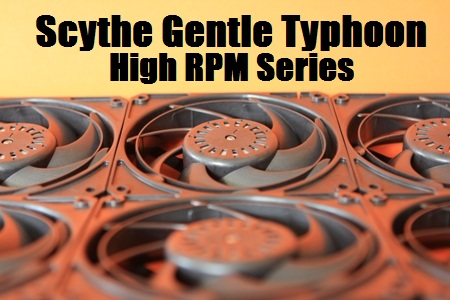 It's important to remember from the outset that these fans were originally intended to be used in the IT industry, specifically to keep large volumes of air flowing over rack-mount systems, or in other situations where airflow and CFM is more of a concern than noise levels.  Why do I mention noise?  Well take a little look back at the dBA figures and you'll see why.  These fans are loud, and I mean  ear bleedingly loud.

That said, as we're always up for a bit of madness we couldn't help wondering how much of an effect the GTs would have on the components within a standard PC.  To that end we'll be strapping these babies to an air cooler and a water cooler, as well as looking at some other ways in which they can be used.

For this test we took the Zero Infinity Free Flow+ cooler.  A twin stack cooler with 5x8mm heat pipes.  Having removed the 3 stock 140mm 1200rpm fans we attached 2 of each speed of GT to the cooler in turn before running the torture test at various clock speeds, with kit and voltages etc as per our usual CPU heat sink testing  The theory being that by attaching high speed high RPM fans we'd be able to significantly lower the CPU temp and squeeze out enough performance to enable a higher overclock than that possible with just stock fans.

To put these results into perspective we need to know that with it's 3x140mm 1200rpm fans the Free Flow+ returned a Delta T of 64.75 degrees at 4.2 GHz.  The figures above show that the 2x3000rpm fans don't manage to bring this down much further.  Moving to the 4250 we see that there has been a drop of 6.75 degrees over the stock fans giving a Delta T of 58 degrees.  Finally moving to the beasts that are the 5400rpm units we see that they've only managed to drop the Delta T by an additional 0.75 degrees over the 4250s.  This would indicate that the ability of a CPU cooler to move heat away from the CPU is as dependant on the heat transfer at the contact plate an transmission up the fin stack as it is on the ability of the combined fins and fans to dissipate that heat.  In short, if the cooler can't get the heat away from the contact plate of the CPU and up into the fin stack, it doesn't matter how much air the fans push through the stack.

For this test we used the Zalman CNPS 20LQ.  If you've read the review of this cooler you'll already know that the fan it comes with is quite loud at full tatt.  Quite loud, but not nearly as loud as the GTs.  Seriously chaps, don't think for a second that any of these GT fans can be used for every day cooling.  Having removed the stock fan we actually fitted a pair of the GTs either side of the radiator, set to pull cool air in from the outside of the case and as such maximising the cooling capabilities of the 20LQ.  having seen the air cooler fail to reach 4.4GHz, and knowing that the Zalman on staock fan can hold 4.4GHz at a Delta T of 63.75 we set about finding out what the GTs could do.

The results although better follow the same pattern as with the air cooler.  There's little difference between the stock fans and the 3000rpm models, with both giving Delta Ts within a degree of each other.  There's then a bit of a step down in temps with the 4250 fans giving a Delta T of 59.75, and then only a very small step of 1 degree down to 58.75 when we use the 5400rpm model.  So again we're left with the conclusion that fan speed and CFM only impact on the cooling ability up to a point, and that once this factor has exceeded the coolers ability to Moe heat away from the processor the gains are negligible.

For this test  we used the GTs essentially as case fans blowing air directly into the intake of the GPU.  For the test I used my old faithful ASUS EAH5850.  I've overclocked this card on more than a few occasions from it's stock configuration of 7.25MHz engine, 4000MHz memory and a Vcore of 1.097.  I know that it will handle a Vcore of 1.3volts with it's internal fan set at a rather whiny 100%, but have always wondered how much higher it will go.  I started of the test today at the highest i've taken the card to previously, 950MHz/4700/1.3V, with recorded max DeltaT temps as 63 for the TMPINO and 80 for the GPU (ambient room temp is 20 degrees).  At this setting it can be a bit flaky for benching and either returns a score or crashes.

We can see that positioning the Gentle Typhoon fans adjacent to the air intake of a GPU does have an effect on the cooling of the card, with the 5400rpm model dropping the cards temperature by a full 10 Degrees.  This drop in temperature enabled a higher Engine and memory frequency to be used on this occasion enabling the card to complete the bench test at 1000/4800/1.3V with temps not exceeding those used at the lower clocks with the slower fans.

No I am never going to consider buying any unless I design a battery powered light aircraft and need an engine.Quote

SieB
Good fans, not suitable for your normal rig though.

clone38
Keep small kids and cats well away from these

ExplosiveToaster
I think it's good to see how companies like Scythe are making server grade products available to the "general public"...