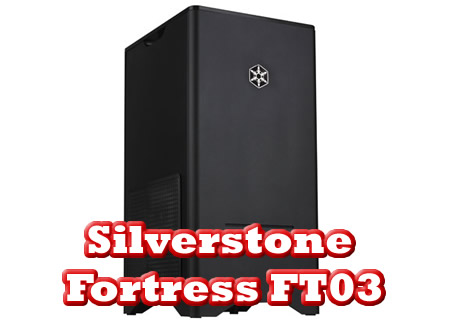 Silverstone have had their Fortress series out for some time now, yet this is the first time one has graced the pages of OC3D. Thankfully though it's not the first time we have seen a Silverstone chassis that utilises one of, if not the, very basic law of thermodynamics: heat rises. SO when designing this range of cases Silverstone decided to incorporate this very basic characteristic and have the cool air coming in the bottom and the warm air straight out the top. This did how ever bring with it some design issues, most noticeably the fact all the cables are now at the top rather than at the back of the case!

The design for the FT03 was somewhat more complicated however. Silverstone decided they wanted to make a case with a much smaller footprint and build upwards, rather than back like they had with other chassis which were noticeably deeper than a normal case. Building upwards required some serious open minded designs and that's what we are here to look at today. Is this a step too far, or are Silverstone on to a radical winner?

To get a better idea of whats Silverstone's goals are for all their products let's take a look at a snippet from the philosophy section on their website:

SilverStone Technology’s philosophy is based on our recognition that merely having innovative expertise within the industry is not enough. Our objective is to ensure that our expertise is delivered to all products with consistency, in response to user’s needs, and with maximum user satisfaction.  SilverStone Technology thrives on challenges of rapid technological advancements and creating aesthetic standard for the industry.

Some very big claims there, but rather than dissecting the exact meaning of it let's just move swiftly on to the specifications before we make the tea and biscuits and get comfy for the video.

I've been sat here for about an hour now trying to work out how to start this conclusion. I wanted to cram so much in I just could work out how to get it going. The fact of the matter is this case could have gone so very very wrong by being overcomplicated. Its definitely never going to win any awards for simplicity but any one actually able to match the right blocks for the cut out shapes on childs toys should just about be able to build a decent and tidy rig in this case.

CPU heatsink and GPU's do need to be thought about carefully but, at very worst, you do have the option to remove the case fans. It's worth noting something I missed in the video that if you do remove the fan for the GPU area you can still fit 2x 80mm fans in the floor to help provide airflow.

Something people have been worried about was hard drive temperatures because there is no active cooling. I've never really had any hard drive heat issues with what I'll call a normal drive though, unless you are running something that's notoriously a bit warmer like the WD Velociraptors I really don't foresee any heat related problems in this area.

With its small foot print and sleek exterior design I really can see this chassis being very popular with some one short on space or looking to build a slightly more powerful HTPC/cross over gaming system for their front room. I can also see this being a very popular case for people low on space where the case is built upwards from a small footprint. Managing this and keeping everything inside and outside in check definitely deserves some Brownie points.

The internal design is very well thought out and is much better to use in reality than I first thought. Silverstone definitely deserves the OC3D Innovation award for the design of the chassis and a Silver Award for the case as a whole.

Thanks to Silverstone for the FT03 tested today, you can discuss this and many other topics in the OC3D Forums.

sheroo
I know you ain't got the time to do a full build for each case. But I would have loved to have seen you put a full on gaming system through its paces in that thing. Rip those 120mm fan mounts out. get a D14 in there, dual 80mm fans in the bottom and see how long you could go on a gpu.Quote

SieB
Nice little case from Silverstone even though it's a bit restrictive with the fans being the way they are, but it's all good for cooling and air flow.Quote

sheroo
For me the only thing missing would have been a grommeted hole at the top and another one in the floor so that if you wanted you could run the video and other cables behind the motherboard tray and out through the bottom. This for me would have finished the clean look.

I think that this could make an awesome gaming rig, more innovative than the SG07 and much better looking.

It reminds me of the Apple Mac G4 cube.

If they hadn't gone with the hot swap bay, they could have had a vertically mounted dvd drive and kept the front completely clean.Quote

jonowee
saw the video yesterday... agh, magnets! Like the RV03 and the NZXT H2, magnetic tacked on junk should burn many points off. I thought the case was crampd when I saw it last year, but now with TTL look inside, now I'm claustrophobic.Quote

dugdiamond
perfect for a web-surfer - small and compact

terrible for a power-user - not enough air OUT, for my liking

ALL those locking plastic panels will wobble after time, adding to vibration noise levels