Cooling is where both the Raven and Fortress cases have traditionally excelled themselves.  The RV05 if you remember was able to take anything up to a 360mm rad in the base and with the FT04 the story was much the same up front.  But before we dive into the wet stuff let's first have a look at traditional air cooling.  With the FT04 being quite a wide case it's able to accept tower coolers up to 162mm in height, and owing to the rotated design it's best to mount them facing down and pulling air upwards.  As space is at a premium along the anterior edge make sure your cooler isn't too wide, and of course if it's one of those that require access under it to secure retaining bolts then you're going to have to attach it before you insert the motherboard. 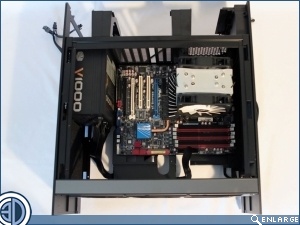 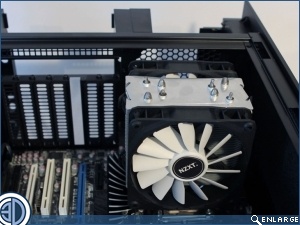 At this point in the review we were hoping to show you how our XSPC 360mm radiator dropped nicely into the base as it did with the RV05.  Sadly though it won't fit.  The difference between the cases, and the reason for this lack of compatibility is the small white plastic structure that houses the lighting for the front of the case.  Thin though it is, it shaves off vital millimetres.  Silverstone do claim 360mm rad compatibility, with a sheet in their instructions giving rather confusing measurments with regards to clearances, but basically, if your rad has end tanks bigger than 15mm from the edge of the rad cowling it isn't going to fit into the FT04.  You can see in the images below right that even an AIO, with relatively small end tanks only just fits, with the edge of the tank hard up against the white plastic.  In their literature Silverstone quite 31.8mm of clearance as being available from the edge of the fans at this front edge.  In reality our measurements suggest that they have taken this measurement not from the edge of the fan but from the centre of the fan mounting holes, which as we know are a fair bit in from the edge of the fan and even the edge of a radiators cowling. 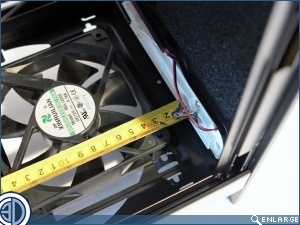 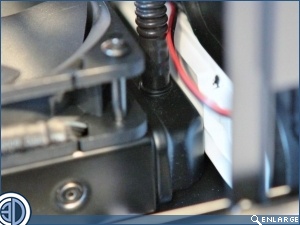 Things get marginally better with 240mm and 280mm rads as these can be accommodated by turning them round to place the end tanks away from edge of the case.  To our eyes they look a bit odd this way round and invariably will cause challenges if you want to achieve a tidy and aesthetic loop, but at the end of the day if you want custom water in this case that's the route you're going to have to take. 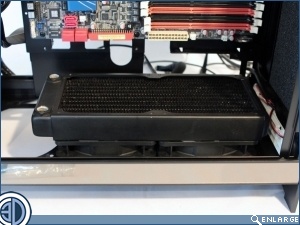 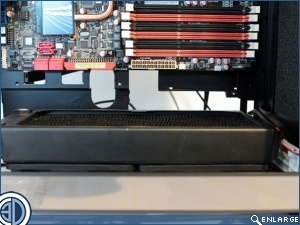