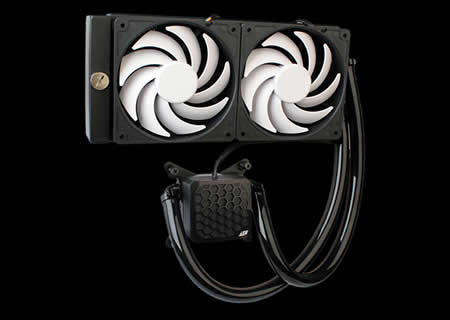 So normally people skip to the conclusion straight away, well give yourself a good slap and go back and look at the testing page or you wont know what we are going on about here will you! Go on.... I mean it.....

Right so let's make a start, because one of the big watercooling brands has waded into the battle of the AIO's all expecting great things, we were one of them. Its a mixed bag though because some things are good but to us there's a great deal wrong with this also.

We reviewed the older 'H' kit from Swiftech a while back where the pump was mounted in the radiator, how this design got past R&D we'll never know because it just the vibrations from the rad/pump combo were so bad we told everyone to avoid it like the plague.... Unless you were deaf and your case sits on the floor!

Thank lord this time the pump is in the CPU block just like the Apogee Drive II so we had high hopes this one would be quieter. Its not hard to be quieter than the old one but this is the loudest pump of all the AIO's we have tested. Sure you can run the pump from the motherboard and slow it down but all the advice we have ever given with these units is run the pump from a molex to ensure its getting a solid 12v. If you turn the pump down your temps will go up.

The fans that come with this even though we ran them at 12v were not over powering. We were very surprised how much air they moved compared to how much noise they made. Sure if we were to set this up ourselves for a 24/7 rig we would have it quieter but as there is no fan speed reducer in the kit to keep things fair we just ran them at 12v to see what the default  scenario was.

Temperature results were not what we expected, we ran this with everything at 12v, compare that with the H100i also running at max and it beats the H220 every time. The Swiftech fans were quieter but the pump was considerably louder. Considering everyone shouting about the stronger pump and proper watercooling radiator the results are very surprising. It also firms up our thoughts on that you shouldn't even think of adding a GPU to this kit. You may well be happy with warmer temps and noisy fans, but we are not. Our standards are higher than that.

So now on to the bit people have been shouting about since this was first seen in Vegas.... expandability. You can indeed take it all apart, add a reservoir, add a GPU block and even add more rads (lets face it it will need it if you add a gpu). This though is where we are likely to take a much different view to pretty much everyone else. What's the point?

We honestly thing this is a step too far towards a custom kit, our advice would be this: buy an all in one unit for your cpu only OR buy an all out custom kit. If you were thinking about getting this and adding a gpu, res, extra rad you would honestly be better off going 100% custom. You can base it on the Apogee 2 if you like the CPU block & Pump idea but we would advise getting a decent block and using the Laing D5. If you go 100% custom you will end up with a better looking, better performing system.

So all in all it performs well at lower clocks but loses out when you really push things. The pump is noisy and the hose is so long it looks untidy. The whole expandability thing completely goes against what an 'all in one' unit is about and is more of a prebuilt water cooling kit. Our advise - buy the H100i or a proper watercooling kit.

Official pricing has now been released and SpecialTech have listed it as £106.99, this is significantly lower than expected and because of this as promised in the video we are changing the award to a Gold award.

Thanks to Swiftech for sending us the sample in, you can discuss your thoughts in the OC3D Forums.

Will read it once I'm homeQuote

FlangeBBK
I have to say I'm quite disappointed with this unit, I expected it to be much better tbhQuote

Excalabur50
What an orrible looking unit such a shame really.Quote

Vlada011
I look performance on 4.6GHz and for me that is enough.
Same I am disappointed...
Good old H100 if you want cooler for one platform. Because this is throwing money for custom loop. For that money you can buy almost, D5 Koolance PMP-450 and XSPC Dual Bay Res for D5 Vario...If you want GPU and CPU under water this is minimum... For proper water cooling...

Now situation is clear, Hydro series forever or real loop, no kits, combinations,... carefull choose parts, pay twice like H220 but you have system for every platform.Quote

UkGouki
tbh i think the h100i looks better and now we seen the performance of this its a no brainer..

if i had the cash and a case that i didnt have to mod to fit one of these i would choose the h100i over the swiftech on pure looks alone + price/performance i.e bang for buck..Quote
Reply