When it comes to PC cases, Cooler Master is one of the largest brands around, with designs that span as far back as 1992, the year the company was founded.

Over time the company has created iconic cases such as the Cosmos series, expanded to offer a worldwide reach and offered its OEM services to support giants like Nvidia, AMD and EVGA over the company's history.

Now, Cooler Master has launched a new case into its Silencio line, offering full-sized ATX and MATX offerings in the form of the Silencio S600 and S400, with hopes to deliver "best balance in silence, thermal capability, and value". That quote is from Cooler Master's review guide, a document which overviews the features, specifications and selling points of the Silencio S600.

To develop the Silencio S600/400, Cooler Master partnered with Sorama to create what they see an "an affordable chassis with performance figures that challenge higher-priced competitors." In this review, we will test these claims by looking at the Silencio S600, though those who have read the title above will know where this is going.

To set expectations, here are the price tags of Cooler Master's S600 and S400 series cases, which are now available to purchase in the UK. These values came directly from Cooler Master.

The Silencio S600 is a case that ships with two distinct versions, an all-steel version and a tempered glass version. The all-steel version will ship with a steel side panel on its left-hand side, which features sound dampening material to ensure minimal noise output. The Tempered Glass version uses a tempered glass side panel in the same location, which allows users of the case to peer inside the enclosure.

At the front of the S600 Cooler Master States that up to two 120mm or 140mm fans are supported, though mounts for an additional fan are present, albeit in a sub-optimal location. Up to a 240/280mm radiator is also supported at the front of the chassis, with an additional 240mm radiator being mountable at the top of the enclosure, assuming no optical drive is installed.

One semi-unique feature of the Silencio S600 is the inclusion of an SD card reader, which links to the system using USB 2.0, which will limit the performance of some SD cards. Even so, this is a nice feature to have, especially if you don't own an external SD card reader.

The fans that are included in the Silencio S600 are Cooler Master's homemade FP120 fans, which feature an IP6X dust resistance certification, and operates using a 4-pin PWM fan cable and can offer speeds of between 800 and 1400 RPM. 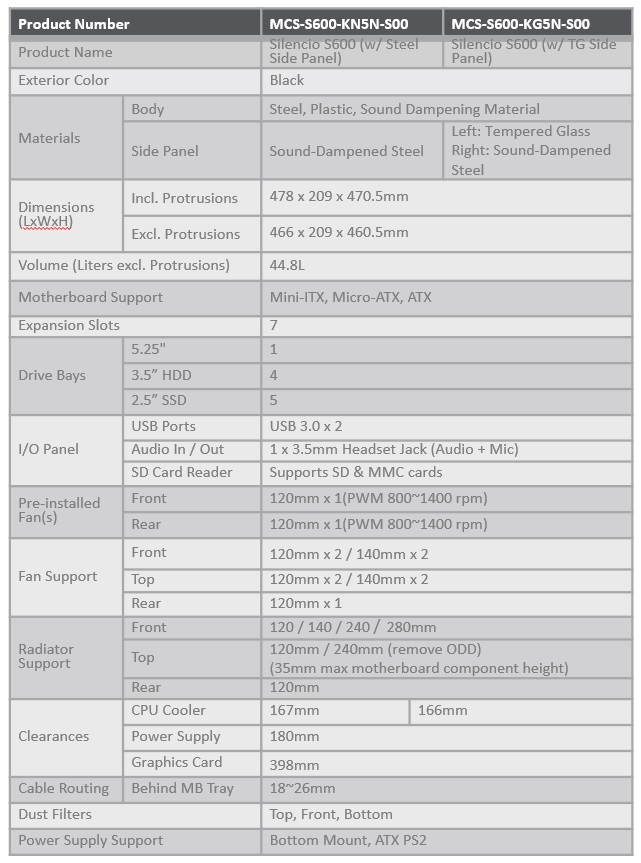