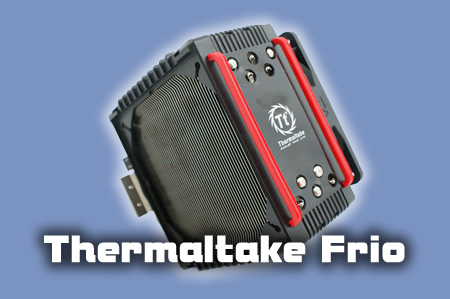 Fitting is nothing short of child's play. We have had many heatsinks through the OC3D labs and yet we still find the need to read instructions of the 3D jigsaw puzzles some manufacturers come up with. Thankfully Thermaltake kept it simple, you just find the adapter arms for your motherboards CPU socket and screw them into the base of the cooler. Once the arms are fitted you fit the cooler to the board, slide the backplate over the bolt threads and use the nuts to secure it all in place. 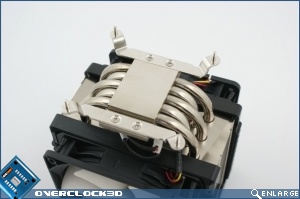 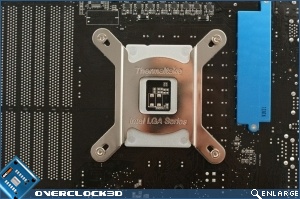 The Thermaltake is sold as a heatsink for overclockers so it's only right we test the heatsink at levels every single clocker in the land regards as the target they want to reach. Of course we mean the holy grail that is 4GHz, and our test system today is an Intel 930 overclocked to the blessed 4GHz with help from a 1.35v vcore and a 200 BCLK.

First of all we tested with the fans at full speed, and believe me they really shift some air. 105cfm according to the Thermaltake statistics. It's because of two fans moving this much air they really are far from quiet. You can easily hear them in the other room, and as I found out in the garden as well! All this airflow did help keep the temperatures to a reasonable 79c.

When on low fans they are a lot quieter but still nowhere near Noctua levels even with the Noctuas at 12v. Sadly with the reduced RPM the temperatures rose sharply and we ended up with a maximum temperature of 88c.

At OC3D we think anything over 80c CPU wise is unacceptable so we decided to see how the Frio would cope at a lower clock. We dropped the vcore to 1.3v and the BCLK to 180. At this level the Frio performed much better. At maximum fans the temperatures leveled out at 68c. At low fans the cooler even kept the temperatures below our 80c goal at a respectable 78c.

So that's the testing done, let's head straight on a wrap this all up.

AMDFTW
shame it doesent perform very well,just wondering how much heat does the i7 chip produce over the phenom 2 as ive heard the phenoms have a lower temp when vs the i7'sQuote

tinytomlogan
I still wouldnt buy it though. Why would you want to when there are better performing sinks for the same money?Quote

ppuff
Looks hot! Too bad it keeps your chip hot though

hadesan
I thought aluminum and copper reacted to each other over time...Quote