With the oodles of headroom on tap above the Motherboard there's enough space for any tower cooler up to 180mm in height, which pretty much means any tower cooler on the market today.  Certainly there's enough space for our trusty Havik 120 to have a party in there.  the only real thing to be wary of if you're planning on a big tower cooler is that it doesn't overhang the sides of the motherboard, as this will bring it right up against the case side panel. 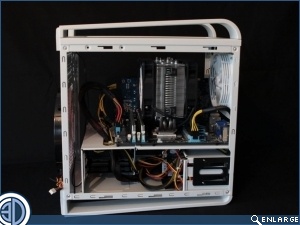 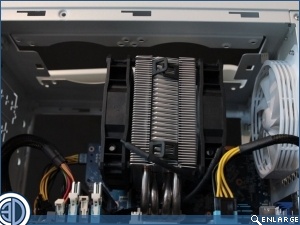 Water cooling though is where it's at these days, and as hoped, despite Xigmatek not making any wet dream claims, it's entirely possible to get a 240 rad in the roof.  Here we've used a AIO from Cooler Master, but there's just enough room to get any standard 240mm rad up there.  With custom loops in mind, and of course with the space available it's a cert that you're going to be able to fit fat rads in the roof, which if combined with the smaller M-ITX board will leave room atop the HDD drive area for pumps and reservoirs.  We did though have to remove the 5.25" bay to get a rad up there, but that's not exactly a disaster.  Sadly, despite having mounting points for 140mm fans there's not enough room at either end of the case to accommodate the end tanks of a 280mm radiator.  There's not a lot in it, and had Xigmatek put in just a little more thought we'd now be talking about how the Aquila could accommodate fat 280s.  Sadly though this is but a pipe dream.  let's not knock it though, what we have here is a relatively compact case that can house a thick 240 in the roof as well as a thick 140 in the front. 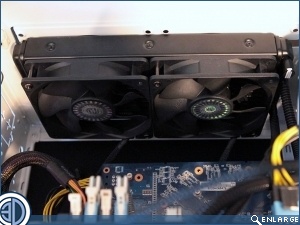 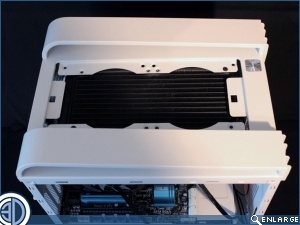 it's well, something different I suppose, strange aesthetics reminds me of a retro 60's portable radiator, but those internals more than make up for it, lots of room for a showy stylish LAN rig.Quote

G-Dubs
Yeah, it's not bad at all, but it always irks me when manufacturers miss opportunities such as the potential extended water cooling that this case could have featuredQuote

vajoiner
wow those usb slots are in a horrible place. that's my kick zone. i envision accidentally breaking many thumb drives. i really need a nice matx case too.Quote

G-Dubs
No point having a great looking case if you're going to keep it hidden under the desk matey.Quote
Reply