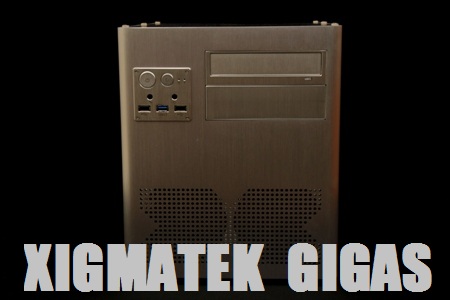 Building into the Gigas is a little like performing open heart surgery.  I don't nean it's complicated and takes ages, it's not, it's more about the way you need to work on the patient, sorry I mean case.  As the only way in is through the roof you are forced to dig down through the drive bays to get the the area where you can start working, i.e installing the motherboard.  The case is able to accept both Micro ATX and mini ITX boards.  I've chosen to use the Zotac M880G-ITX Mini ITX board, very kindly on loan from Zotac, for the purposes of this build.

As the floor of the case is essentially the motherboard tray there's no rear access or cable routing options to take up.  All the wires and cables used must be routed within the case itself.  With that in mind, It would have nice if Xigmatek had found a way of incorporating some cable tie mounts into the interior.  Now as I'm a bit of a tidy cable freak I though I'd set myself a challenge of building this case without the luxury of a modular PSU.  I also wanted to use my modded Orange PSU as Orange is one of Xigmateks signature colours.

With the Motherboard installed we're able to hook the fans up to the fan controller.  For some strange reason Xigmatek have provided a 3 channel fan controller (fed by 4pin molex) for a case that has 2 sets of 2 fans.  This of course means you need to find another way of powering at least on of the fans, and kind of negates the ability to control the speed of all your fans with one single knob.

Next to go in is the PSU. Feeding the cables down and though the gap to the Motherboard, things are starting to get a bit fiddly now. I found myself wishing for an additional elbow or wrist joint on more than one occasion. You really do need to think hard about what order you're going to install the hardware in, because if you forget something you're going to have to take quite a few things apart to get back to where you need to be. 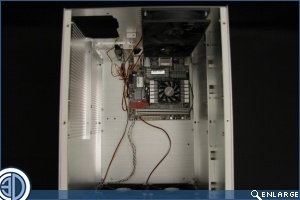 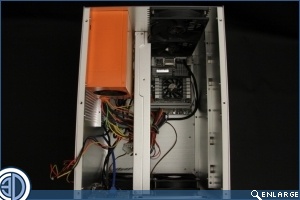 With the PSU in and all the power and data cables attached at the Motherboard end we now begin to assemble the "upstairs" section of the Gigas.  All drives must firstly be mounted into their bays before the bays are mounted into the case.  Likewise if you want to remove a drive you're going to need to take the whole bay out first.  As the base of the upper level 3.5" HDD rack is situated directly over the CPU area on the motherboard below it's good to know that there's still enough clearance underneath to accommodate CPU coolers up to 160mm in height.  With the bay area removed it may also be possible to accommodate taller coolers with the proviso that their other dimensions are not prohibitive. 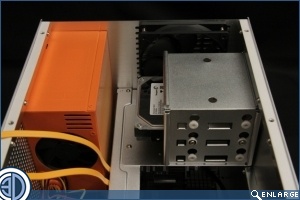 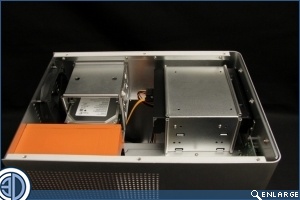 With all the hardware in place, the drive bays installed and everything hooked up I was actually quite pleased with the result.  I had expected to see quite a vipers nest of cabling, but as most of the cabling is on the lower level there's not that much visible to the eye.  However, just because it's not visible to the eye doesn't mean it's effectively managed.  Keeping things tidy down stars was near on impossible as there's nothing to anchor cables to.  All I was able to do was cable tie unused cables together and tuck them over to one side so as to minimise the effect they have on cross case airflow.  More a case of effectively hidden than effectively managed. 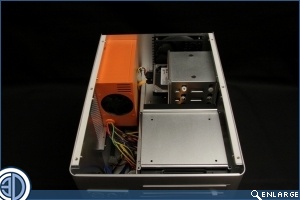 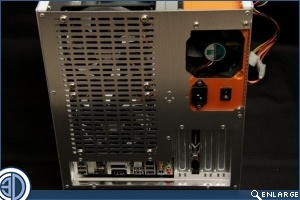 It does look as if its got a bit of an identity crisis. I love SFF cases but this one doesn't quite float my boat.

dipzy
Abit to big and abit ugly for my liking, for a tenner or so more, id rather have the Lian Li PC-V354BQuote

Mr. Strawberry
really think they should of put the motherboard tray on the top

with at completely blank top panel it is just asking for a window to be cut in it so you can have a view of the hardware from the top but sadly you can't :/Quote
Reply