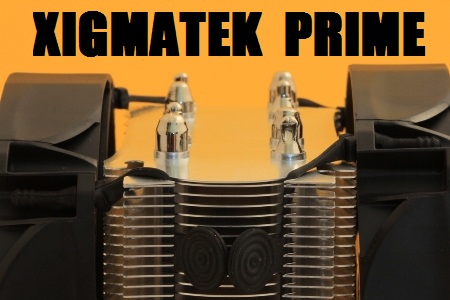 What to make of the Prime then?  Well from the performance figures I'd have to say things are looking up.  I wasn't actually expecting the Prime to do as well as it did.  Having reviewed the Coolermaster Hyper 212 and the Enermax ETS-T40 I was expecting much of the same, mainly because on the face of it the Prime looks to be much of a muchness with the afore mentioned coolers.

The devil is in the detail as they say, and in this case the detail lies in the use of 8mm heat-pipes instead of 6mm, the use of 140mm fans instead of 120mm, and the option to use two of these fans rather than one.  On their own each of these variances wouldn't contribute a significant improvement, but when combined there is a definite difference to be seen.  As the saying goes, "The sum of the parts appears greater than the whole".

Not only does it best the two coolers mentioned above but it's also able to stand toe to toe with a few of the bigger boys, not least of which is the massive BeQuiet Dark Rock Pro.  The Prime is a good £15 cheaper than the Pro but able to outperform it at 4.0 and come pretty close to matching it at 4.2GHz, all that without the RAM clearance issues and the Pro being a bit of a git to fit.  The story is much the same with the Prolimatech Super mega, The Prime pretty much matching performance at 4.0 but being slightly bettered at 4.2.  Again it's worth remembering that the Super mega is a massive cooler with a price tag to match, and that's before you've factored in the cost of the fans.

Quality wise Xigmatek are ticking all the right boxes also.  OK it's not the most glam unit in the world but then if you find tower coolers glamorous and perhaps strangely arousing you probably need to seek medical advice.  It has a good weight and feel about it, the Nickel plating is of good quality, there are no bent fins, no smears or defects on the aluminium and the unit is well boxed and presented.  Add to all that the ease of fitting and things continue to look Rosy.  Damn it, I can't even criticise the instructions (and boy do I love to do that given the opportunity).

So how could it be improved?  Well if I wanted to be really picky (and when don't I) I'd have to say that at full tatt the fans aren't the quietest I've heard on a cooler, the (Enermax's taking that title).  Not actually noisy, just not silent.  The box gives the noise rating of the cooler as 18dB-A however the fans themselves on the Xigmatek website appear to be rated at 21dB-A.  I'm inclined to go with the later figure as opposed to the former, but remember this is purely a subjective rating of perceived noise on my behalf.  Also, remember we do all the testing at 12Volts so the fans are run flat out.  Hook the fans up via the PWM and things change considerably with the fans only stepping up from near silent to a bit of a whir when workload demands.  While were talking about fans, it's worth remembering these aren't LED units, although Xigmatek do make a version of this fan that is.  So don't do expecting any flashy light shows or case illumination.  That said I do quite like the waveform styling and the nice touch of the twin silver styling strips on the leading edges of the blades.

Who knows?  But they certainly seem to know a good baker.  Let me explain.  In my life I know I can do some things well, my core business as it were, but baking just ain't one of those things, so if I need a cake baking I go to a baker and tell them what I want.  It's exactly the same with a lot of manufacturing, and not just PC components.  If a company wants something making it will tend to go to an OEM (Original equipment manufacturer) and ask them to make something to their own recipe.  They use the skill of the 3rd party baker to make the cake that tastes the way they want it to at the price they want to charge for it

It's not surprise then that when you look at Toms review of the Havik that you will see more than a few similarities with the Prime. Essentially the Prime is a Havik with 2 less heat pipes. Everything else right down to the fans are exactly the same. Mainly because they are made by the same people in the same factory..... Xigmatek.

None of this should detract from the point that the Prime is a good cooler, but then it should be, it's made by a good baker. Throw into the mix that you can pick this up for a smidge under £40 and it gets hard to resist such a tempting offer.

Thanks to Xigmatek for the Prime on test today, you can discuss your thoughts in our forums.