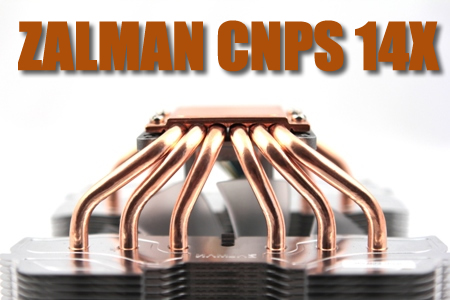 If you've read any of our cooler reviews before you'll know that we often refer to what we call the "Holly Trinity".  By this we imply that a cooler has 3 jobs to do.  Be quiet,  look good and of course keep things cool.

The Zalman CNPS 14X is certainly a quiet cooler.  With a 4 pin PWM controlled fan it emits no more than 21dB at full tatt and a mere 17dB when the demands on it are rather less.  In real terms, even at it's full speed of 1350 RPM the noise coming from the fan is barely noticeable, and when idling at a mere 950 RPM you could almost refer to it as silent.  Hardly surprising then that it wears the Computer Noise Prevention System moniker.

With regards to looks, the 14X is eschews a great deal of the bling and glitz often associated with coolers these days, opting instead for a more classic and simple look.  The twin sculpted fin stacks are penetrated vertically by six equally spaced heat pipes.  There's no fancy plastic shrouds, or stylish bolt type heat pipe terminations here, just good honest basic engineering.  Heck there's not even an LED fan.  With only a small black plastic cap covering the central portion of the heat-sink we can at least be assured that the cost of manufacture appears to have gone on engineering and not design frippery.  We also can't help thinking that leaving out a lot of the plastic has in no small part enabled Zalman to bring the 14X to Market at the price they have.

It does have to be said that the 14x doesn't perhaps perform quite as well as we were expecting it too.  With our roasty toasty i7 set up things got fairly hot at 4.0GHz and too hot at 4.2GHz.  As the temps were in fact much higher than we expected we actually re mounted the cooler three times and re-ran the tests, each time with a similar set of scores.  It's hardly surprising though that the temps weren't exactly sub zero, as the low RPM low noise fan can hardly be expected to shift the air over the fins in the volume that would be required to keep the CPU as cool as we might like.  Further evidence of this was gained by simply placing a hand on the upper part of the fin stack and heat pipe terminations.  Their being warm to the touch indicated that the heat was getting away from the contact plate an up into the stack, but just wasn't being effectively dispersed by the fan.  It's very probable that attaching a set of additional 140mm fans with the clips provided would remedy this situation, but then that ups the price and most likely the noise output.

We've said that the cooler has a simple design, but by no means is it simple to fit.  Actually verging on impossible without removing the Motherboard, and still difficult with the mobo out of the case.  This isn't a problem isolated to the 14X though, as there are other large coolers out there that have similar problems, that said, there are also some rather elegant solutions out there that see large coolers considerably easier to fit than this one.  However, unlike us, you most likely don't change coolers as often as you change your under-ware so if you can put up with a bit of a fiddle, once it's in it's in as they say.

Having summed up the positive and negative aspects of the 14X ist's important that we add a sense of perspective.  So it doesn't perform as well as some of the other big coolers on our graphs, but then neither does it cost anything like as much, orfor that matter make nearly as much noise while doing so.  At £34.99 the CNPS 14X is really well priced for those on a budget but might be looking for the big cooler looks, and while it might not be able to handle a hefty overclock on the toasty i7 1366 platform it should be more than capable of keeping sandy Bridge Processor such as the ever popular 2500K cool even with a modest overclock.  Should you want a bit more performance, well you can always strap on another pair of 140mm fans, but its at this point we would advise taking that extra money you would have to spend and looking at a different cooler.

Thanks to Quiet PC for the sample on test today, you can discuss your thoughts in the OC3D Forums.

Bang
While I'm no expert at keeping Sandy Bridge cool, I couldn't help but look at those temps, even with the 19c ambient, and thinking 'Mmmmm, not good'

Thanks for the warning mate.Quote
Reply