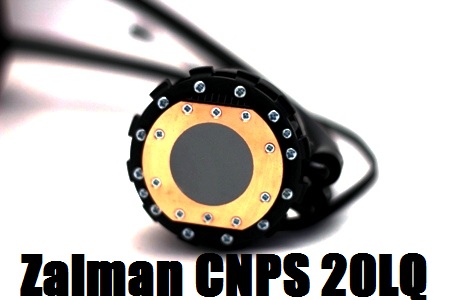 Some of the clearest instructions I've ever come across make the firring of the 20LQ a much easier process than it would otherwise be.  The method used is much the same as for other sealed system coolers and is a multi stage affair.  A back plate is attached to the rear of the mother board via two adhesive pads.  Small internally threaded grommets are then plugged through the holes in the back plate which coincide with those in your motherboard (a single back plate is used with a selection of holes depending on your socket).  Turning to the water block 2 thin steel rings are secured around the water block, which is then secured to the back plate via threaded knurled thumb bolts.  This was about the only bit that's a fiddle as there didn't seem quite enough initial length on the threads to get them to engage easily with the threaded grommets.  A few swearies were uttered which is never a good sign.

Unfortunately the woe didn't end there.  As what should have been the simple act of attaching the fan and radiator threw me a few more curve balls.  The instructions say that the Radiator should be attached to the rear of the case and secured in place with screws from the outside, much as you would attach a case fan.  The fan is then attached to the inner aspect of the radiator pulling air from inside the case and exhausting it through the rad to provide the cooling.  Unfortunately in one of the cases I fitted the 20LQ to there was not enough clearance around the rear 120 fan mount to allow the radiator to be placed, necessitating a bit of lateral thinking.  The result was the fan mounted on the case and the radiator attached the to fan internally as seen in the pictures below.  In this set up the fan pulls air in from outside the case and passes it through the radiator to the inside of the case.  As I was concerned that this may have an effect on temps and thus performance readout I tested the system in both configurations and it made as near as makes no difference (0.5 of a degree if you're interested).  The final part of the process is to attach the power.  The fan is fitted with a PWM plug so rpm can be controlled via the motherboard or suitable fan controller.  The pump is powered by means of a 3 pin fan plug from any Motherboard header. 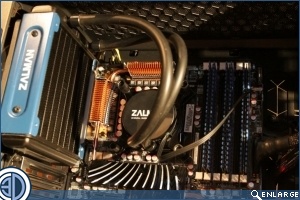 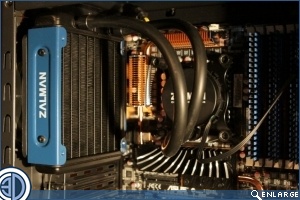 YogevSkill
Not too shabby, though the H100 & H50 are a better bang for your buck.

ArjenIsM3
Nice review fella, though I can't say I like these "H2O" coolers much. I prefer a good old fashioned chunk of metal!

Remember for every increase of 10dBA there's a perceived doubling of the noise output..

Don't you mean for every increase of 3dBA?

Could be mistaken though, but in that case I'll have to report my physics teacher!

Coolant
Hi (first post but lets just forget the formalities, shall we? :P)

So I got this kit for roughly 40â¬, it was a pretty good sale I recon. I had a Thermalright True spirit before and while it did it's job, I wasn't really keen on trying to push my 2600K past the 4.5Ghz... not with those temps. I just saw the unit on sale and thought why not, at least I'd get to try something new.

So I figured that I had a couple of GT's unused, forget the bundled fan and throw it in as a push-pull setup. The GT's are AP-13's though (1150 RPM) and... well, would such low-rpm fans be enough? Or am I better off using the stock fan?Quote
Reply