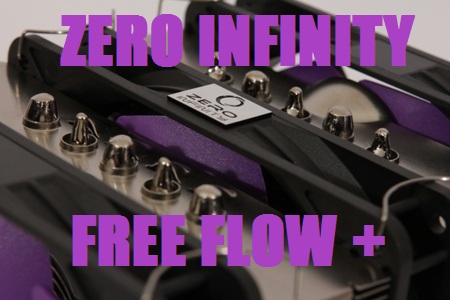 Oh dear......Oh dear, Oh dear , Oh dear.  This was not a happy experience.  Lets start with assembling the cooler itself.  As the fin stacks weren't parallel to each other, being considerably closer to each other at the top than the bottom, it was a heck of a job to get the central fan into position.  Granted I was assured in the process that  the copper tubing used must be quite thick as efforts to prize the two towers apart were met with a lot of grunting and swearing as they didn't want to be parted more than a few mm, but the thickness of the copper used wasn't really the point here.  The fans themselves are held in position by some "less than subtle" fan clips which almost make the cooler look like it has an array of antennae.

Fitting to the mother board necessitates the removal of the motherboard, regardless of the size of any motherboard tray apertures, as the retaining bolts on the front side just cannot be accessed with the motherboard in place.

The fitting process is not made any easier by the worst set of instructions I have ever seen.  granted they are are stylish with a white on black "negative" appearance, but I would rather have substance over style.  Let me put it this way, I was genuinely in the dark about which parts I was meant to use, and where they were meant to go.  Add to that that the front side bolts retaining the rear back plate tighten directly onto the front of the motherboard and you're asking for trouble.  It was with trepidation that I powered the system on, expecting a short to occur and my Mobo to go up in a puff of smoke.

In fitting this cooler I actually had to walk away from it a few times as it was infuriating me that much.  In fact at one point I left it and went to bed figuring that at least that way I would resist throwing it through a window.  I could continue, but I think you get the picture.

Once fitted the cooler dominates the inside of the case.  It's sheer size dwarfing the rest of the components inside. 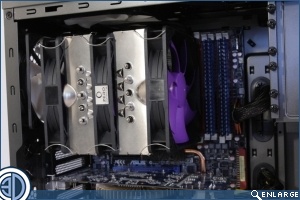 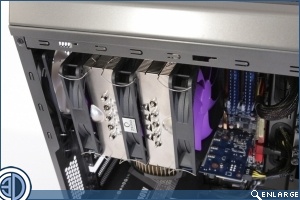 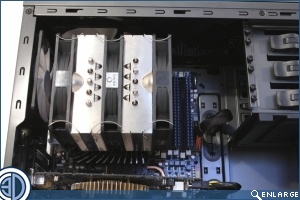 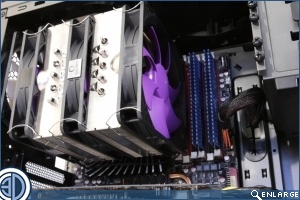 SieB
I'm liking the purple fans, shame about the performance and price though.Quote

Josh Weston
Good review, just a shame about the lacking performance at a ridiculous price.Quote

RzrTrek
Lovely review.. indeed, we would be better of getting ourselves an Noctua NH-D14!

Lisa
Nice review, thanks. Purple is my fave colour and I wouldn't buy this. It looks garish and cheap. Aesthetics aside, you'd expect a twin-tower triple-fan to perform well or are they using the third fan just for marketing or to make up for some shortcomings? Either way, going by your results, they've failed.Quote
Reply