With AGESA version 1.0.04 focusing on memory latency, it is only logical to check whether or not AMD has continued to improve memory latency with AGESA 1.0.0.6.

Sadly with AGESA version 1.0.0.6 and ASUS's new 9945 beta BIOS showed almost no improvement in this regard, showing a mere 0.5% decrease in memory latency. This change was consistent with multiple benchmark runs but it is certainly nothing much to write home about.

With AMD already improving memory latency by 6% with AGESA version 1.0.0.4 it is difficult to see AMD further reducing this number by another large margin, though it will be interesting to see if we can decrease this number by using faster DDR4 memory or memory with tighter CAS timing in the future. 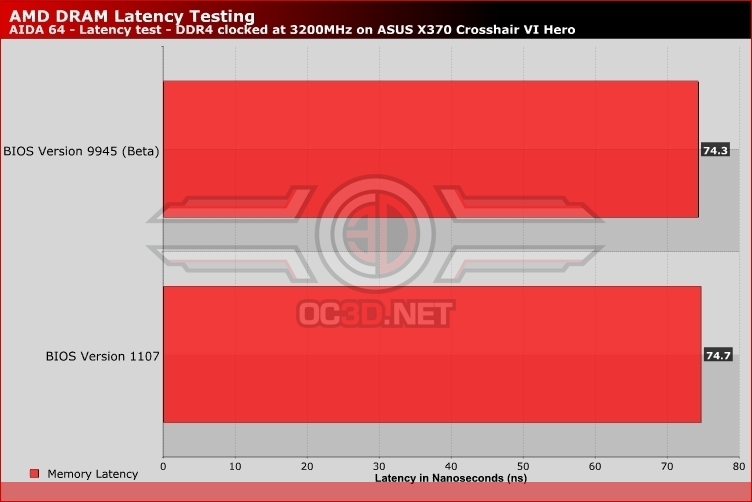 Moving to memory speed we can see that there actually is a notable performance difference with this new BIOS version, though again this performance change isn't that large in the grand scheme if thing. We see Copy speeds in AIDA 64 go almost unchanged while Read performance increased by almost 3.2% and write performance decreased by 1.05%.

Both the copy and write performance here is very similar, the boost in read performance is noteworthy, though it is impossible to tell whether these performance changes are due to AMD's new AGESA microcode or due to other changes in ASUS' beta BIOS. 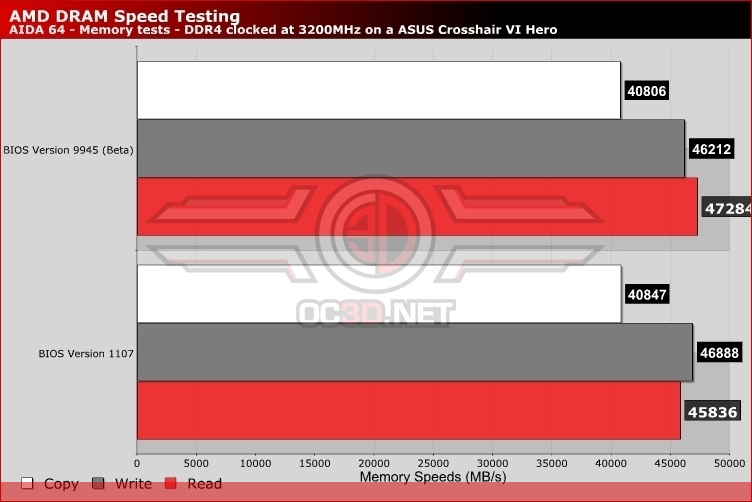 stealth80
Shame you didn't run those gaming benches with faster ram. The main selling point of Agesa 1006 is access to faster than 3200mhz ram speeds and as we all know - that has a massive effect on the latency across the infinity fabric, especially in gaming.

WYP
Quote:
This is something that we are looking into. Sadly right now we do not have faster DDR4 to test with, but we are working on acquiring some.

To put it simply this testing is to see if there are any performance benefits from this new update without any hardware changes. From here we will be looking deeper into this new BIOS options and conduct further testing to see where we can gain additional performance.

This testing will act as a platform from which more in-depth testing can be done, hopefully allowing everyone to learn a little more about Ryzen in the process.Quote

In the meantime, I will just sit here and wait for Agesa 1006 to release for the Gigabyte Gaming 5, contrary to some articles online, the current beta bios for gaming 5 is based on Agesa 1005

AngryGoldfish
3000-3200Mhz memory is still likely to be the sweet spot though. That's what I predict anyway. And even if performance scales well past 3200Mhz, the price increase, the low availability, and the high timings for high speed memory might put people off.Quote

Oh and by the way, unless those Corsair sticks are Hynix chips, you should probably not be using 9945, which is really for 4 sticks or some HYnix cases. The recommended version for two sticks of Samsung would be 9943, which should result in better results.Quote
Reply