We will have a review out for both of these CPUs on February 12th, but for now, we can discuss everything that AMD has made public so far, including a comparison on the specifications of these APUs and Microsoft's current generation Xbox One S console. 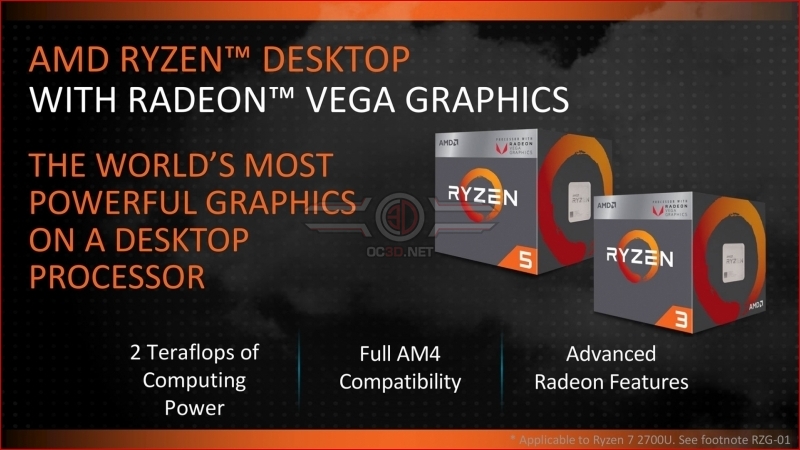 These two new APUs, AMD CPUs with integrated Graphics for those that don't like shorthand names, will replace the company's existing Ryzen 3 1200 and Ryzen 5 1400 CPUs, neither of which offers integrated graphics.

The Ryzen 3 1200 and Ryzen 5 1400 both use a cut-down version of AMD's 8-core Ryzen 7 1800X, making them an inefficient design when it comes to die space, as half of the product is deactivated. With Raven Ridge, had decided to make a dedicated quad-core CPU design with an integrated graphics component, allowing Ryzen PCs to be built without a dedicated graphics card and ship quad-core CPUs without as much deactivated/wasted die space.

Raven Ridge will offer higher clock speeds than their standard Ryzen counterparts, though both the 2200G and 2400G will offer less L3 cache, which will have a performance consequence. This change is counteracted by the products use of precision boost 2 and its higher clock speeds, though it is a notable downgrade.

The 2200G and 2400G will also offer fewer PCIe lanes for GPUs, offering eight lanes instead of the sixteen that are provided on AMD's enthusiast desktop Ryzen parts. Both chips will have an additional four lanes for an M.2 SSD and four lanes for the chipset, the same as other Ryzen CPUs, though the use of only eight PCIe lanes does limit the GPU and Add-in card options of Raven Ridge users.

TBH, Raven Ridge users would be insane to use this CPU for SLI or Crossfire, so the real-world problems here are limited, though it is a change that is worth noting.

Given the small price changes when moving up to AMD's Raven Ridge series processors, it is hard to see these products as anything but good value, as users are getting higher clock speeds and what is effectively a free integrated GPU component.

Giggyolly
I thought these APUs were too good to be true TBH, but I can see there are now some drawbacks with the new quad core design.
That being said, they seem minimal, and look to offer some really great low-end value parts.
I occasionally do office PCs for friends and family, and these could replace the i3s I'd usually opt for!Quote

AlienALX
Quote:
Expectation. People have very high ones, then you find yourself let down all of the time. The trick is to have none, and see the product for what it is. IE - a cheap, dirty little APU that can actually game. Meaning you can have a tiny rig that doesn't bust your bank account and run games on low settings.

This idea was enormously popular with the original AMD APUs. Even though the on die GPU was crap (6670 or something) it enabled people to just stick one in and game without the added expense of a GPU.

And yes, the GPU area on this should piddle on Intel's best tbh.

Over the coming months I fancy building a Sega AM3 only box. Running Supermodel. This would be absolutely ideal for me

RobM
Speaking from experience as having gamed AAA titles on an APU, ie my last setup was an A10 and I was able to play with reasonable setting @ 1080p without any real problems except when things got really busy on screen such as late game HOI or Arma3 but for the most things were pretty fine.
This new generation I bet will be far superior and akin to an ryzen 3 with a 750ti or betterQuote

It's possible that with overclocking and fast RAM it will be 1030 level, but I'm not setting my expectation that high.

Like AlienALX said, keep your expectations low and you won't be disappointed.

(My personal expectation is that a 2200G will play games better than my current Phenom II X6 1090T + Radeon HD 5750. If this happens it will be good enough for me.)Quote

AlienALX
Yeah I think that is a bit hopeful tbh. I think it will be more of a case of "Hey look, this thing can actually run games... Just about" than "750ti high settings 1080p !".

All that matters is that it kicks Intel's IGP's ass. Anything else is a bonus