Assassin's Creed Origins is a title which is almost unfair to test on our APU, being an incredibly demanding title while also being incredibly biased towards Nvidia GPUs. To get this game to become playable, we have to aim for a steady 30FPS, especially when looking into demanding areas like Alexandria.

If you look at our Assassin's Creed Origins Performance Review, you will see that the game is incredibly demanding on PC. In this case, we need to turn down the settings very far, though we found that there were a lot of areas where we could increase the game's graphical fidelity without a significant impact on performance.

The demanding nature of this game led us to create "Optimised" settings for Assassin's Creed Origins, which mostly involved upping the game's texture settings to enhance the overall look and feel of the game. As you can see in our table below the average framerate in our test area lowers by around 0.4 of a frame on average.

Our test area in Assassin's Creed Origins is in gameplay, utilising the game's Discovery mode to reload the title at the same time of day and location every run, running through Alexandria, one of the most demanding areas in the game. If you can maintain a steady 30FPS in Alexandria, you can achieve that framerate pretty much anywhere.

Our final benchmarks for the game are available at the bottom of the page, comparing both APUs at several resolutions. 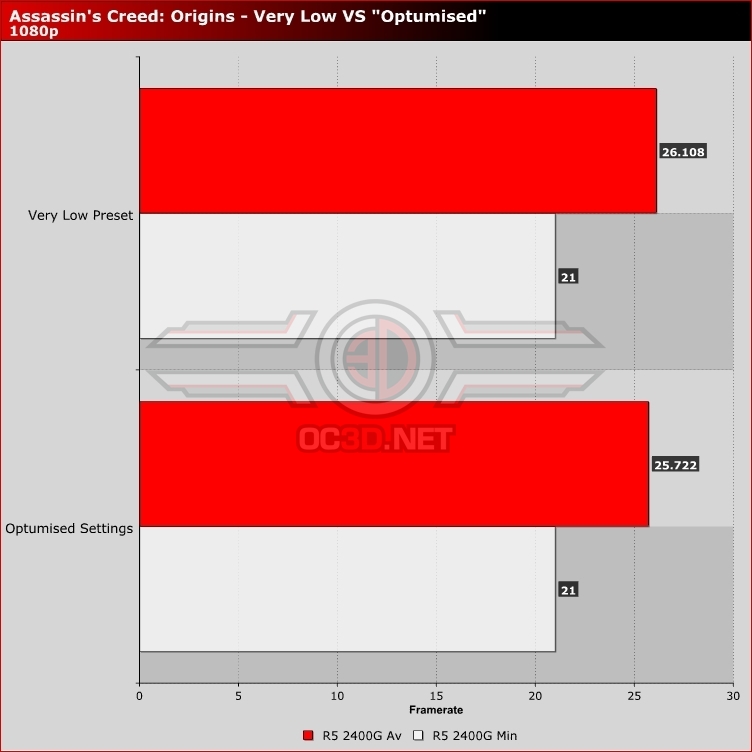 Below are two sliders which compare our optimised settings and the game's default Very Low preset, where we can see a huge increase in detail, mostly due to higher texture resolutions. The settings we chose placed VRAM and system memory usage at around 8GB combined, making the game playable with two 4GB sticks of DDR4 memory.

Both the game's terrain and character details see a significant graphical improvement, making the game a lot more visually appealing while remaining easy to run on such low-end hardware. 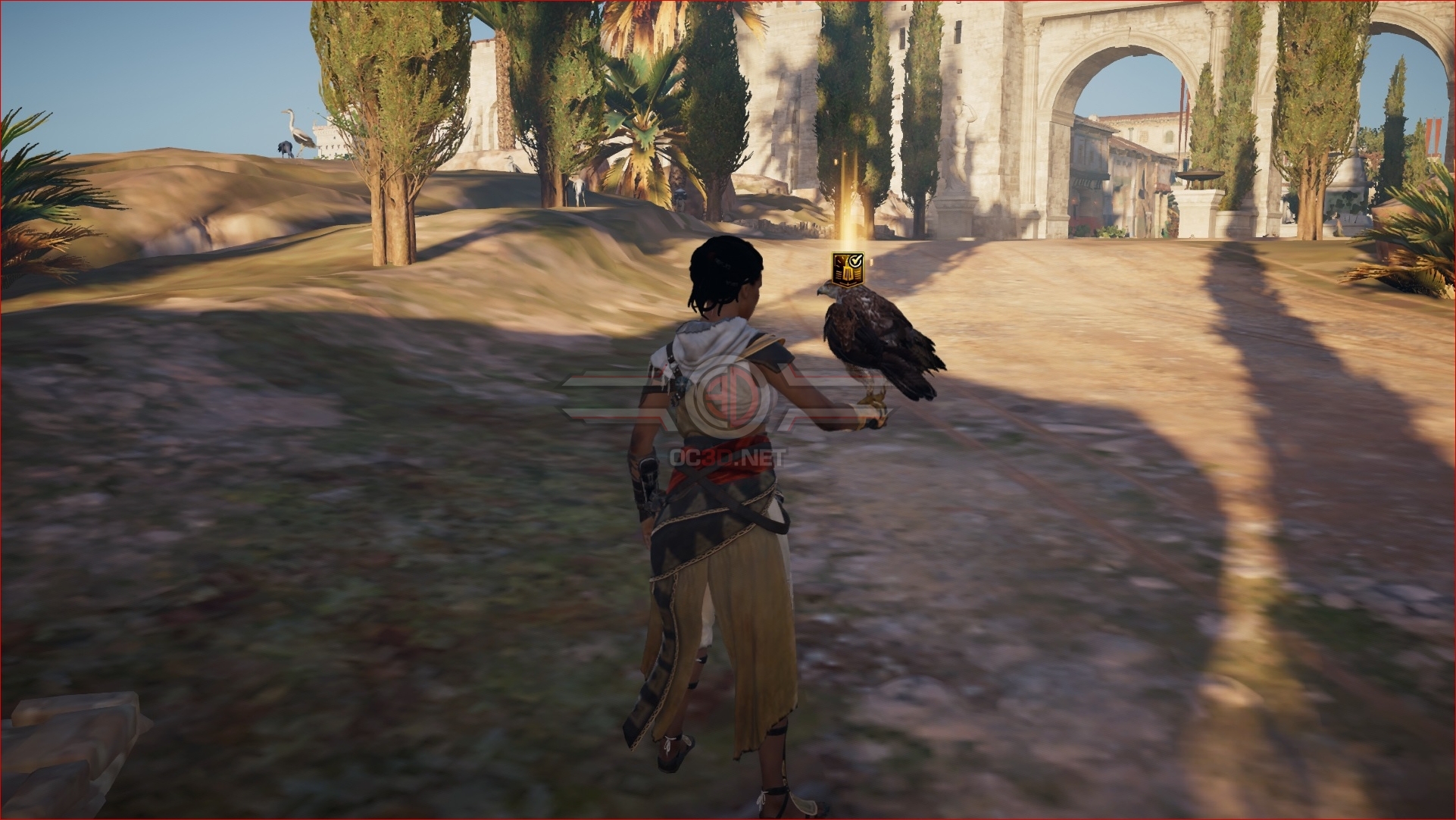 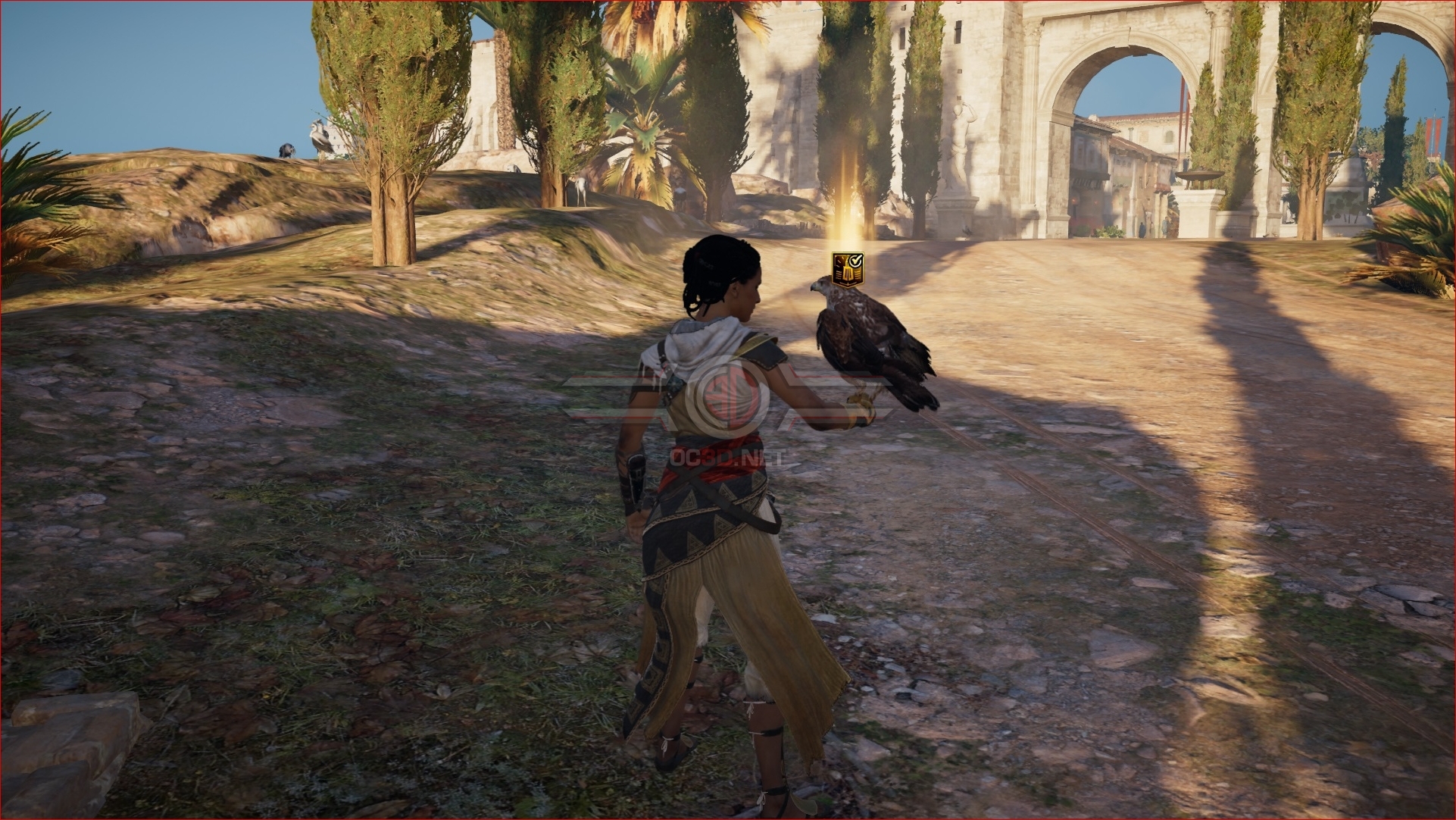 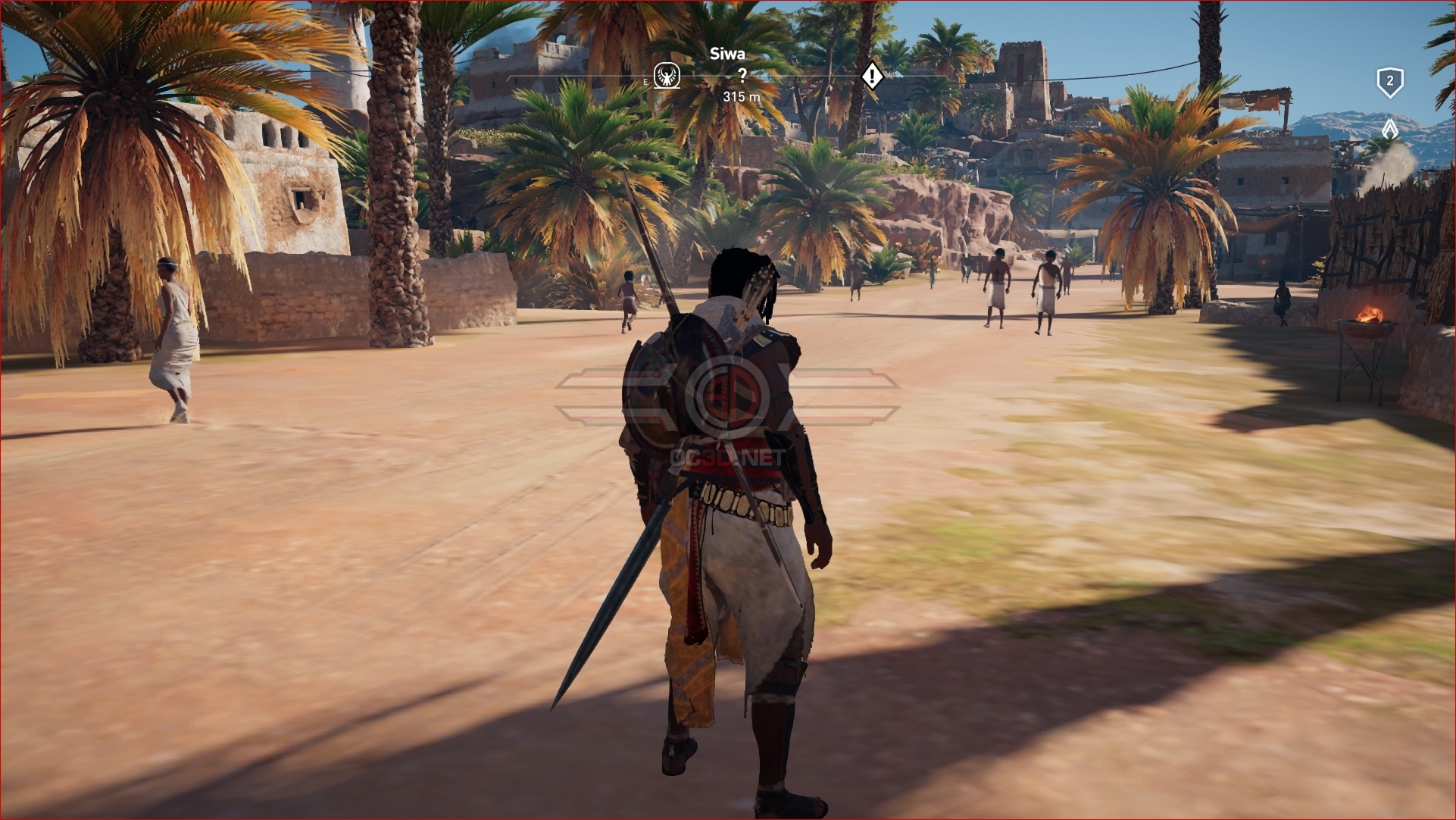 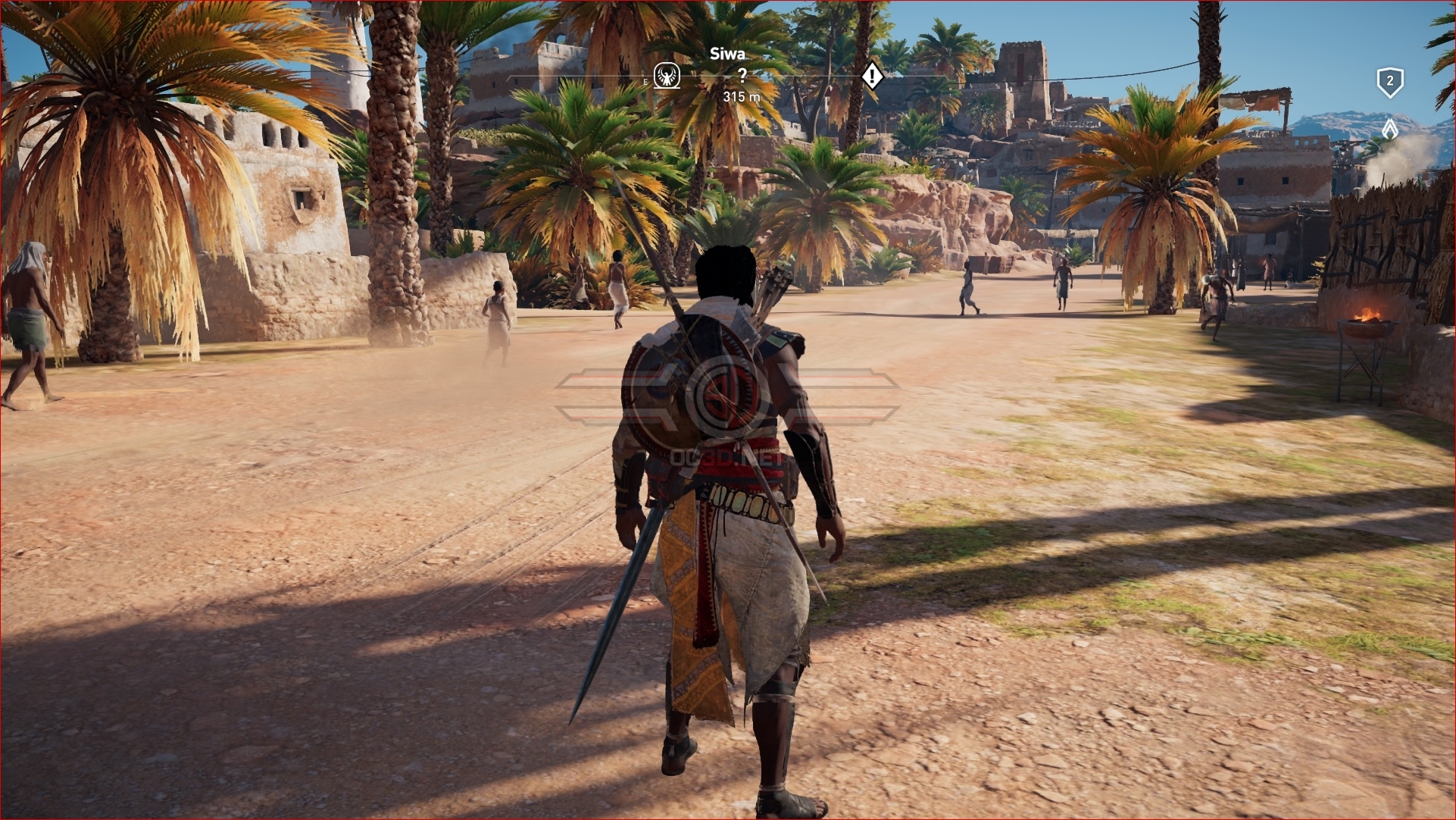 We can see below that 1080p gameplay is out of the question, with 900p having drops below 30FPS on both APUs. In most of the game, the Ryzen 5 2400G can maintain a constant 30+ at these settings, though stress areas like Alexandria can prove a little too much.

At 720p the Ryzen 3 2200G can drop below 30FPS, though the high CPU usage that we see in this game leads us to believe that CPU load could be an issue. This CPU aspect is something that we will look at in the future when we overclock these two APUs.

With the Xbox One version of this title aiming for 900p with dynamic resolution scaling, it is easy to see why these APUs find trouble here, especially when given the fact that the game already doesn't run that well on AMD GPUs. A lot of sacrifices are required to get the game running smoothly, so much so that we recommend capping the game at 30 for more consistent frametimes. 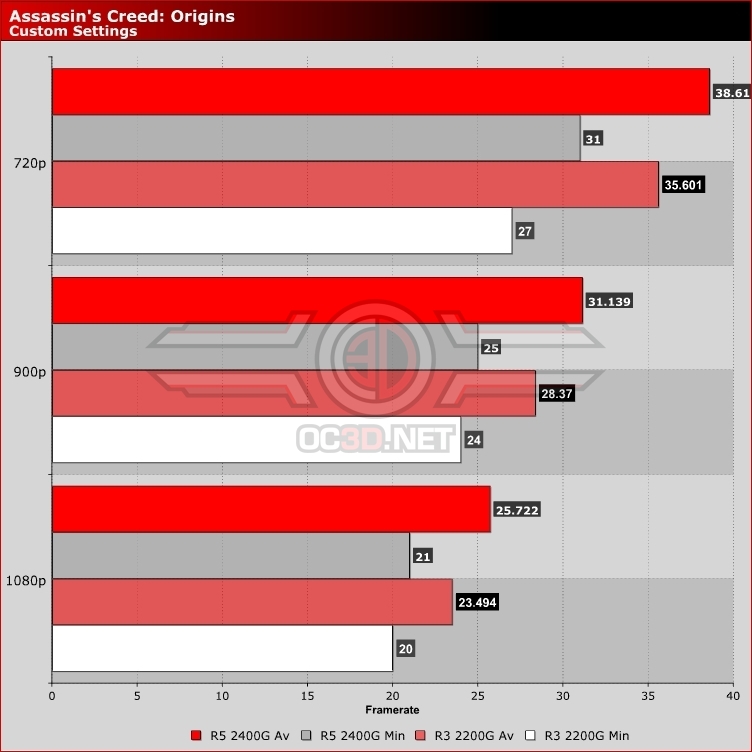 Below are the custom settings which we used in Assassin's Creed Origins, using higher resolution textures than the game's low settings to provide better visuals with a minimal performance impact. 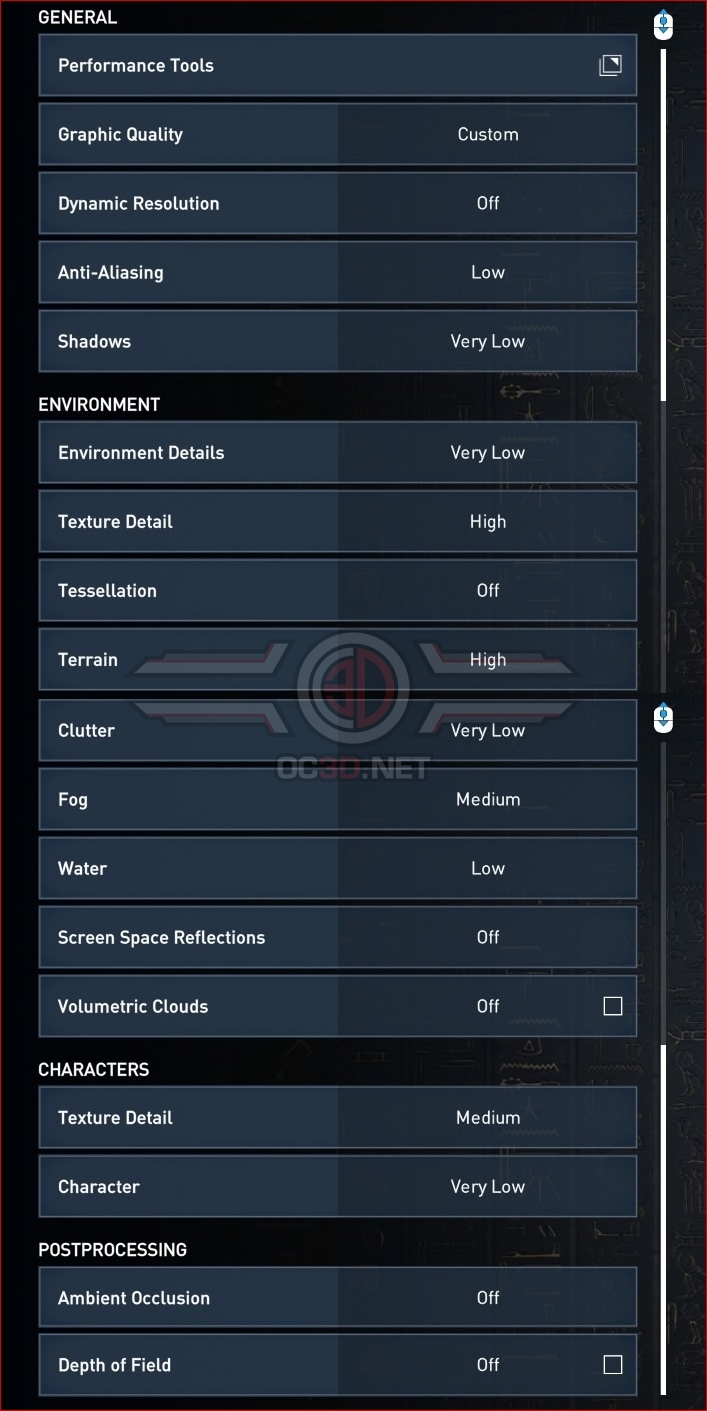