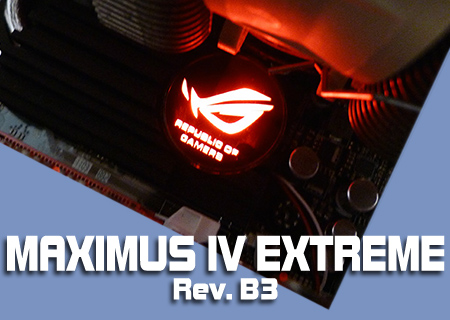 When we first reviewed the Maximus IV Extreme it was good, but not great. The performance in particular was very ho-hum when compared to its ROG stable-mates.

The B3 revision has fixed the only real issue with the P67 chipset, that of the data corruption. But the extra time involved has allowed ASUS to come keep tinkering away at their BIOS to bring the Maximus up to par with the lofty Republic of Gamer branding.

Clearly there can be no doubt that this rocks very hard indeed now. 5 GHz from a i5-2500K is very good, especially at 1.48v. We always make sure our overclocks for testing are ones you could live with all the time, but if you're somebody who lives for the CPUz and blast the consequences there certainly is plenty of voltage headroom to go beyond should you choose.

As it was we couldn't quite get PC Mark Vantage to complete consistently but a tiny reduction down to 4.8 GHz gave us a .08v reduction and the heat and lifespan benefits thereof. Most importantly it didn't really affect the performance as the Maximus IV was right up there throughout all of our testing. Considering it's primarily going against a hyper-threaded Core i7-2600K that's nothing to be sniffed at. Often we've found that you can reach a plateau with an overclock after which the speed stays high but the results fall off a cliff. Akin to a BHP graph. The revs continue to rise but the power drops off.

Not so with the Maximus IV Extreme B3. A lot of performance to go with its lengthy title.

It's very much a sigh of relief around the OC3D offices as a motherboard that comes in the ROG red and black automatically brings with it certain expectations. These are finally fulfilled. Despite the near £300 price-tag the Maximus IV Extreme has every bell and whistle you could desire, and in B3 spec has the performance to match those gorgeous looks.

A worthy winner of the OC3D Gold Award.

Thanks to ASUS for supplying the Maximus IV Extreme for review. Discuss in our forums.

hdaviator
Out of curiosity, is there a purpose for benchmarking video performance? Will there ever be a difference using different motherboards using the same clocks and hardware? Just curious.Quote

SieB
Good motherboard, i'm impressed. 5ghz @ 1.48v stable is good and i'm betting you could push it to 5.5ghz easy.

I'm looking forward to the Big Bang Marshall review now to see who comes out on top, the Maximus or the BBM.

how does it stack up against the ud7 and other higher end boards? only i thought the gd65 was a bit of a let down when you tested it

VonBlade
The main reason to benchmark video performance is just in case there is some bizarre problem with the PCI-e lanes. Now and again companies add a NF200 or similar to their board, so we run the test just to make sure all is well. It also makes sure that the power-phases are fine and there aren't any bottlenecks anywhere. Plus everyone wants to know the 3D Mark scores, even if they never change.

How does it compare to the BBM? *whistles innocently*

As for the UD7, there isn't much in it tbh. But we could either have graphs that take a week to scroll through, or let you do a tiny bit of legwork. Tabbed browsing has it's benefits

My name is Maximus IV Extreme, Motherboard to an over-clocked processor, foundation to a speedy system, and I will have 5GHz with this attempt or the next.

Bryan dude, your reviews crack me up