Don't worry, we're going to build this so you will only get these shots as a chance to see the Maximus XIII Extreme Glacial naked and unadorned. It does make us chuckle that ASUS have chosen Glacial for this though. Beyond ice related meanings it also means unfriendly and slow. Fingers crossed the M13EG is neither of those things. 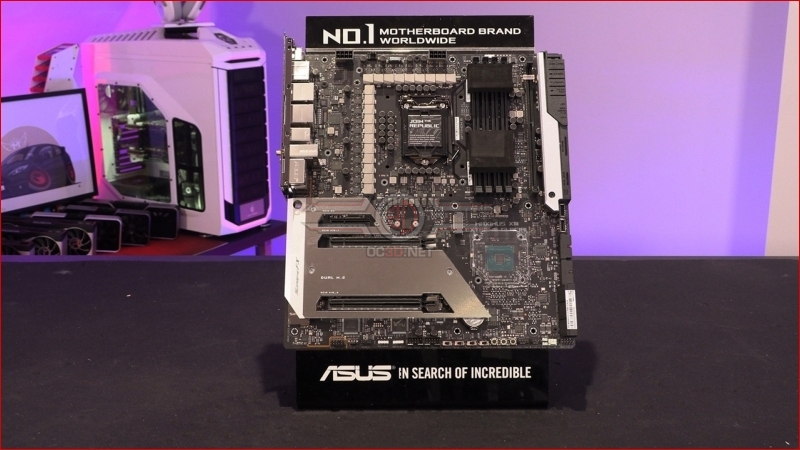 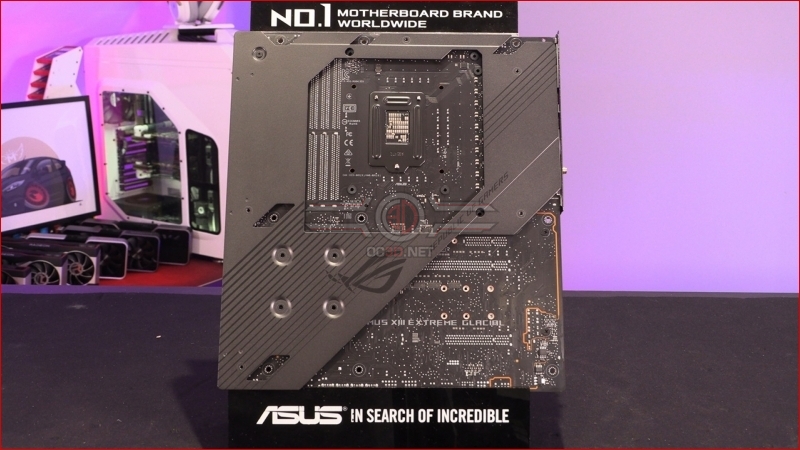 As you would expect from a model at the Extreme end of the Republic of Gamers lineup, the Glacial has an 18 phase - 9 teamed - 100A power section and two 8pin 12V CPU power inputs. There are two more phases (also 100A) handing the System Agent. With the larger PCB format there is plenty of room to arrange things, including the 10K Black Capacitors. 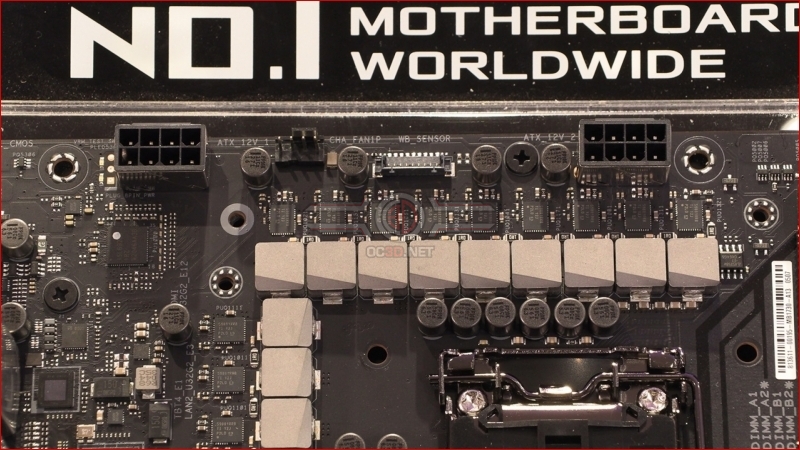 ASUS have adopted the horizontal cable mounting system we've both seen and loved on other motherboards. It just makes everything significantly easier to manage and tidy. Front top to bottom we have a radiator fan header - utilising the ASUS Hydranode technology which allows you to control 3 fans independently from the single header - a water punp header, and the familiar RGB LED strip headers in both vanilla and addressable types.

Moving down we find the 24 pin ATX power input handily placed next to an additional 6 pin PCI Express power header for those of you who want the maximum possible power input. 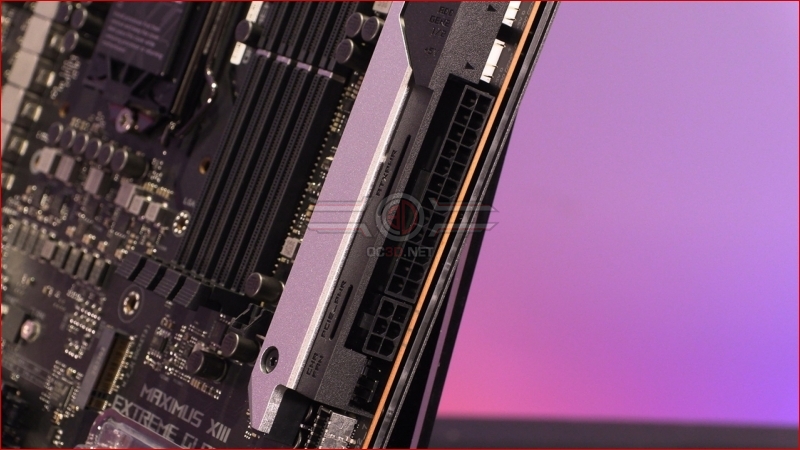 At the bottom right hand corner is a plethora of connectivity options. There is a fan header right at the top of this shot, with two front panel USB Type-C headers just above a pair of USB Type-A ones. Excellent for those who have cutting edge cases into which they can build their system. Lastly the familiar SATA III ports. 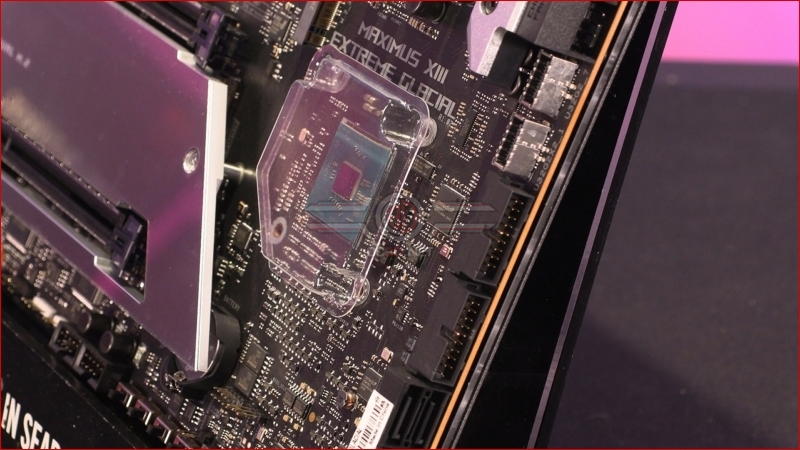 You get a good sense of the serious nature of the Maximus XIII Extreme Glacial from the bottom right hand corner. Usually something that just contains front panel connections and maybe a fan header, the M13 has water flow monitoring points - albeit with one of them not exactly mounted horizontally - next to another set of radiator and waterpump headers. These sit alongside the onboard switches for helping you overcome some overly hopeful overclocking settings, and DIP switches for LN2 modes as well as the V_Latch, which monitors voltage ripple to really help you accurately dial in your VCORE value. 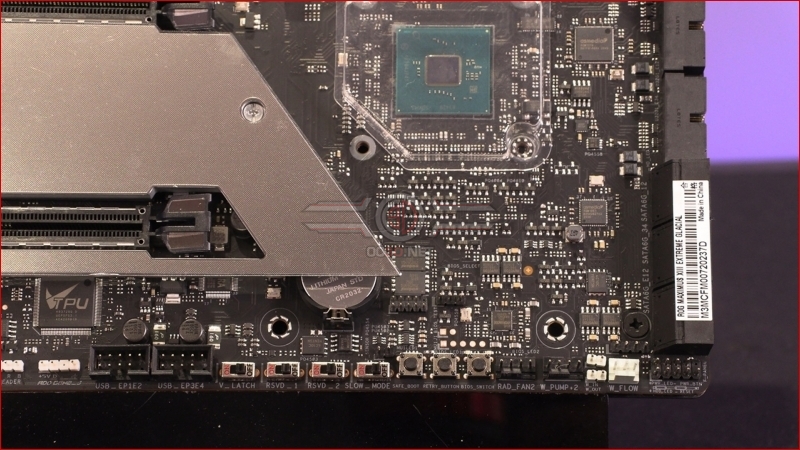 Lastly we continue from the switches to two USB 2.0 headers, AURA RGB LED strip headers, an LN2 mode jumper and the front panel audio for the ASUS SupremeFX technology. 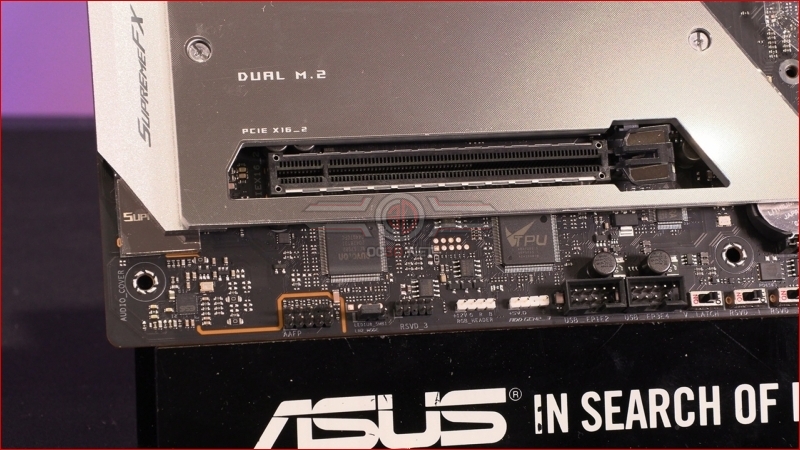 Around the back we have another example of the famous OC3D rule of thumb that you can tell a motherboards quality and price tag largely from just looking at the IO section. As you would expect the Maximus XIII Extreme has a full compliment of Thunderbolt 4 headers, Superspeed 10G USB ports, both 2.5G and 10G ethernet connections, and the Intel WiFi 6E for those of you who prefer to be cable free. 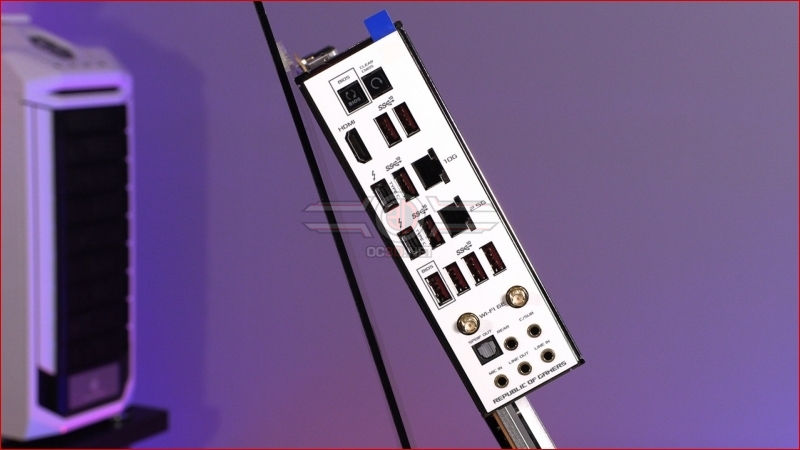 Warchild
When is the NDA lifted for this review?Quote
Reply