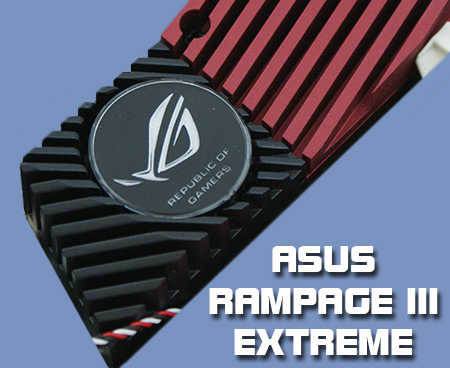 This is definitely a feature packed board. Often the difference between medium boards and high-end ones is the bells and whistles, especially with the X58 chipset being so great.

The mother board is a work of art. Following the standard red and black ASUS ROG design the heatsinks certainly are incredible. When we previewed the photos we wondered if the would be a Marmite thing, but in the flesh they are gorgeous. I love them.

The Mosfet cooling in particular is akin to any great architectural work and looks the absolute business. The area surrounding the CPU socket even has the caps in a nice triangular pattern. Another thing worth mentioning is that their are holes for both 1366 coolers and 775 coolers. This might not mean much to your average user besides the ability to bring your old cooler along when you upgrade, but for the extreme overclockers who have a LN2 pot custom designed, to be able to use that instead of getting a new one fabricated is a boon. 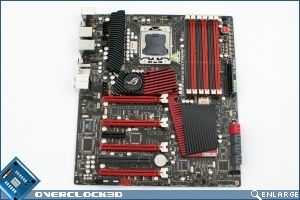 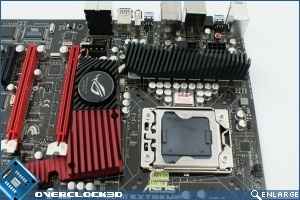 The 24-pin ATX power is situated nicely. Just below it is a bank of LEDs giving an at-a-glance report if the motherboard fails during POST as exactly why. Next to that are the power buttons and the BIOS related "Go" button that instantly loads a certain setting. We will be looking at ProbeIt in a moment.

The rear IO panel has all the things you'd expect to see on a high-end motherboard such as the Rampage III Extreme. PS2, CMOS reset, USB 2 ports, USB3 ports, LAN, Firewire, eSATA, Audio and the ROG Connect. 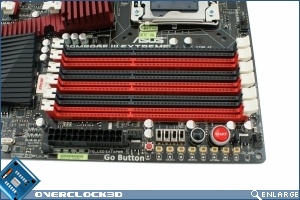 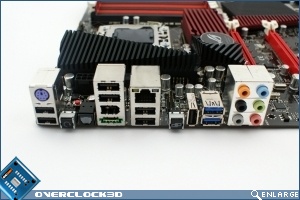 Moving round to the front we find 9 SATA ports. 6 horizontal SATA2 ports running at 3Gbps, one vertical SATA2 3Gbps and the two red SATA6 6Gbps ports. It's somewhat surprising on a premium motherboard such as this to find only two SATA6 ports, especially as it's not something you'll be upgrading every few months.

On the right is the NEC chip that controls the USB3 ports, and one of the two Molex sockets for extra power should you populate all the PCIE slots. 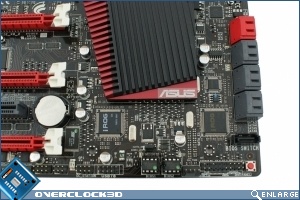 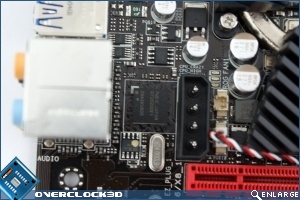 Among the audio and SPDIF headers below the PCI-E slots we find the second EZ-PLUG Molex for an extra bit of power should you require it. This is also in a much better position for cable routing than the one above, as it is horizontally mounted right at the edge of the board.

A little further to the right we find a header for the OC Station. When that was first released we all wondered if it was a piece of technology that would last the distance, or merely a gimmick. ASUS' constant support for it is great to see and really helps it show its worth. If nothing else, between the BIOS, OC Station and ROG Connect you're not short of ways of eeking the most out of the Rampage III Extreme. 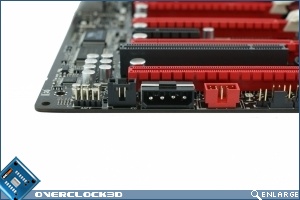 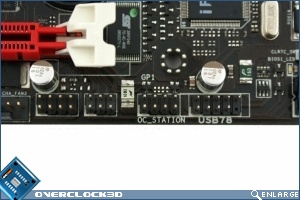 Here are a couple of fantastic things. Firstly the ProbeIt which allows you to accurately check the current voltages using a multimeter. No longer do you need to faff about trying to find the exact bit of solder to probe. Above those are four dip switches. These are for turning on and off the PCI-E lanes. I'm sure you've all experienced a SLI or similar water-cooled setup and then one of your cards dies. Rather than go through the hassle of draining your loop and fiddling about trying to diagnose which one, now you can merely flick a dip switch and quickly pinpoint the faulty card without having to spend a weekend draining and filling your loop.

Speaking of PCI-E expansion ports, they are all very nicely spaced out and it's good to see the old PCI-E x1 that used to be at the top of every expansion port layout has been eliminated. The more airflow the better and as PCI-E x1 never took off it's nice to see it has gone. 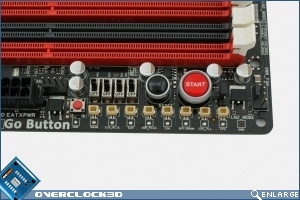 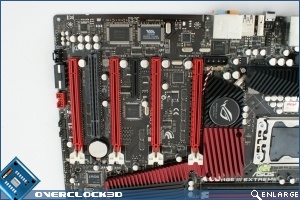 Time to see the BIOS.