The Maximus XII Extreme Up Close

Finally we reach the Maximus XII Extreme itself. One thing that is immediately apparent is how often we see the cover on the PCI Express half of the motherboard. Yes we know that the chipset is also down here, but we always think of the top half as CPU and RAM, and the bottom as GPU and storage. Thank the original P67 TUF for this. 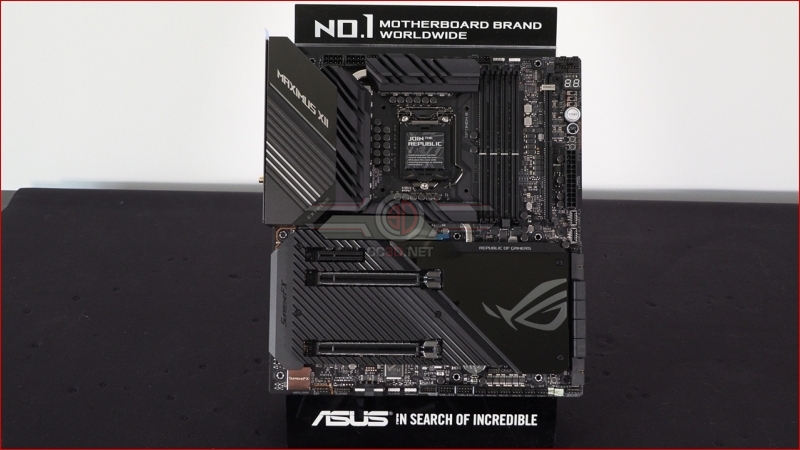 Around the back there is a large cover to help smooth the heat across the widest possible area, whilst ASUS have also left a massive cut out for your CPU coolers. There are few things worse than companies going tight on the room you have to fit your cooler backplate into. 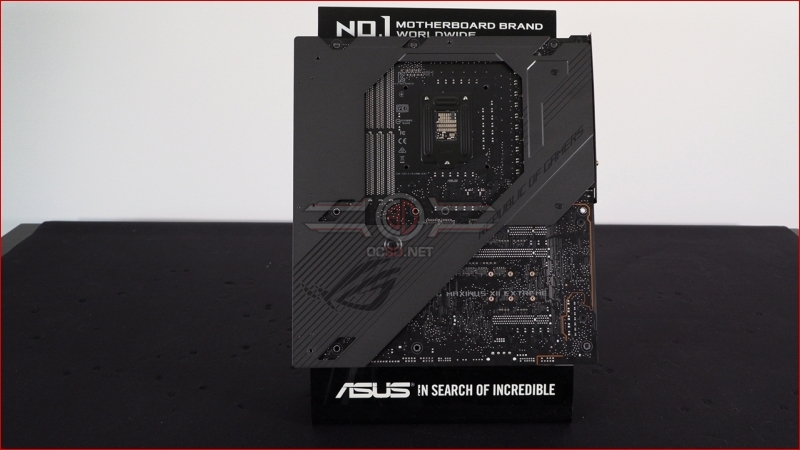 We'll cover the intricacies in more detail in a moment, but already certain things are obvious in the following two overview shots. You can see the black CAPs that form part of the incredible amount of power the power stages are capable of delivering. You can also see the thickness of the two heatsinks and how they are tied together with a heatpipe, which travels down from the bottom-most heatsink in this photograph... 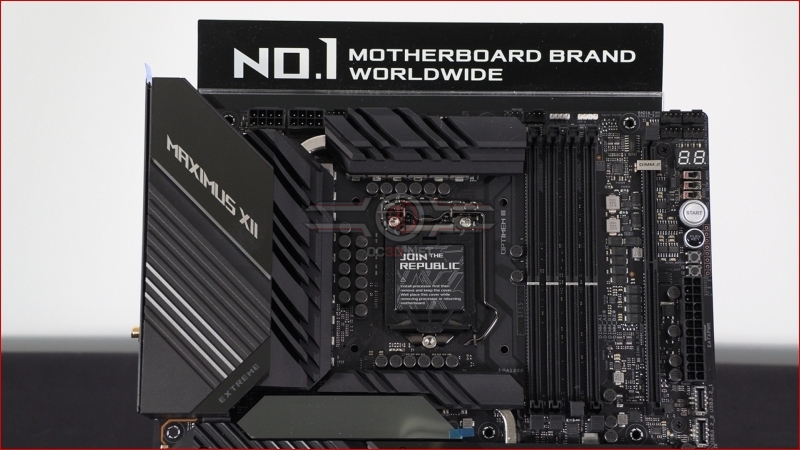 .. to the CPU heatsink here. Tying the whole motherboard cooling together into a single element, helping to spread the heat load across the widest possible area. Good intake cooling at the bottom of your chassis will keep the temperatures of the VRMs down. Nice. Let's get into a little more detail though. 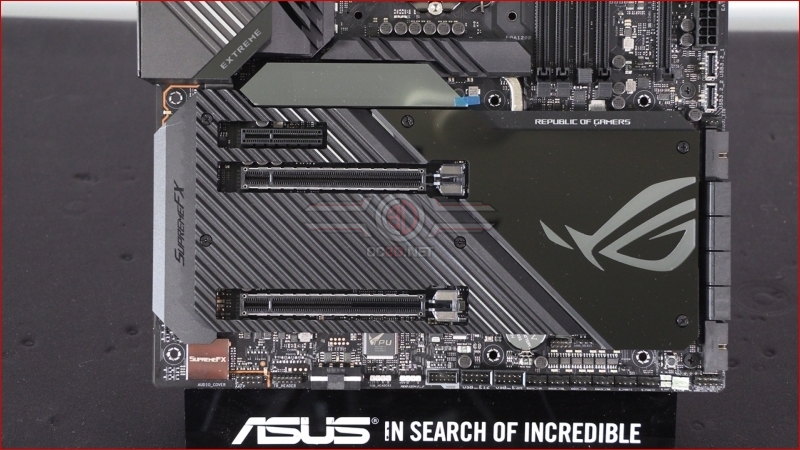 First up the two 12V CPU power inputs, both 8 pin, sit next to one of the many fan headers we'll experience on this motherboard. We've always found this placement of the CPU power inputs to be fiddly as all heck when building our systems, particular in these modern times with roof-mounted radiators on our AIOs. There isn't a better solution though. 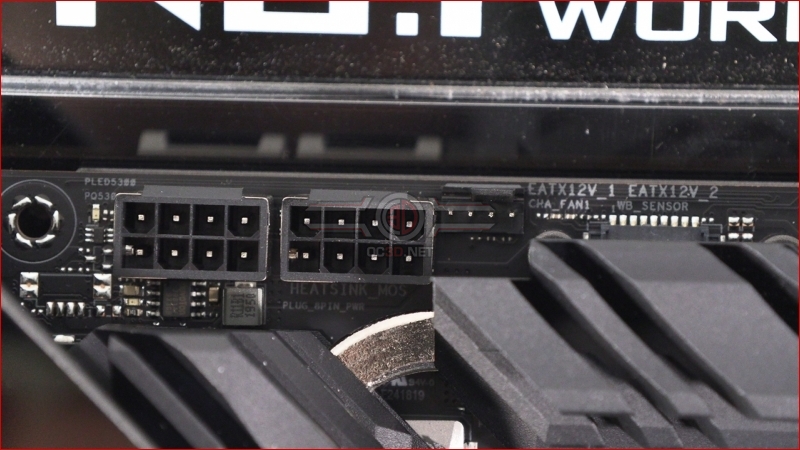 Moving along clockwise we find the CPU fans sitting next to the RGB and ADD headers. The eagle eyed amongst you will notice that this is an updated Addressible header. What's changed? We don't know. We're slightly concerned by the qualifying statement in the ASUS notes;

"Please note that the pinout designation for the addressable headers is +5V, data, and ground, so it is incompatible with standard RGB gear."

But hopefully that doesn't mean a proprietary set of gear like the NZXT wiring forces us to use. 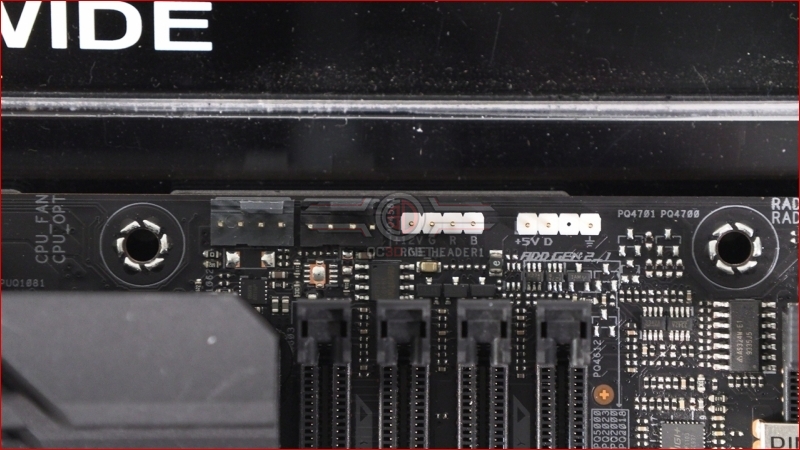 As we continue our trip around the Maximus XII Extreme we next come across the onboard controls, sitting next to the DIMM slots. Memory which can now be pushed up to 4700MHz. Given how much faster manual overclocking can push your DDR4, having 4700MHz out of the box is quite eye-opening. Moving on we have the DIMM.2 slot for the module we looked at earlier, the ASUS QLED 7 segment display for all your "what the hell is a B6 error?!" needs, as well as the dip switching and retry buttons that let the overclockers of both mild and extreme types find an overclock that will best their personal record. 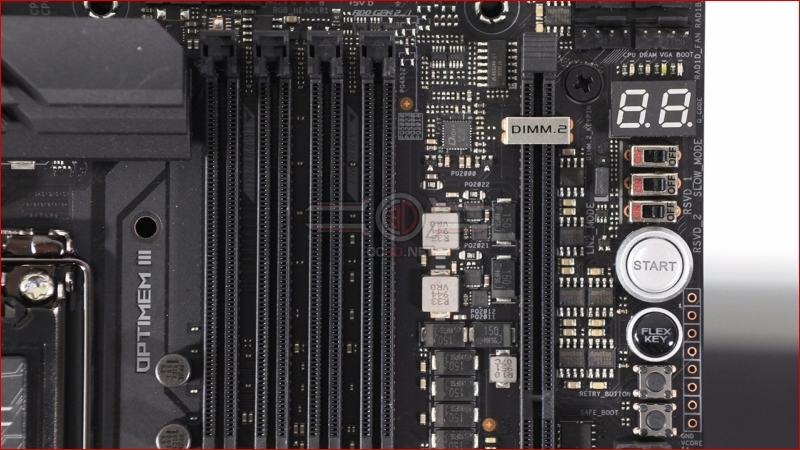