The third of today's B450 reviews is the ASUS ROG Strix B450-F Gaming, a motherboard which combines the cost effectiveness of the AMD B450 chipset with the features that modern gamers have come to expect, all wrapped up in a full ATX package.

So far we have seen that the B450 Prime Plus was a little inconsistent and lacked overclocking options, the ITX Strix was a great performer that punched far above its weight but came with the obvious compromises that you get from the smaller form factor. The $64000 question then is whether the F version of the B450 Strix can combine the performance of the ITX Strix with the size of the Prime Plus and add its own trimmings to make for a motherboard which is as desirable as any of the high end X470 motherboards.

Without further ado, let us discover if the features and performance are enough to make the Strix F find itself on the shortlist of any prospective 2nd Generation Zen purchaser.

Certainly if you've been following along with our triumvirate of B450 reviews it is clear that the Strix B450-F Gaming looks the part and has a lot more of the modern features that the average user will expect. RGB lighting on both the integrated IO shield and Chipset heatsink, two AURA SYNC RGB LED strip headers, dual M.2 sockets supporting 2242 to 22110 drives with both supporting NVMe and the primary slot also enabling SATA M.2 support. Combining all this on a PCB that looks far more like the other models in the Strix range and, on paper at least, the F is a very attractive prospect. 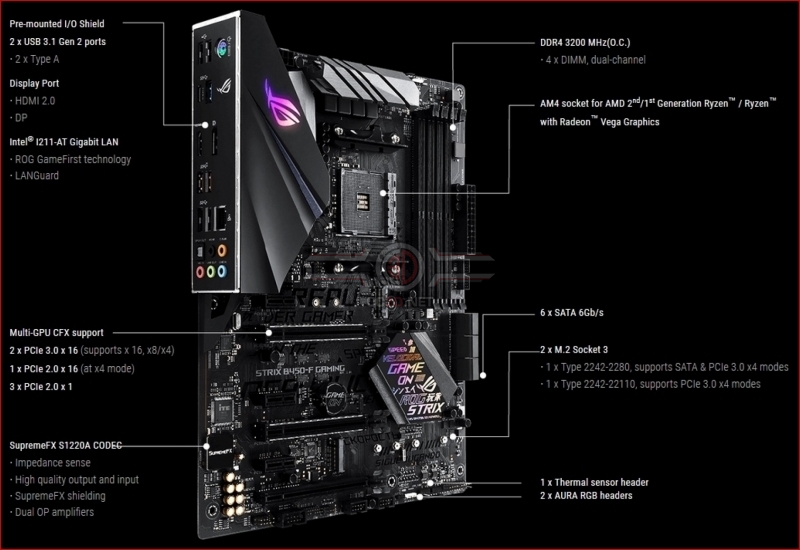 ImprovizoR
You left it kinda vague. Is it good or not?


I might just get this one if I decide to build a Ryzen system this year.Quote

Peace Đ
Quite amazed by the impact a motherboard can make in terms of performance... 30 FPS increase in Gears CPU and 20 in Gears GPU if you use the Crosshair mobo...

AlienALX
Glad they did not hike the price too much. ÂŁ10 for an IO cover with a lit logo on is more than worth the cost IMO.

Nice board, shame about all of the ghey writing. But yeah, given the B-350 Strix was probably the best selling mobo on AM4 (at least from what I saw around the interwebs) then this board had pretty large boots to fill.

The 350, like this, was so good it competed with lower end 370 boards, yet cost ÂŁ50 less at least *and* looked better to boot.Quote

RobM
Quote:
If you are having difficulties it would be better to open a new topic and provide more info such as you systems specs and any troubleshooting already done.Quote
Reply