When we first looked at the B550 motherboards we have to confess we were surprised in a two-fold nature.

Firstly we couldn't believe how close to the X570 motherboards the latest AMD chipset was in performance terms. Naturally you'll always be compromising a certain level of connectivity, but in raw "getting things done" terms the B550 was right up there. The other thing that caused us to raise an eyebrow was the pricing. Since the X570 had been launched the prices do what prices do, namely reduce. Whilst some of the B550 models were at or even beyond the uppermost end of what we expected. This meant that there was far more overlap between a middle range X570 and a high end B550. It made the top range B550 products a tough sell.

Anyway, whilst the B550 chipset loses some features when compared to its bigger chipset stablemate, so an ITX motherboard always has to lose some features to fit onto the reduced footprint. Combine those two elements together and you get today's review, the ASUS Strix B550-I Gaming. Squeezing all the B550 elements onto a tiny PCB, does it live up to the lofty expectations of a ROG product or does the doubling up of the need to cut things down leave us with a product that compromises too much?

The layout of the Strix B550 ITX will be familiar to anyone who has spent any time at all investigating modern ITX motherboards or even just looked at the B550 reviews we did. With the necessity of an M.2 slot the layout of ITX PCBs has almost reached a manufacturer-wide conclusion on the best way to lay them out. This involves putting all the power section on the left side of the CPU so it can be covered by the IO shield/heatsink combination, with the M.2 slot at the bottom of the board having a heatsink included, whilst SATA storage is handled using vertical ports. Fans and lighting are usually to be found at the top side, and the Strix conforms to this template almost exactly. It does have a couple of elements unique to it though, so let's move on to it in the flesh so we can show them off. 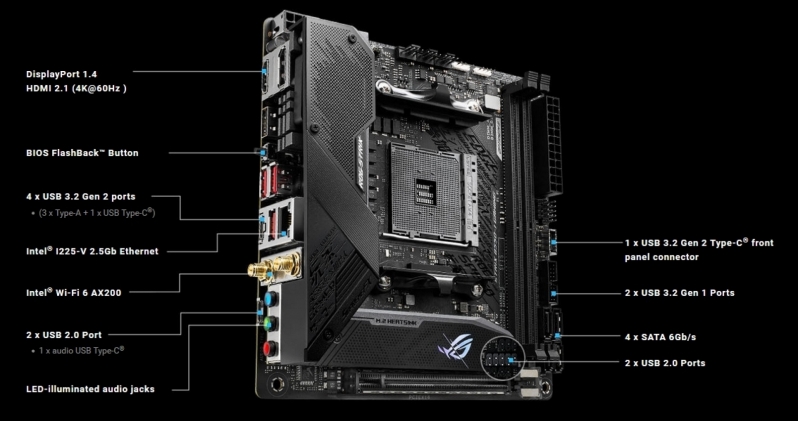