The Z590 motherboards are soon going to be launched, which means the office is slowly filling up with motherboard boxes. If you're anything like us then it's fun to see a full suite of performance tests but it's just as much fun to scratch your curiosity itch and get a chance to look over it.

That's also a fairly useful thing to do these days with so many motherboards being consistent in their performance the chances are that you're just as likely to buy a motherboard based upon its looks or your brand loyalty as you are any major feature set differences. The ASUS Strix range of mobos have proven to be insane sellers, bridging the price gap between a bottom of the range motherboard and the type - Maximus/Crosshair - that requires you to have a beefy bank balance.

Details about all of the Z590 range are either thin on the ground or covered under NDA, but we know that the main big feature is the introduction of PCI Express 4.0 on to the Intel platform alongside support for the newest 11th Generation CPUs. You know even ASUS are struggling to tell us what is new as one of the features listed below is an "L Shaped heatpipe". So rather than flannel any longer let's grab the box and show off the goodies. 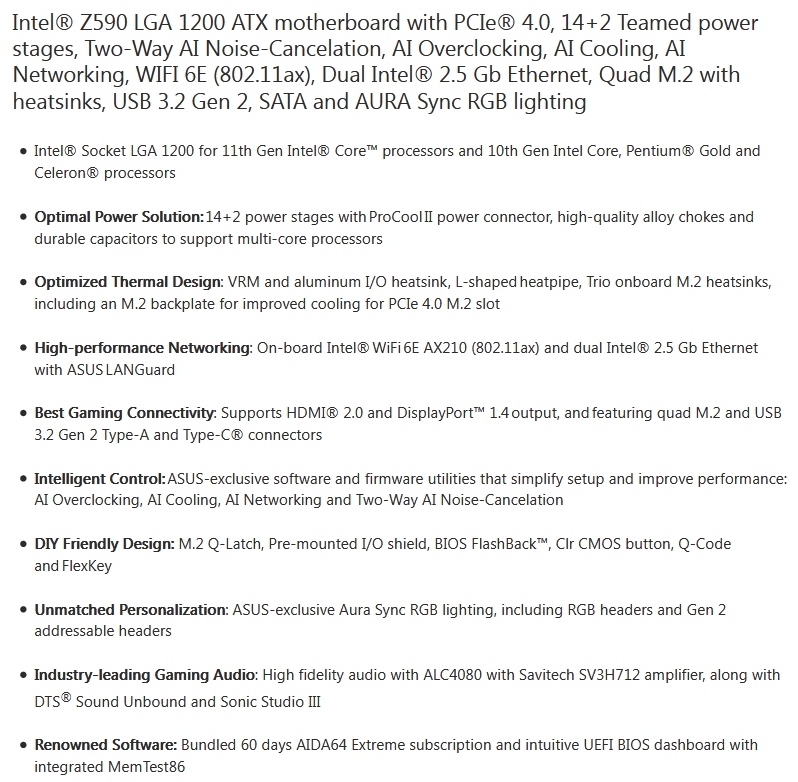 Tom Sunday
I think that the Intel Z590 Maximus XIII Hero with PCIe 4.0, dual Thunderbolt 4, PCIe 4.0, WiFi 6 and a Quad M.2 will be the board to see and to review. Usually ASUS regards the Hero as their top standard and their entire annual board line up is generally judged by the Hero. The Maximus ROG Extreme VIII is said to cost close to $900? This may drive the cost of the Z590 Hero close to $500? For that matter all of the costs for any 11th generation items are plainly now out of sight. Our 'work from home' people (WFH) will not be getting any pay raises in 2021 because HR already reclassified them as casual employees. There goes my upgrading dreams! And soon going from full-time to part-time.Quote

Tom Sunday
Wow...room for (4) M.2 drives. I will probably never have the $$$ to populate such four puppies. Unless the new deal will be that all near or future prosumer systems will all consist of purely NVME storage and us kissing mechanical HDD's goodby forever. I was also wondering how the new Rocket Lake CPU's will run on a Z490 board? Perhaps issues with getting actual mature versions of BIOS for Z490 with Rocket Lake and PCIe 4. But those who would be planning to use a Z590 board with a Comet Lake processor they would not get the benefit of PCI-E 4.0 and no HDMI 2.0.Quote

Dawelio
Quote:
Well considering that you can get an 1TB or even 2TB rather cheap these days, just wait a year or so more and you'll se the current 8TB (!) M.2 NVMe drives on the market being rather cheap as well.

Plus you don't actually need more than 2TB for a few games, if that's all you do. Hence only a single M.2 SSD is enough for most people.Quote
Reply