A lot of the new AMD motherboards are hitting the shelves with their updated X570S chipset branding. When the newest flagship in the ASUS Crosshair range appeared in Crosshair VIII Extreme form we were somewhat taken aback that they had decided to continue using the regular X570 chipset and not follow the rest of the pack even though in reality its mainly just a bios update.

However, when you take a glance through the specifications and feature-heavy abilities of the Crosshair VIII Extreme that decision becomes less perplexing because many of the new X570S elements are taken care of, and many more desirable elements added on top. So dont let the lack of that letter 'S' make you worry that youre missing out.

Back in the early days of OC3D an Extreme designation from the ROG range usually meant it was capable of pushing your processor a little further than anything else you might choose to base your system around. However, with the consistent performance of all motherboards in recent times that extra performance idea is less of an issue, which explains why ASUS have instead gone down the route of giving you more toys to play with than you could ever need. The ASUS X570 Crosshair VIII Extreme is still deserving of that Extreme moniker, just for feature set reasons rather than insane performance once. Not that it's hard up for some performance either.

Let's show you some numbers.

There are many things to enjoy with the X570 Extreme. We think the primary elements are things we've been seeing on the new X570S. Thunderbolt 4 support, WiFi 6E - not yet supported in the UK but we're sure it will be soon enough especially with ASUS routers on the horizon - and if you demand fast hard-cabled networking options the Extreme has two connectors, a 2.5G and a 10G for those of you with monster home network infrastructure. 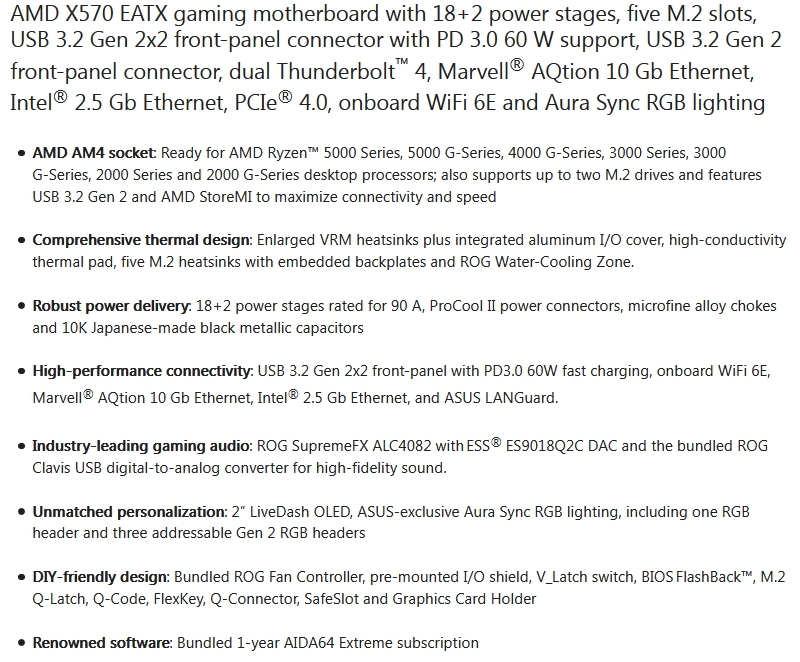 A list of specifications is all well and good, but it means more when we're looking at it in the flesh, so click on dear reader and we'll spend some time going over the fine points of how the Crosshair VIII Extreme betters the Crosshair VIII Hero.