We've barely recovered from the launch of the nVidia RTX range of graphics cards than the new Intel 9th Generation CPUs are due to appear. If you've been following the market for any length of time at all you'll understand that a new CPU always comes with a new chipset to go alongside it, and as the newest Intel CPUs are even beefier than their 8th Generation forebears the Z390 is the very thing.

As you can gather from the fact that the Z390 is similarly labelled to the Z370 that is currently supporting the Coffee Lake CPUs, this is more of an evolution of the already excellent Z370, than a full on rejig. The Z370 motherboards haven't been around all that long and in the time between that launch and this one the market hasn't seen any major new technological additions. The cynical might suggest that the Z370 was only ever intended as a stop gap product, hence its brief moment in the sun. However, the Z370 had a strong enough feature set that the Z390 should be a refinement of the current motherboards and should see a stronger commitment to those features that have proven their worth. That's the best thing about market forces, ideas which prove untenable get left by the wayside whilst those which prove useful are retained.

The primary changes to the Z390 chipset are; the addition of support for 2nd Gen USB 3.1 at a chipset level. We've seen the 10Gbps USB continue the rapid adoption rate that USB has always managed, so much so that most people forget how complicated it used to be to connect any peripheral at all. Secondly Intel have their own WiFi AC dual support. The World is swiftly going wireless, and being able to easily have all our devices centrally connected is a boon. Those of you who prefer the reliability and speed of hard wired networking still have a RJ45 connector. It's nice that Intel aren't going down the Apple "we've removed it, deal with it" idea that has plagued iPhones.

The Maximus XI range has a model to suit all budgets and requirements and the mATX Gene is very much for those of you who have a little less space than others. Whilst once upon a time the smaller motherboards were wheezy things with few features and little performance, usually based upon cut-down chipsets, the Gene is a full-fat Z390 that is only really missing the extra PCI Express slots. Given how few of us run dual GPU systems or have PCI Express x1 add-in cards, this might not be as bad a thing as you'd imagine. Plus it really frees up your creativity when it comes to choosing a chassis. Why go for a plain box when you could fit the Gene into all manner of cases built from anything with the room to hold it?

Because we're previewing these before the release date the usual specification tables that we show you at this point are so covered in identification markers to avoid NDA breaches that they are almost illegible. Rather than leave you groping in the dark we'll show you the back of the box instead and you can peruse it at your leisure. 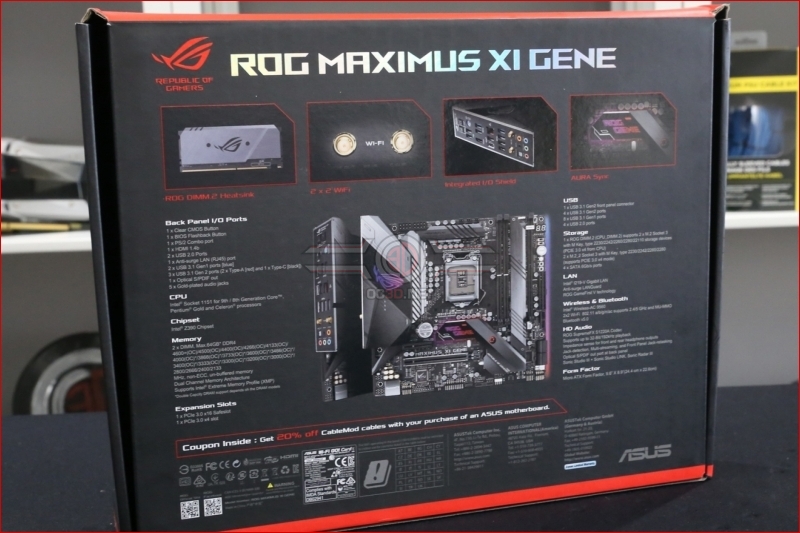 AlienALX
ROG Gene. Sounds like some one who would hang out at the Blue Oyster.*

* Young people may not get that.Quote

AlienALX
Quote:
haha I always remember the tune that plays as they walk in

Then they do it again, hear the song and their faces hahahaha.Quote

Avet
I love small form factor builds. Imagine this puppy in Hex-Gear R40 with some nice tubes, and fancy cables. And i still don't know why mATX hasn't becoming a standard. ITX could be expensive to make, because you are cramming a lot of stuff into small space. mATX is just right. It doesn't have to be this high-end, but decent VRM, 2 RAM sticks, all the connectivity, one PCI-E. Joyous. This is what 90% of the "regular" builds have.

I have a question for you Tom. Do lanes for dimm.2 m.2 drives both come from CPU? It says in the manual that 2 on board come from PCH. That is clear. And when you connect first one on dimm.2 PCI-E is switched to 8x. But nowhere is stated how the second one on dimm.2 is connected. It seems wasteful to have one connected to CPU lanes and other to PCH, and not use 4 perfectly fine CPU lanes. If you can't answer it now because of NDA, can you please check it for main review. Tnx.Quote

You_What?
I guess my Gene VIII just got the boot from home...

Had hoped they would revive the Gene and Impact (guess not so for that little one), look forward to the full review Tom and all.Quote
Reply