It's curious how used we are to seeing a ROG box. Naturally we can only review what we're sent, and ASUS more often than not send us their ROG hardware to review. That doesn't mean they don't have a full range of non-ROG products and the TUF is one such motherboard. The use of the yellow on the box is certainly attention grabbing in a world in which most manufacturers aside from Corsair have given up on that particular hue. 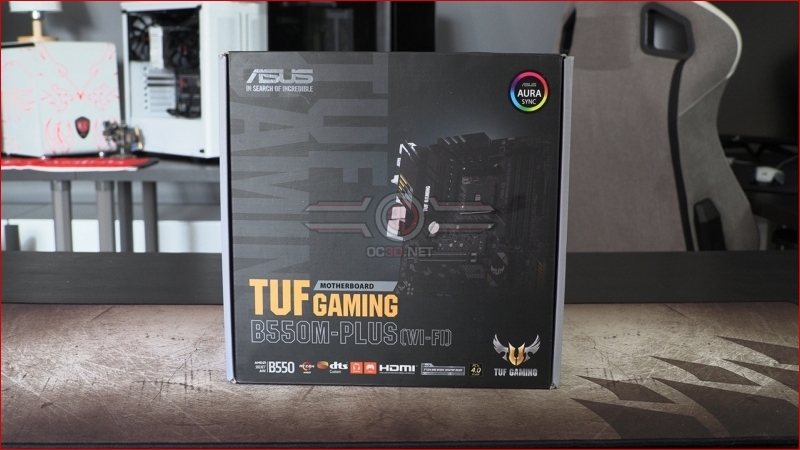 In keeping with the affordable nature of the TUF the accessories list is small, but everything you need. Driver DVD, manual, SATA cables, WiFi antenna, stickers and an IO shield. You forget how every motherboard used to come with an IO shield ready to slice your fingers open, and then ASUS invented the flat back that didn't, and then they improved upon that by building the IO shield into the motherboard itself. Now everyone does it, so finding a shield in the box was a surprise and took us back to the old days. 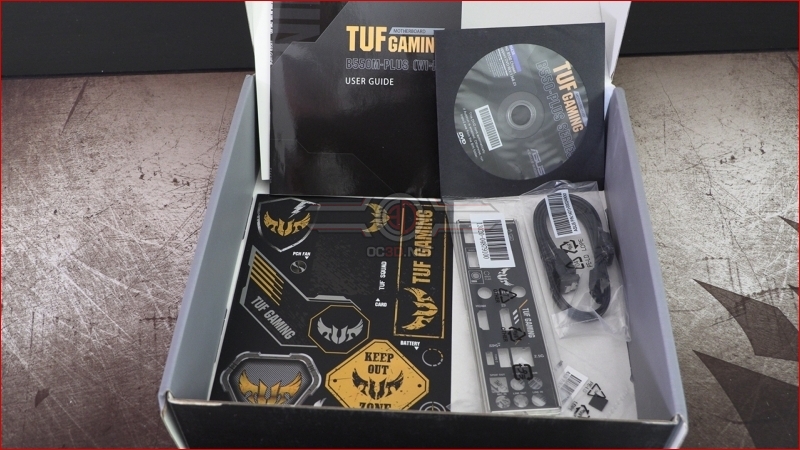 The TUF B550M-Plus certainly is kicking it old school. As well as the separate IO shield mentioned above the DIMM slots are in two separate colour plastics. These days with RGB everywhere most plastics are all black, so the old "here's the slots to use for Dual Channel RAM" colouring harkens back to our early days.We're not massive fans of the heavy striping on the PCB, but like all aesthetics it's a matter of personal preference.

Squeezed between the two big power heatsinks is the single 8pin 12V CPU power input. The rest of the motherboard we'll cover in detail below. 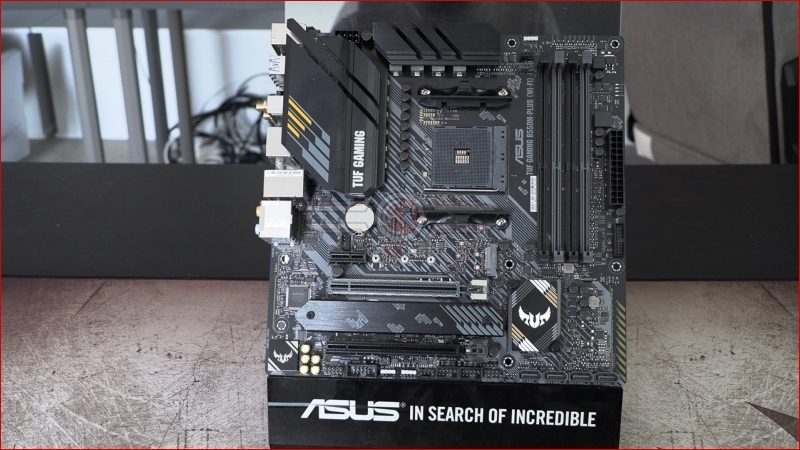 Beginning at the top right, we find two CPU fans for your twin-tower cooler or AIO. Without a 7 segment POST display you'll have to rely upon the little LEDs on the rightmost edge for problem diagnosis, although these days the odds of getting incompatible RAM is so small as to be negligible. 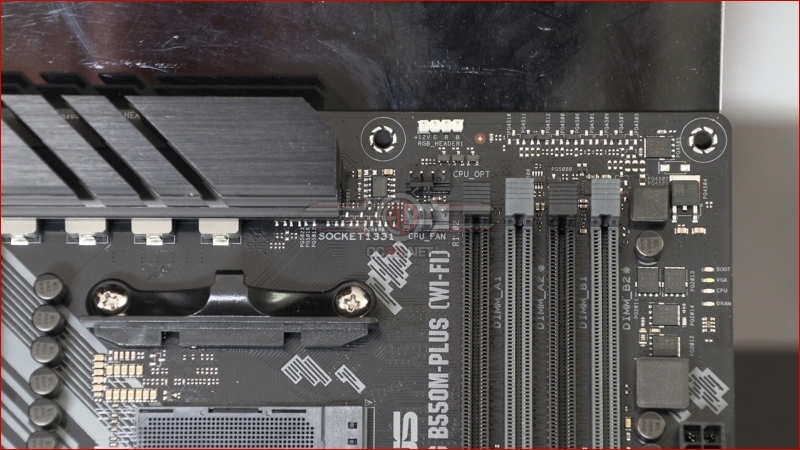 Moving further around you can see the bottom half of the DIMM slots that still use the famous ASUS single latch system for one-handed RAM installation. Just below the 24 pin ATX we have the USB 3.2 Gen1 Type-A front panel USB connector. 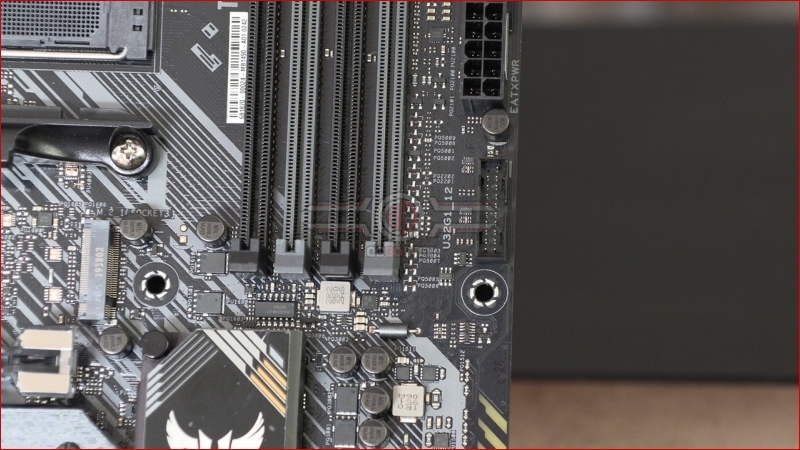 Being an mATX motherboard it isn't a great surprise to see vertical SATA ports. It's also in keeping with the old school aesthetics of the TUF. On that subject the heatsink is both small and sprung mounted, both things that have been some time since we last saw. If you yearn for the motherboards of your youth then this might be the very thing to scratch that particular itch. Next to the SATA ports is the front panel header and then... 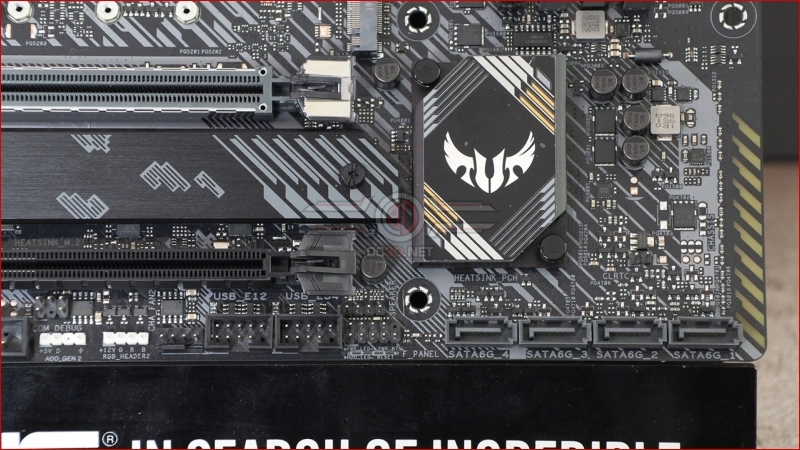 two USB 2.0 connectors. With so many of the RGB controls - be it fans or what-have-you - requiring a USB 2.0 header it's nice to have a pair. Heck my Maximus X only has one. Then we have another fan header sitting alongside the addressable and regular RGB LED strip headers that form part of the AURA lighting, before finishing up with the front panel for the Realtek ALC1200A audio. Between the two PCI Express slots - the uppermost armoured one being PCIe 4.0 whilst the black one is PCIe 3.0 - we have the heatspreader for the PCIe 4.0 M.2 drive that will bring you blistering transfer rates. 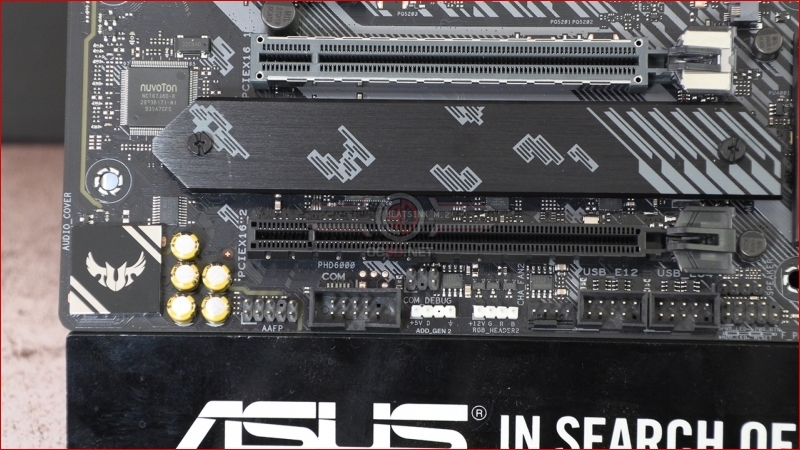 Absolutely none of the literature surrounding the ASUS TUF B550M-Plus explains what ampage lies beneath those heatsinks beyond saying it is "8+2 DrMOS power stages". The black Capacitors hint at its possibility and given how well the B550 motherboards we've reviewed so far have handled our Ryzen 9 3900X we're sure that whatever they are they will be enough. Only one way to find out of course. 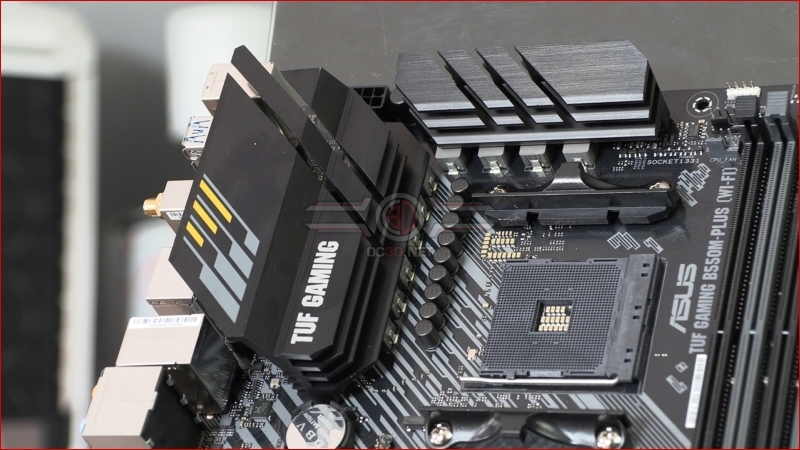 It's not often we can look through the heatsink that keeps the western power regulators cool. Very old school. 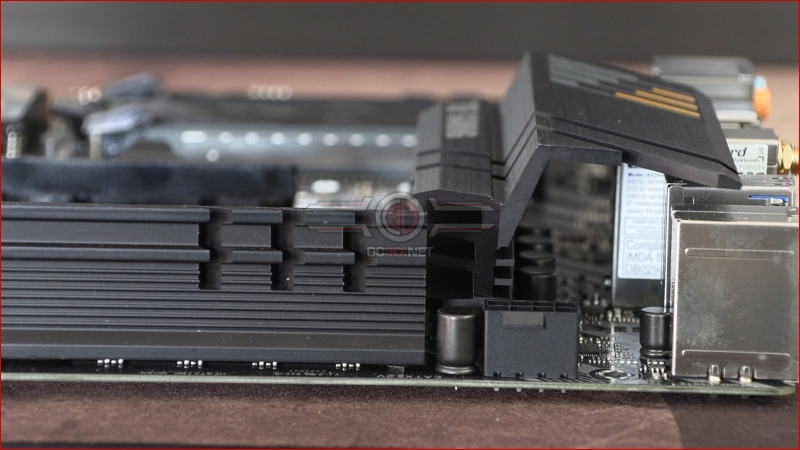 Similarly a trip down memory lane comes from the back panel connectors being in individual stacks. We're sure that's how they still are, but being hidden by large heatsink and IO shield combinations on most motherboards it's been a while since we've seen them naked and unadorned. The TUF B550M-Plus WiFi is equipped with a combined PS/2 port, 2 USB 2.0, 4 USB 3.2 Gen1 Type-A (the blue ones) and a pair of USB 3.2 Gen2 in single Type-A and Type-C format. With a DisplayPort and HDMI in case your CPU has graphics built in, and the RJ45 for the Realtek 2.5G LAN that is such a feature of the B550 range, with WiFi connectors and audio jacks rounding out the selection. 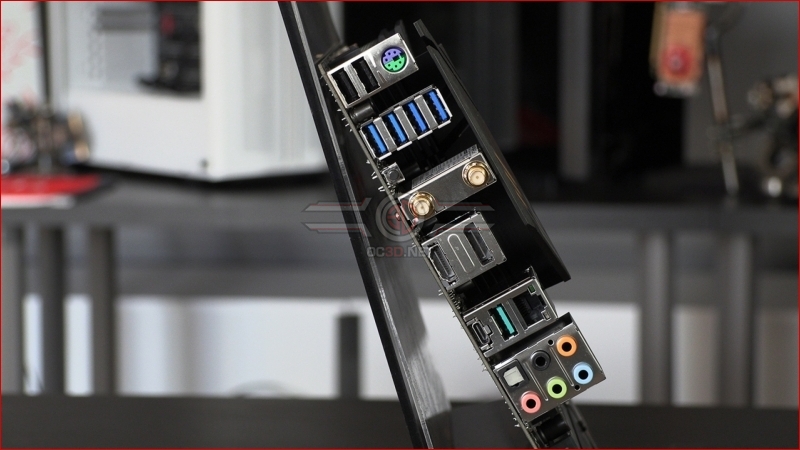 gunnarre
One correction on page 2 (up close): "Between the two PCI Express slots - the uppermost armoured one being PCIe 4.0 whilst the black one is PCIe 3.0 - we have the heatspreader for the PCIe 4.0 M.2 drive that will bring you blistering transfer rates."

Gigabyte's AORUS PCIe 4.0 M.2 SSD also comes with its own heat spreader, which means you'll have spare ones, as Gigabyte's B550 motherboards come with a heat spreader.Quote