The packaging for the TUF Gaming X570 Plus is very different to that which we normally see from ASUS, whether it's their standard models or their ROG range. At least it looks different, which has to be considered a plus when you see as many motherboard boxes as we do. 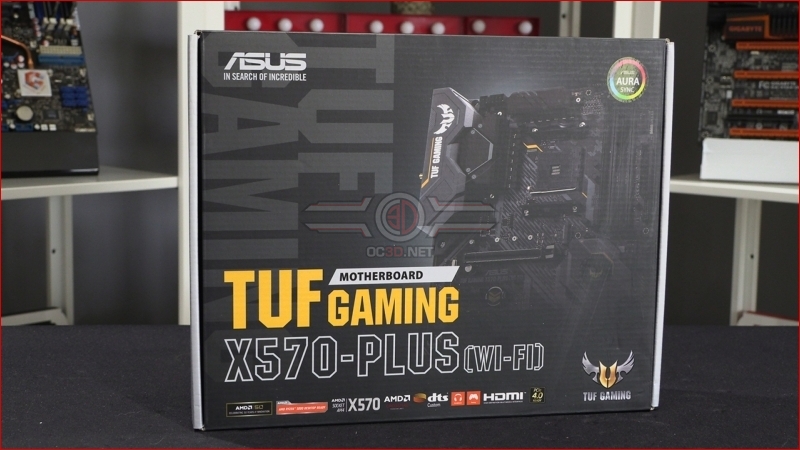 At the top we find the TUF armor protecting the IO section as well as military looking heatsinks on the power phases. Speaking of power the 8+4 CPU power is neatly tucked away in the corner, whilst the CPU socket is surrounded by a neat row of black capacitors. 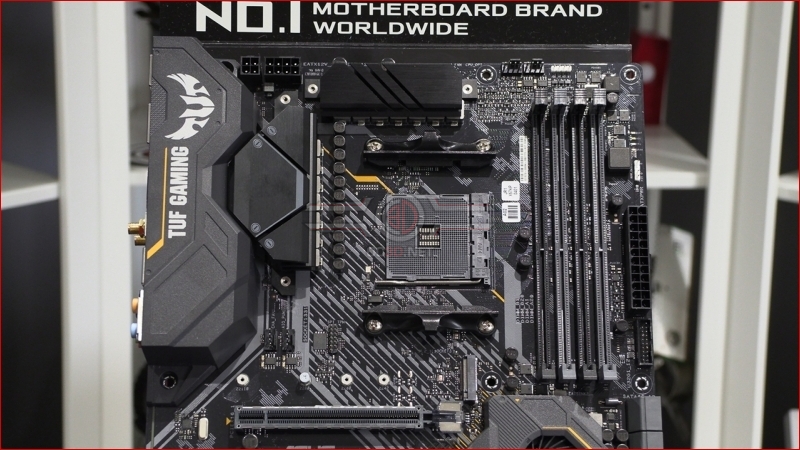 It's slightly odd to have a model in the ASUS TUF range not have the full cover TUF Armor, We're not too sure about the printing on the PCB, but at least if you like the looks of it ASUS have committed to it, keeping the lines across the chipset heatsink and the digipat camo effect on the M.2 heat spreader. 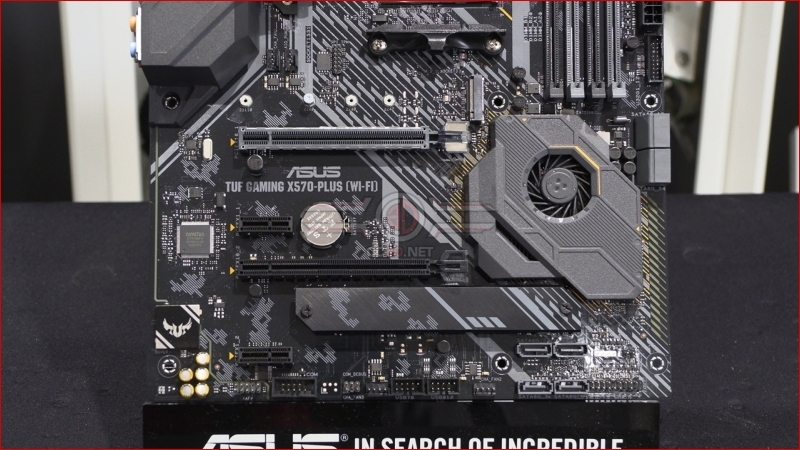 At the top right hand corner you can see two of the fan headers as well as the first of two ASUS AURA RGB LED strip headers to be found on the TUF Plus. 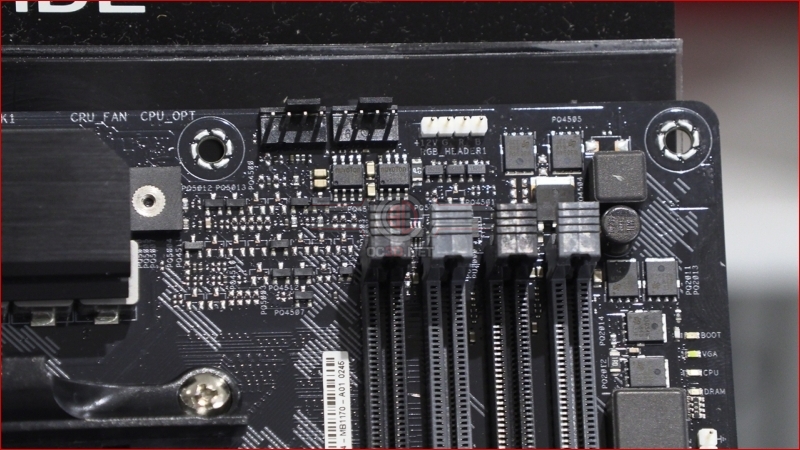 Next to the memory slots we find the front panel USB header, four of the eight SATA ports and heatsink which helps keep the chipset cool when the demands of the PCI Express 4.0 bandwidth are at their uppermost. 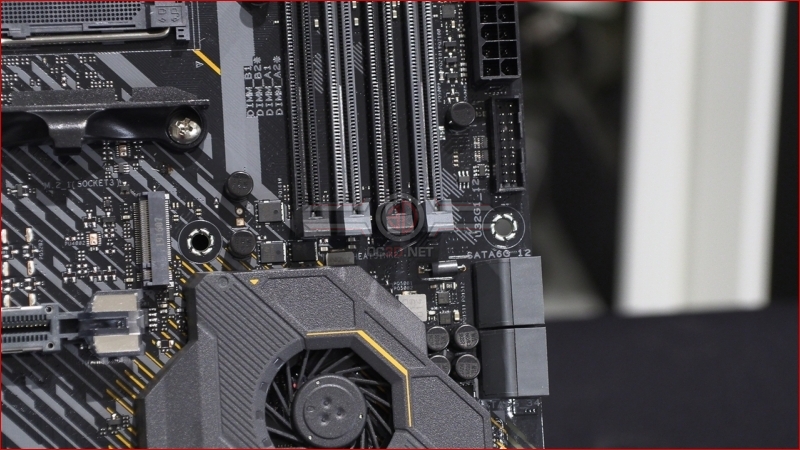 Half of the SATA ports are, for reasons we don't fully understand, vertically mounted. Either side of them we find fan headers and USB headers, whilst the right hand corner has the front panel connectors, an RGB header and the built in RGB lighting on the leading edge. 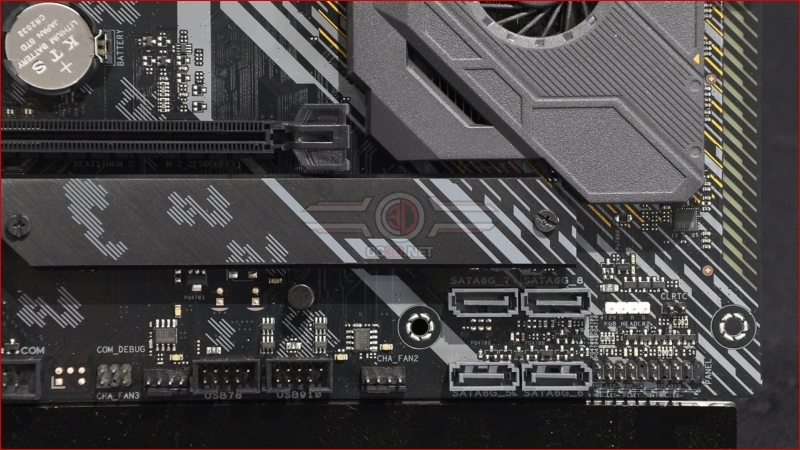 The audio section is split off from the rest of the PCB with the now de facto standard split to help negate any interference, whilst you can see the M.2 heat-spreader designed to match the PCB. At the bottom edge there are more fan and USB headers. 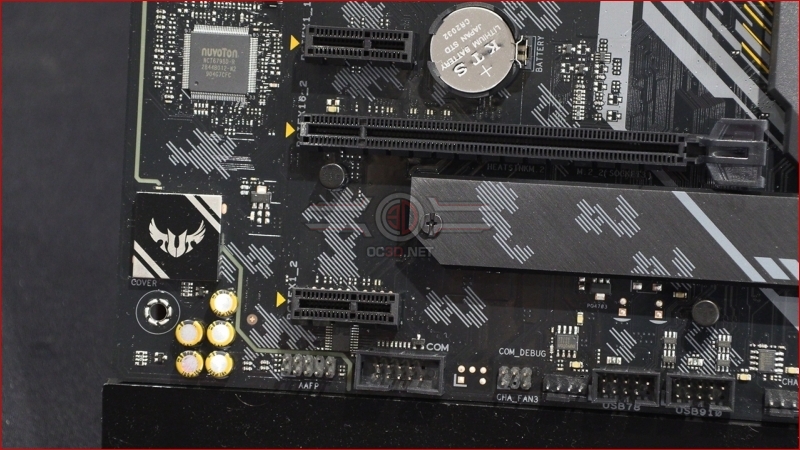 Around the back from top to bottom we have a combined PS2 port, USB 3.2 Gen1 connections, USB 3.2 Gen2 Type-C, DisplayPort and HDMI display outputs, Intel WiFi and Bluetooth 5.0, Realtek L8200A LAN port and the audio jacks. 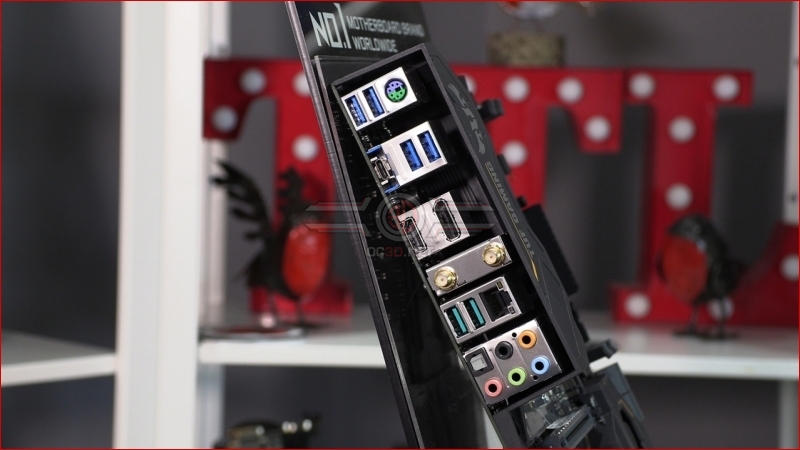 Dicehunter
I miss the original Sabertooth line of TUF boards with the armour, Yeah it was only for show but mixed with a full cover metal backplate it gave the board a really cool look and feel, These new TUF boards since Z170, Horrible looking, Onwards all look like high end Fisherprice toys.Quote

Warchild
Quote:
Actually I tested the P67 Armor with and without the armor long ago. If you had a CPU fan that blew down on the CPU as opposed to perpendicular, the temp drop on the VRM, and chipsets with the armor was a difference of 10C!!!!

Mainly because you could close the vents and generate a strong air flow underneath it. I think the Z77/97 also had this design, but then it became less effective. And now.. as you say, just for show.Quote
Reply