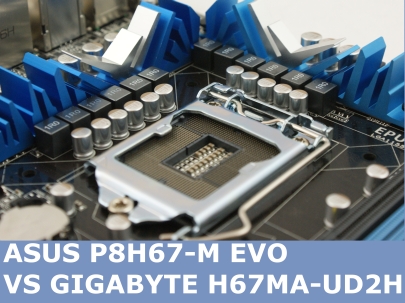 Really, this review was a means for us to both showcase the GPU capabilities of the new Core i3/i5/i7 range as well as take a closer look at compatible motherboards from two of the world's most popular motherboard brands.

So what did we make of them?

In terms of performance, we were pleased by what the Core i5 2300 had to offer. On the basis that we expect to see this processor for around £130, it is good to know that the consumer will receive a little more grunt (than the Core i5 760) for a smaller outlay. The deal is sweetened for those who have minimal graphics requirements as the Sandy Bridge's Intel HD Graphics has little to no trouble at playing 1080p video and can even deal with a couple of games. We suspect that other popular hits such as Counterstrike Source/Half Life 2, Left 4 Dead and similar will run without much fuss at all.

As for the motherboards, it quite difficult to distinguish between the two. Both perform near identically, have suitable board layouts and are expected to be very durable for the long term thanks to their 8 phase power designs. The Asus P8H67M EVO tips the scales somewhat with its novice friendly EFI BIOS however there is little else to say.

The biggest problem with these motherboards in our eyes could well be price. At £120, these motherboards are priced at P67 territory as well as performance based equivalents from the AMD camp. If you plan on building a computer for under £500, it is hard to justify spending this level of money on either the P8H67M or H67MA-UD2H when it is possible to purchase a similar AMD Phenom II X4/X6 and a AMD 880G motherboard for considerably less. If there was any reason to select the new 1155 platform for a general media system, it would be for its excellent video transcode performance, which we will highlight in the future.

As far as both motherboards are concerned, they are solid products. From an engineering perspective, they are both well built and are likely to form a suitable platform for plenty of mainstream users. Competitively speaking they are also both evenly matched so if you are in the market for a motherboard on a brand new platform, then these are prime candidates. However the success of these boards will inevitably depend purely on their price tag.

Thank you to Asus and Gigabyte for the boards on test here today, you can discuss your thoughts in the forums.