It's a bit of a change of scenery here at OC3D Towers today.

However, with the advent of the cloud and blistering internet connections the concept of having something which was truly a home office, rather than the home office just being the room you had the PC and printer in, has expanded. Now you really can work from home or, if necessary, run a small business without busting the bank. So whereas once you would struggle to find a gaming motherboard, nowadays you'll struggle to find a genuine enterprise offering.

As you might expect from a workstation motherboard, some of the numbers involved with the Sage get truly staggering. It has the usual X299 selection of 8 DIMM slots supporting DDR4 at 4133 MHz for mind-blowing bandwidth. Storage, always important, starts with the 'still pretty fast' eight SATA ports and quickly ramps up to the insane world of U.2 and M.2 NVMe drives which pump out numbers so high that you would think they'd just been to Woodstock.

However, the two major elements that deserve special jaw-slackening attention are the 7 (SEVEN) PCI Express slots that are backed by two PLX chips so that if you went for Quad GPU setups they'll all run at x16 (!), whilst if you wanted to populate every single slot to really expand your horizons and start reaching some insane compute numbers then you get 7 at x8. Just let that sink in. Normally with a 'gaming' motherboard the moment you populate two you're probably having to deal with 2 x8, and only on the really high end motherboards will you achieve 2 x16. This has 4 x16 or 7 x8 slots. That's bandwidth which is broader than Joe Pesci's accent in Goodfellas.

The second element which requires a good sit down after reading is the CPU power. The current premium Intel CPU is the Core i9-7980XE which has a TDP of 165W. The combination of attention to detail in the cooling and serious amounts of power phases means that the Sage can deliver 460W to the CPU. That's enough power to very nearly run three i9-7980XEs at full tilt.

This intense attention to detail hasn't meant that ASUS have skimped on the aesthetics though, so let's take a look at it in the flesh. 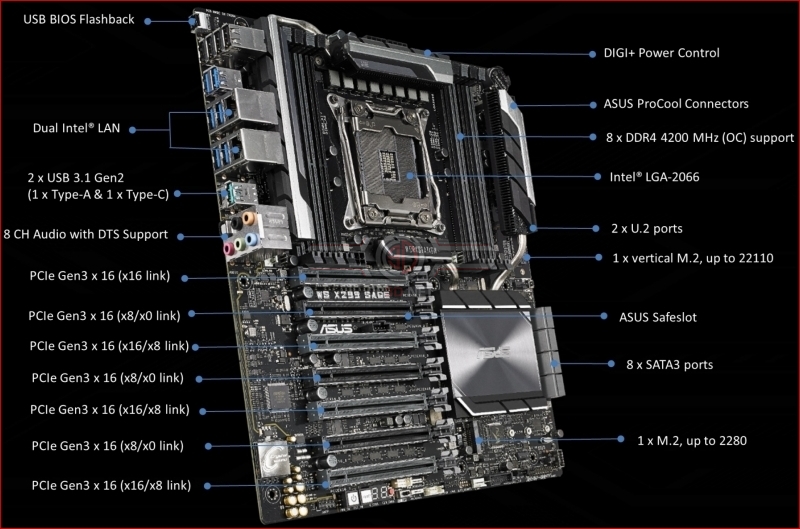 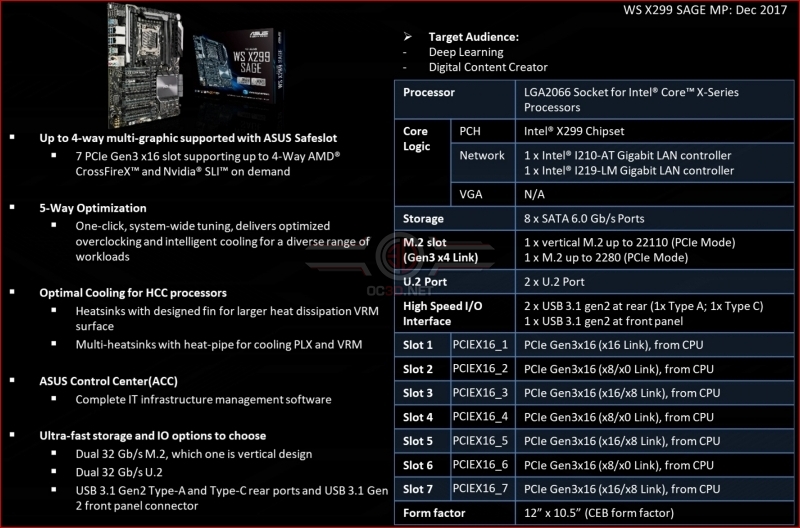 johnbellas
Any idea when this board will be available in the USA? It's been 4 months since they announced it and still no word.Quote

AlienALX
I must have missed this. Lovely board