Being a Prime motherboard the Deluxe II has white plastics. How much you like the looks are very much a matter of personal taste. We're fairly undecided as the combination of sharp angles and stripes make for a curious blend of 2000s angled design themes and the 'everything has stripes' aesthetic that was such a feature of the 70s. It's certainly unique.

You can also spot the two M.2 heatspreaders between the PCI Express slots - the third M.2 slot is vertically mounted just below the ATX 24pin - as well as the OLED display below the CPU socket. 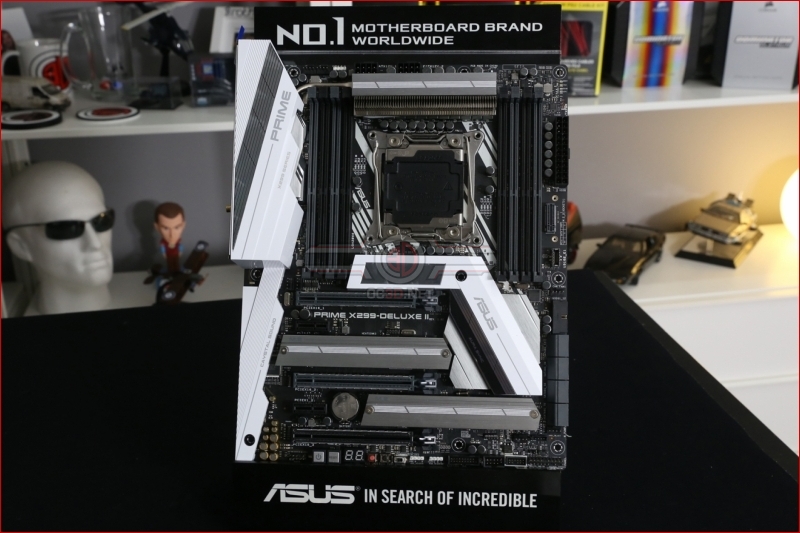 The quality of the ASUS X299 Prime Deluxe II heatsink is worthy of mention. It's been a long time since ASUS have used a fin solution on their high end motherboards, and given how much VRM temperatures limited overclocking on early models it makes perfect sense for their design team to have spent a little more energy ensuring the Deluxe II has no issues in this area. 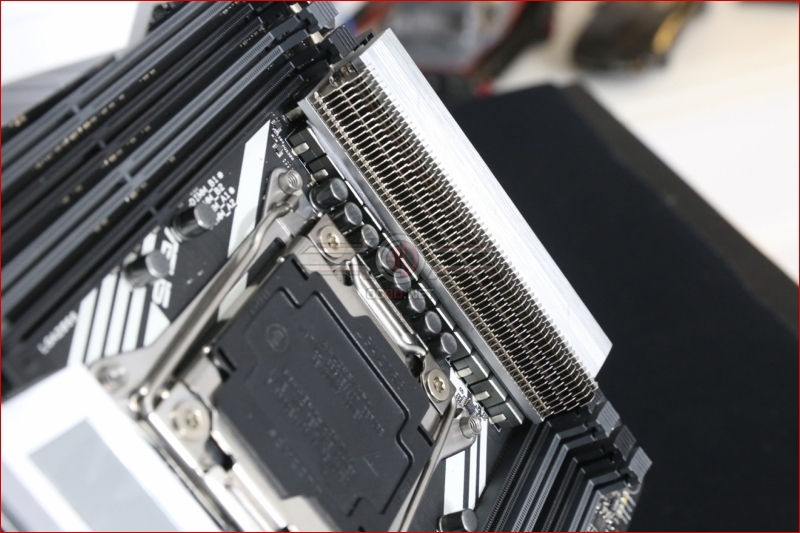 As well as another close up look at the excellent VRM cooling solution on the Prime Deluxe II, you can see how much has been squeezed into the top edge of the PCB. All X299 motherboards have limited real estate so fitting two 12V CPU connectors as well as twin CPU fan headers in alongside the ASUS RGB header without putting them in places that are likely to slice your fingers is a piece of careful design that deserves applause. 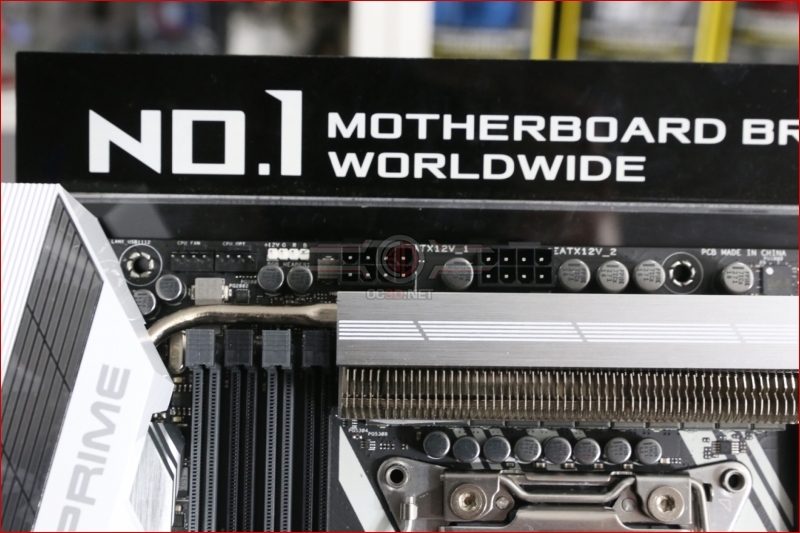 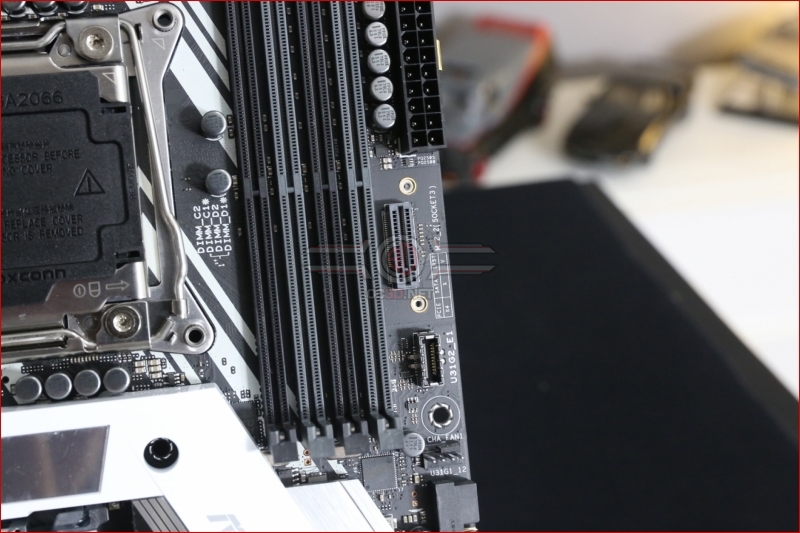 One area the Prime Deluxe II takes no prisoners is in the amount of storage options available. As well as three of the superfast M.2 connectors there are eight - count them - SATA3 ports alongside the USB 3.0 and USB 3.1 front panel connectors. Those of you with huge collections of drives will be delighted to know you wont have to choose between them or even hotswap any. 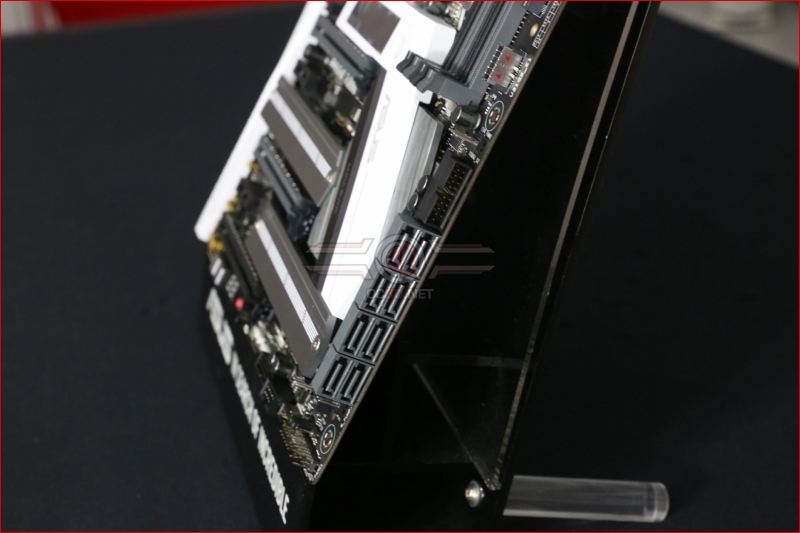 The Prime Deluxe II wouldn't be an ASUS motherboard if it didn't come equipped with a full set of onboard buttons, RGB and Addressable headers as well as the MemOK! switch that lets you boot even the most bizarre combination of DIMMs. 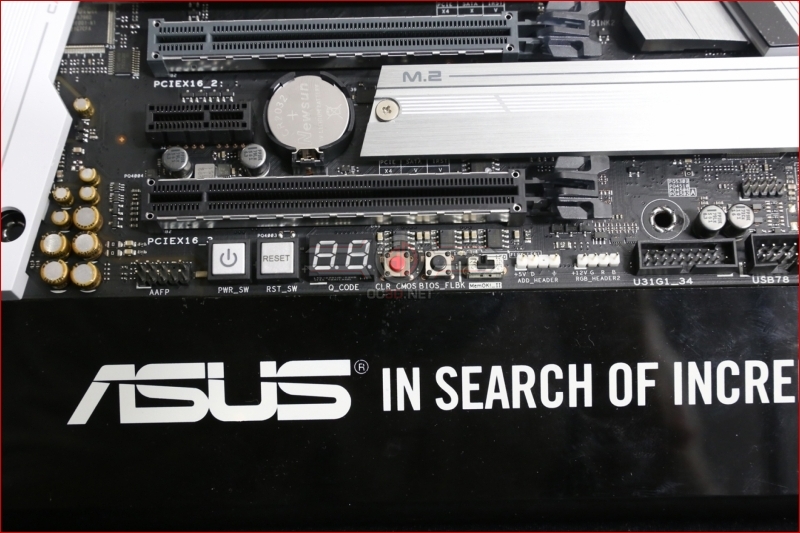 If you prefer to have your fans in more regulation positions then the Deluxe II has a dedicated AIO and Pump header below the left bank of DIMM slots. You can also see the M.2 heat spreader and its screw locking it in place. Nicer than a plastic clip. 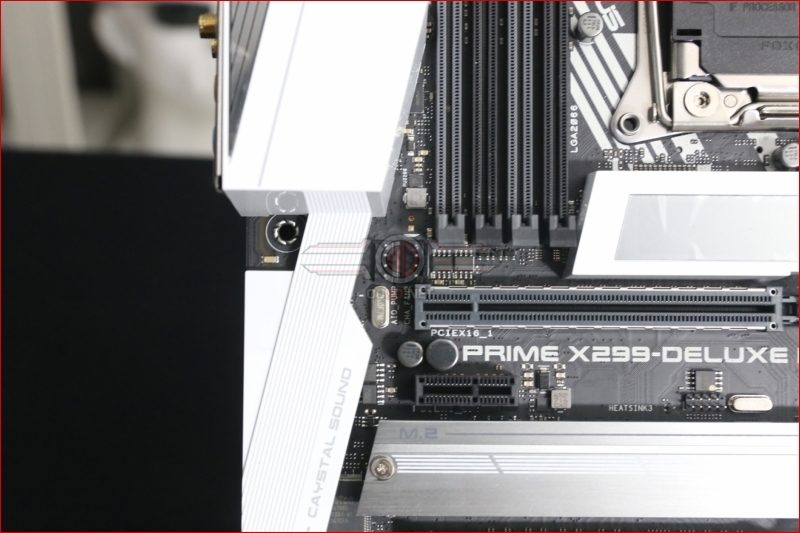 There are plenty of connections in the IO but one is deserving of special attention, the Aquantia AQC-111C LAN header supports - with CAT6 cabling - 5G speeds across your network. We understand that the infrastructure necessary to take full advantage of these high speeds is a significant investment at the moment, but it wont be long before it's affordable to all so it's nice to know you're future-proofed. Even better, if you have got a monster networking arrangement the Prime Deluxe II lets you explore these enormous transfer speeds straight away. 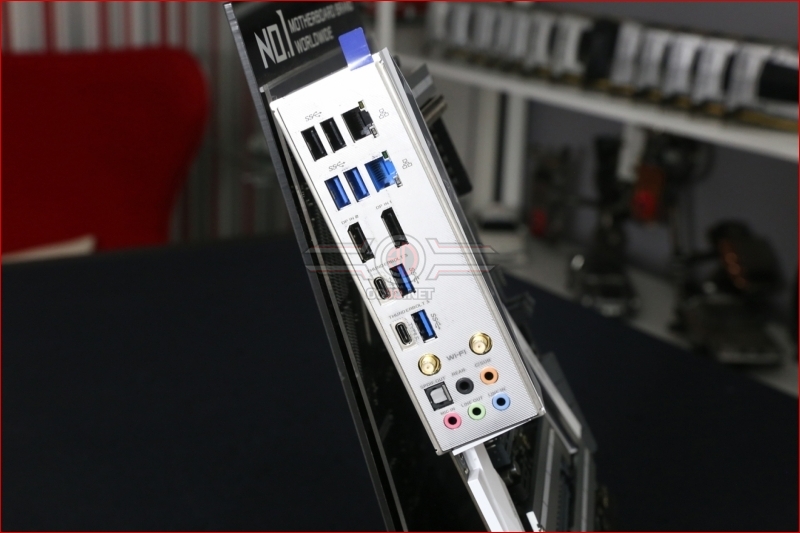 No matter how many headers there are on the PCB we can all do with a few extra fan slots. Partly because the beefier X299 CPUs require a serious amount of cooling, and partly because tucking the fans around the back make it much easier to keep the front side of your system looking neat and tidy. 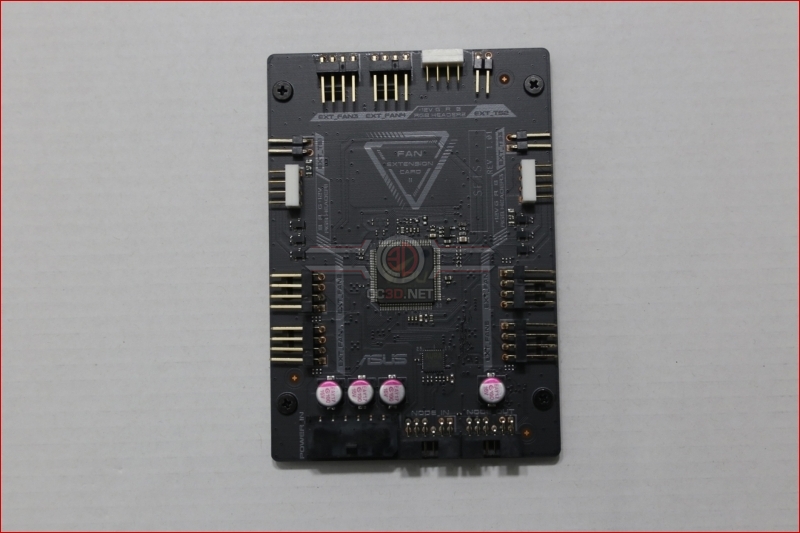 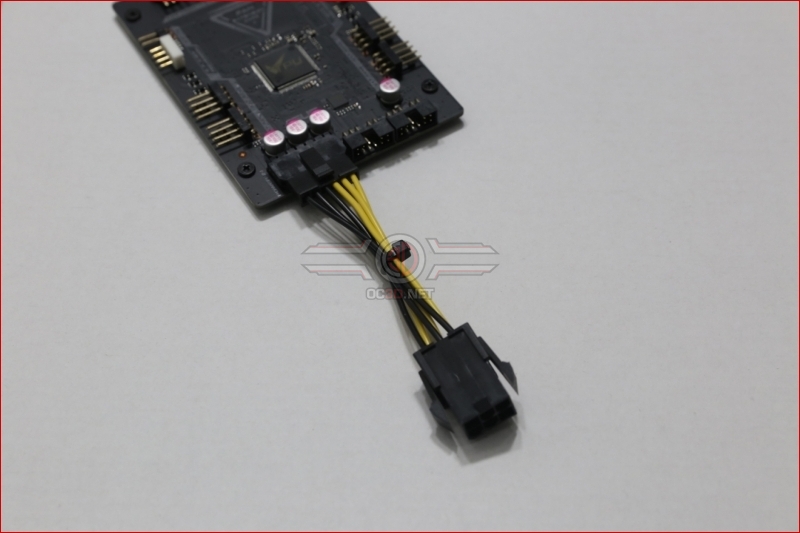 Avet
Disclaimer: This is a personal rant. I was looking forward to this board because i like ASUS, and i like Deluxe boards. (I am rocking Z97 Deluxe now) And this could have bean the perfect board for my next system in the near future (possibly). I need Thunderbolt and I was waiting for this board's release. I would be happy if i am wrong and this sin't the case.

Amazing looking board, but it has a catastrophic flaw. I read through documentation and it is not specified anywhere, but if you look at the lane distribution Thunderbolt 3 is connected via PCH. Also there is no block diagram in the manual. Hmm... Intel platforms don't have 24 PCH lanes, they have 4. Because PCH is connected to CPU via DMI 3.0 link which is PCI-E 3 x4. So PCH is basically a PLX chip that governs the traffic. It is enough to put 1 NVME drive on PCH slot, with couple of HDDs, with all the regular traffic (USBs, Network, etc.) and DMI is clogged up. Where do you find the bandwidth then for 2 Thunderbolt 3 pots? You can't run 1 at full speed via PCH.

They could have done it with CPU lanes. They have done it before. Previous Deluxe boards had crazy lane distribution. And you could connect anything. Rampage VI Extreme has good lane distribution. You could run Dimm.2 drives from PCH or from CPU lanes. If you run it form CPU last PCI-E slot is reduced to x4 from x8. If you run them from PCH, PCI-E x4 slot is disabled. Brilliant. And what was wrong with add-in board on previous Deluxe motherboards? If you need it use it, and you have proper CPU x4 lanes. If you don't, then leave it in the box. This way if you need Thunderbolt 3 you can't use it. And you can't put add-in board. And it says it supports it.

Just a cheep marketing trick to say that board has native support for Thunderbolt 3. If you need Thunderbolt 3 connectivity don't bother with this board. It doesn't support it. Go with any other board that has Thunderbolt 3 support via add-in card.

Back to the drawing board with this one ASUS.Quote

AlienALX
She is a stunner, though. Man that's a bloody good looking motherboard.Quote


Also my rant is - Shame that readers have to pick up on stuff like this, this is the stuff reviewers should be highlighting.

Gothmoth
Quote:
not to step on anyones foot here but....

reviewing today means benchmarking a few dozen apps and games. something that is completely useless for me. i don´t care about 5% performance difference.

the flaws a board has you will most likely not find on vlogs or "review" websites.

they install windows and run a few tests. then they focus on the next content to create. lately some folks focus on VRM temps and but that is as deep as it gets.

i have seen so many boards praised only to find obvious issues in real life.

example... a board has 6 SATA ports and not a single website (out of 5) mentions that 2 of them need to be disabled when you enable another feature.
it is a chipset (pci lane) limitation but all you read is "the board has 6 SATA ports".... yeah well i can see that. i can read a spec list and look at a photo.Quote

tinytomlogan
Quote:
Those kind of details get covered in the initial cpu/platform review - no need to bring it up on every single board.

As for the Thunderbolt - I have no way to accurately test it (I dont have one TB enabled screen let alone 2 or 3) and to say about the bandwidth Id need to say why its required and what the impact has been - not might be.
Sometimes you just have to do the best that you can do with what you have available.Quote
Reply