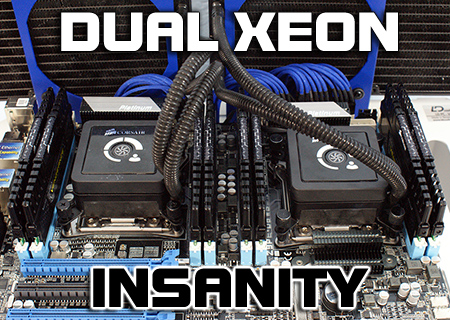 In a lot of ways the results are exactly what you'd expect. When we're testing things that rely heavily on a lot of threads, the Xeon pairing romp to the lead and don't ever give it up. Naturally the E5-2687Ws with their vastly higher clock speed and turbo speed come out best in all scenarios when compared to the low-watt E5-2660s.

There are, as always, some things we can learn from our testing. After all a review site would be of little use if we didn't broaden both our and your knowledge of current hardware as well as pointing out what the wise purchases are.

Firstly if you're thinking of purchasing a dual-CPU rig because you've got loads of cash hanging around but don't plan on doing much other than regular day-to-day tasks or gaming, you'd be foolish to do so. Unlike previous generations of dual-CPU setups there just isn't enough performance benefit to justify the immense costs involved. Passmark, PC Mark Vantage, 3D Mark and Unigine all demonstrate that there is a small loss, to a small gain in performance to be had, but generally a single CPU will do the job just fine. Certainly Unigine and 3D Mark see that for gaming and world records you're much better off just sticking with a lunatic overclock on your i7-3960X.

However there are clearly some scenarios in which there is no replacement for displacement. Or, if you'd prefer a more earthy metaphor, bigger is better.

Certainly if you need encryption, or work with large amounts of zip archives, or even if you plan on being the next Pixar, then you will see comprehensive improvements from having more cores, than less but faster ones. Even the relatively tiny speed of the E5-2660 has enough oomph under the hood to leave the 4.6GHz i7-3960X in the dust, and the E5-2687W has way more clock speed and potential than those.

So unless you have those very specific requirements, and bottomless pockets, you'd be far better served just going for something sensible. As we've shown countless times even the 2500K is good enough for nearly everybody and everything above that is purely for signature boasting. Let's not forget that a single Xeon E5-2687W is £1400. And you need two, plus the all the rest of the gear to go along with it. It doesn't make fiscal sense at all, not even for benchmark world record hunting thanks to their inability to overclock.

Looking specifically at the motherboard it comes in at £400 which is awesome for a dual Xeon board with this many features, it looks great unlike many server / work station boards and its EBB (12"x13") format which fits a much wider selection of cases than the massive HTPX boards. Even the NZXT Switch 810 has support for EBB motherboards just to put some ideas in your head. We haven't had the chance to get our hands on any other dual 2011 boards yet but we can say Asus have set the bar very high and kept the price sensible as well. With new releases due imminently its going to to take something special to beat the Z9 PE-D8 WS board and short of someone magicking up overclocking support we don't think they will have much of a chance.

Staggering performance. Even more staggering cost when you factor in CPU prices but still worthy of our OC3D performace award.

Thanks to Intel for supplying the Xeons for today's test. And all the companies involved. Discuss in our forums.

Matthias2437
It's a beautiful thing... that amount of processing power should be illegal.Quote

PetrolHead247
I seriously want a pair of these for folding. 114k PPD without any bonuses is insane!

that is awesome , nice one TTL cudos

But where can I buy a benchtable like that ?

BTW the link on here goes to a smaller picture ! Quote

Wasted for anything less than folding or rendering etc though.