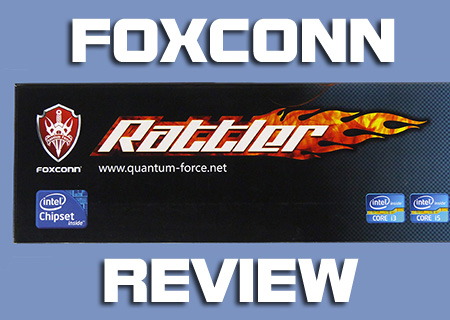 The Foxconn Rattler is, to paraphrase the famous quote, a bit like a box of chocolates. For every strawberry cream or caramel cup there is a ginger or the kind of toffee that will leave you chewing for a fortnight and in the end you're left feeling full, but wondering why you didn't just buy a bar of Galaxy instead and avoid the less enjoyable ones. A tortured metaphor, but one that is apt for the Rattler because it isn't quite as good as it should be.

Packing is excellent. One of the sturdiest boxes we can recall handling ensures that even the most ham-fisted of delivery drivers wont damage it. The accessories, whilst covering all the bases, are slightly disappointing. So much effort has gone in to making everything on the Rattler black and red, even the fan headers, that to have yellow SATA cables when black ones aren't exactly hard to come by, is a tiny bit of a let down. It's a small thing, but the devil is in the details.

Equally the board is paved with good intentions, but slightly lacking in execution. We have a CMOS clear jumper, but it's not in the easiest place to get at, and if you've got a bottom mounted PSU it's downright fiddly. You could ignore it and remove the battery, but that's placed right under where the the GPU will sit.

Oddest of all have to be the overclocking buttons. Now we love the ability to overclock from outside the BIOS, but these curiously adjust the BCLK which, as we all know by now, isn't really adjustable on the P67 chipset as the overclocking is all done by adjusting the CPU multiplier. You might be able to squeeze a couple of MHz out of this, but the BCLK really should be locked at 100 MHz and so we're not sure why Foxconn have gone in this direction with the on-board overclocking.

Speaking of the BIOS, it's easy to navigate and everything is where you'd expect. But contrary to almost all of the latest boards it's still running a standard affair, rather than the infinitely easier to use/more aesthetically pleasing EFI BIOS. It, like the IDE socket, just leaves you with the impression that Foxconn have been left behind in what is expected from a modern motherboard.

Performance is good though. At stock it's around the same results as other stock boards we've tested. Generally scoring lower but not deal-breakingly so. Overclocking is easy and whilst we couldn't quite get the heights out of our chip as we have on some others, the Rattler did take full advantage of the performance available to it.

Pricing is good at a mere £150, so it's right in the heart of the 'good value for money' end of the market. Normally this would mean we could look past some of the more curious elements as we're not paying top money. However it's the same price as the EFI-equipped, 5GHz, all bells-and-whistles ASUS Sabertooth, which really is so good and so cheap that if you're in the market for a P67 motherboard it should be your only choice.

However if you're looking for something a little different and understand that moving away from the norm entails compromises, then the Foxconn Rattler is by no means a bad board. It's only a few tweaks away from being right up there, but right now it just feels a bit too last-gen for us to wholeheartedly recommend and so we award it the OC3D Bronze Award.

Thanks to Foxconn for supplying the Rattler for review. Discuss in our forums.

SieB
Not a bad board but overpriced IMHO. The Sabretooth is still the best £150 P67 board.

steve30x
I like how far apart the PCI-E slots are. My motherboard supports SLI and CrossfireX , but the slots are so close together that the top GPU gets startved of air.Quote

badtaylorx
just from a aesthetic point of view it looks like a rampage rip-off,,, and a rather cheap one at thatQuote

Tortuga
Quote:
Not a bad idea, because I know alot of builders who choose the rampage just for the scheme. I wish I had money to burn like that. Id probably have the assassin by now.Quote
Reply