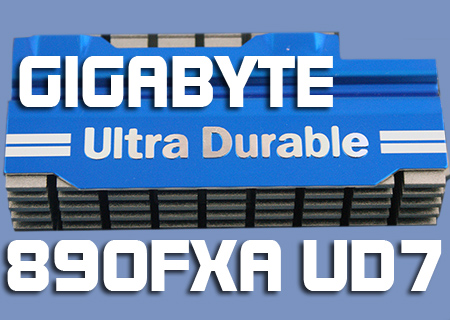 Down the business end of the UD7 we find the extra space afforded by the XL-ATX sizing allowing plenty of PCI-e slots to be installed on the board. Two x16 slots and two x8 slots ensure even the greediest graphics card owner will be kept happy.

Six SATA 6Gbps slots are great to find on the UD7. Normally with chipset technological turnover being so rapid we'd wonder why there was so much on a board that probably wont outlive the SATA technology, but AMDs AM3-based motherboards have been around for a long time now that you should be able to take advantage of so many ports, and if you've got the readies a RAID array on this motherboard will fly. 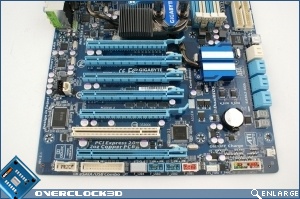 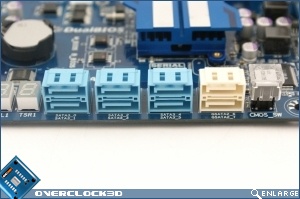 It's been a long time since we've seen such a clean area around a CPU socket. There definitely wont be an issue in installing any CPU cooler you can think of in the UD7.

Gigabyte must be listening. Previously we complained that the combination of water-block and air-chipset cooler was pointless as it wasn't good enough for either market. Now if you wish to install the larger air heatsink you have to remove the water-block. A great job of Gigabyte of listening to its userbase and implenting those little changes that can make all the difference. 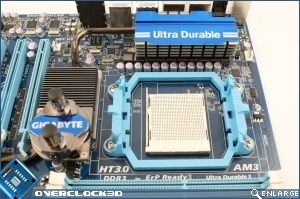 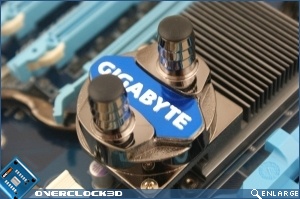 The "Ultra Durable" branded heat-sink (in case you weren't sure where the UD came from in UD7) is a fixture on the power-phase on UD motherboards. It always looks great and, unlike many similar heatsinks, isn't so tall or strangely shaped that it negates the installation of a large cooler or a exhaust fan in a case. 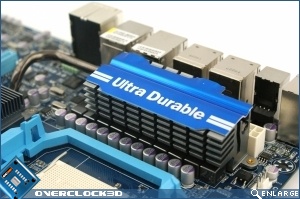 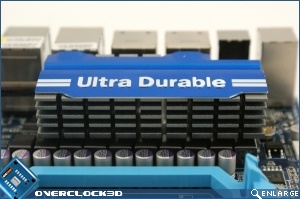 Here is a very cool little feature. We're all familiar with clear CMOS buttons. Anyone who's done overclocking has very likely accidentally hit it too without meaning to. Gigabyte have given the clear CMOS button on the UD7 a protective shield so you have to remove it before you can press the button. We feel like a fighter pilot flipping up the switch so we can hit the missile button or something. Yes we're all big kids now and then. 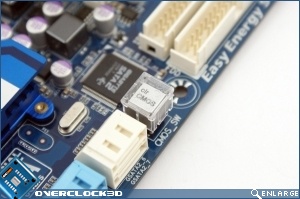 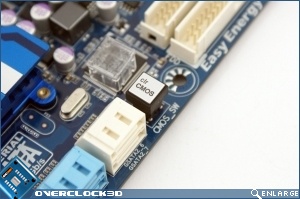 Hmm. In amonst all this great design there are always a few niggles. This is slightly more than a niggle though. On-board power and reset buttons are to ensure you can overclock out of the case so you can get it all stable before installing it more permanently. But you'll always need to have your ATX24 cable in. So once that is in place, and the RAM, you're really going to be struggling for space to fit a finger on the button.

It's especially odd when there is so much space down by the southbridge. 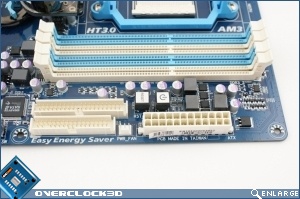 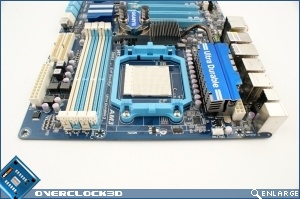