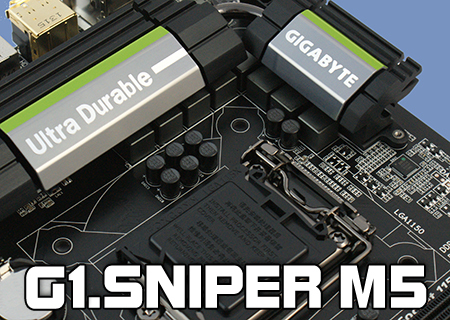 So we've looked at a good value Gigabyte motherboard, an MSI offering that was spectacular in every department, so now let us provide the a final option which is a performance motherboard in a small package. The Gigabyte G1.Sniper M5.

Demonstrating how quickly the Sniper series has settled in to the Gigabyte range, it didn't seem two minutes ago that we were surprised by the G1.Snipers performance, and equally impressed by the commitment to the military theme in terms of packaging and board design. Each variant has moved further away from the Sniper concept in design ethos, whilst retaining the good performance of the early efforts.

So if you're looking for a mATX motherboard to place your new Haswell CPU in, let's see if the G1.Sniper M5 could be just the ticket.

The big selling point of the M5 is the inclusion of the Creative Sound Core 3D chip. Rather than utilising one of the many RealTek variants, Gigabyte have gone full on with Creative, and some very clever alternatives which we'll look at on another page.

Will have to chose between this and the Gryphon. Might simply come down to price though, but I'm willing to spend more on this one if the audio is much better.Quote

AverageNinja
Thanks tom! Sexy board and I like that little bit of gold on the audio chip. Adds a nice accent!Quote

Feronix
Quote:
True, though the z77 version of this board used to be around 120,- over here (100 quid?) so I'm waiting to see what the actual price will be.

I don't have the funds yet anyway. Do you have any idea when your Gryphon review might be out (if you're doing one at all)?Quote

tinytomlogan
Quote:
No plans to atm. TBH a lot has changed at Asus and they make it far to hard to get stuff from them which is why they have all reviews live for NDA.

Ive got a Maximus 6 here but they seem to think delivering it the day before NDA is acceptable. Its not. I certainly wont be working my arse off for them again till they start showing me some love.Quote
Reply