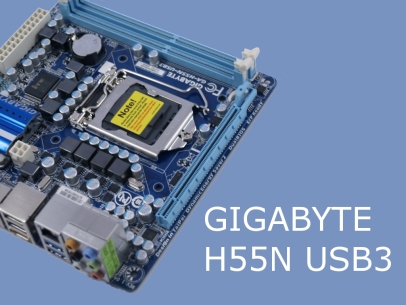 Arriving directly from our friends in Taipei, the H55N USB3 sports a thick cardboard outer packaging, decorated in a rather predictable white, blue and orange livery. Suffering not so much as a dent it's quite clear that the motherboard's protective shell has served its purpose. 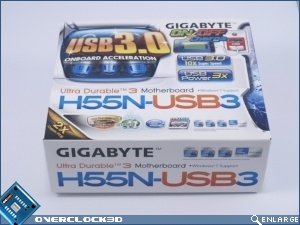 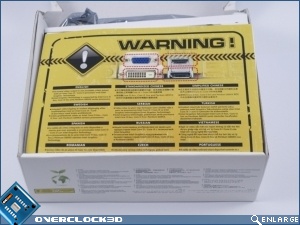 Opening upwards, the first article that we found was a warning leaflet that explained that the motherboard's video outputs are only usable when paired with Core i3 or i5 dual core processors. Following on from this, we found our accessory set which consists of two SATA cables, an I/O shield, Driver Disc and manual. 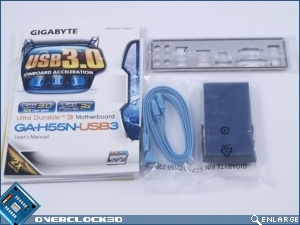 ...and here's the H55N USB3 in the flesh. The board appears very smart in it's blue and white colour scheme, which is arguably more mature than Zotac's bright orange and black theme. In terms of motherboard layout, there is only a few ways in which a Mini ITX item can be arranged. On that basis it comes to no surprise that it's layout of components is strikingly similar to the H55 ITX. 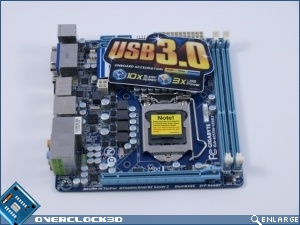 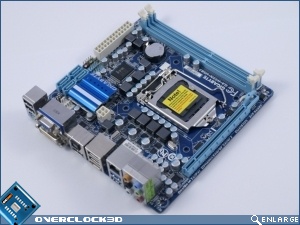 There isn't a huge amount of clearance around the CPU socket for wider heatsinks however this is to be expected. What's more noticeable is that the H55N USB3 doesn't offer quite as much integration as the previously reviewed Zotac. There is no onboard WiFi and there is a smaller USB and SATA port count. Regardless, this is not necessarily a deal breaker as we will discuss later.

The installation itself was relatively painless and the system drivers installed quickly from the bundled CD. In terms of general usage, the testbed appeared responsive and stable. The Realtek ALC889 audio module sounds very clear and all onboard devices appear functional.