There are 16+3 power stages on the Aorus Xtreme and the Infineon power stages are capable of delivering 70 Amps each for a total of 1330 Amps. We've already discovered that the 3rd Generation TR 3960X is more frugal than it's predecessors, but no matter how heavily you overclock it, the power abilities of the Gigabyte Xtreme will not be the limiting factor in breaking those world record calculative benchmarks. 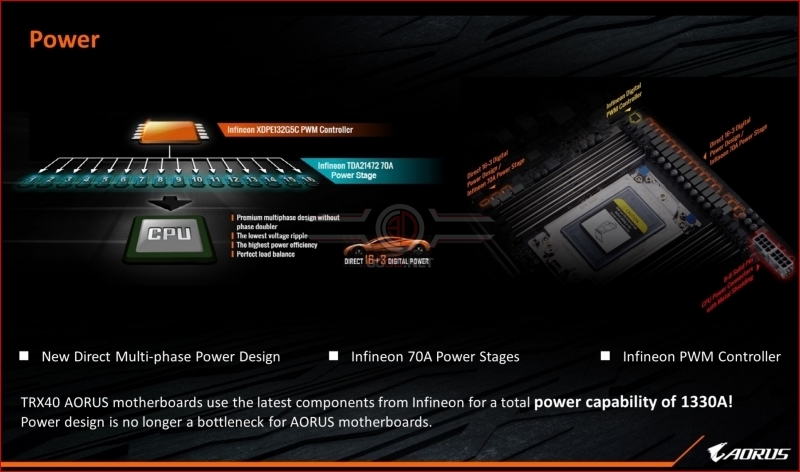 Having heavy power delivery is all well and good but you need it to be efficient as well and the TRX40 Aorus Xtreme promises smoothness to go along with the raw power. 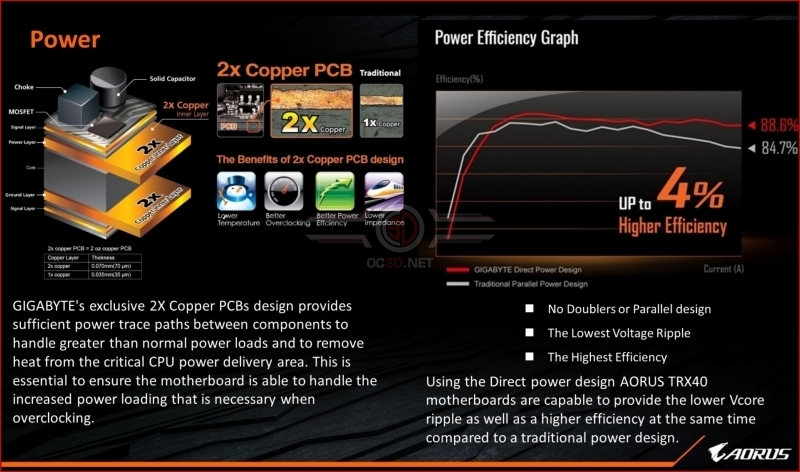 We have always been big fans of Armor coverings here at OC3D. Not only does it have a practical benefit in thermal terms, but it makes the motherboard and therefore your system look like a homogenous whole rather than a collection of disparate elements. 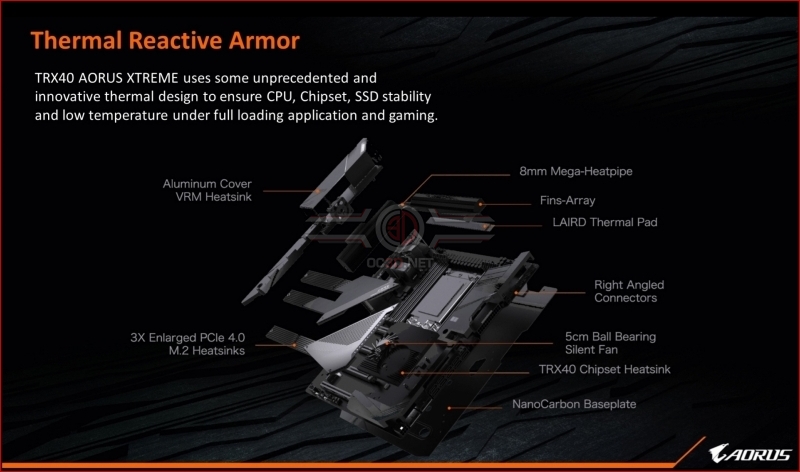 With so much power available from the power phases, and required by the 3rd Generation Threadripper CPUs as well as the PCI Express 4.0 devices it is no surprise that Gigabyte have gone all in on ensuring that every element of the Aorus Xtreme has been designed to dissipate heat as effectively as possible. From heatsinks to heat pipes to the Thermal Armor itself, the Aorus Xtreme has you covered in the best possible manner. 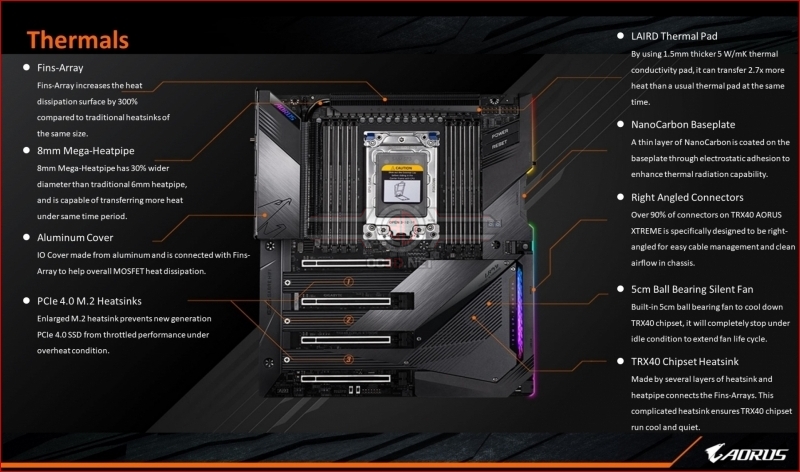 Transferring the heat smoothly across the PCB is one thing, but you don't want the back side of your motherboard to get overly hot and to this end the TRX40 Aorus Xtreme follows the trend we first saw on Gigabyte's X570 Aorus Xtreme by utilising the NanoCarbon coated aluminium baseplate. 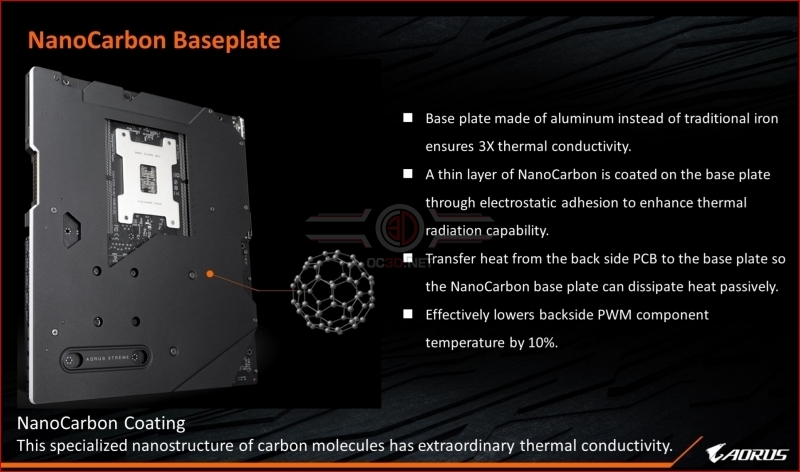 Although the Thermal Armor has obvious aesthetic benefits it is primarily about lowering the temperature across the components as much as possible for peak performance and longevity reasons. If the image below is representative of what we can expect in our testing then the Aorus Xtreme should carry on the good work of the X570 version. 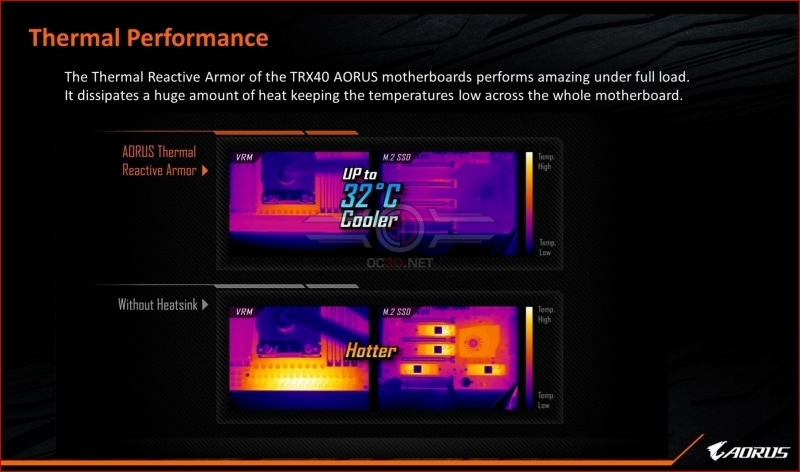 M.2 drives have rapidly become the go to storage option, and the inclusion of PCI Express 4.0 has only enhanced the already eye-opening transfer speeds available into 5GB/s and faster territory. With so much calculation performance available from the Threadripper CPUs the kind of creations you'll make will use up a lot of capacity and so it's good to have four M.2 slots built into the Aorus Xtreme PCB. If that isn't enough though... 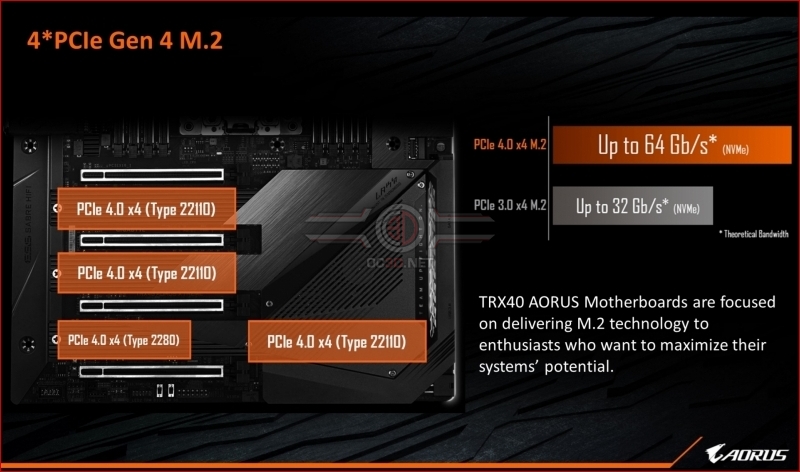 Although it's unlikely that you'll run out of slots built in to the PCB, if you're a particularly heavy user or require biblical amounts of storage capacity then you'll appreciate the included add in card which gives you even more M.2 ports and, thanks to the use of an actively cooled solution, guarantee that your transfer speeds will always be at their peak. 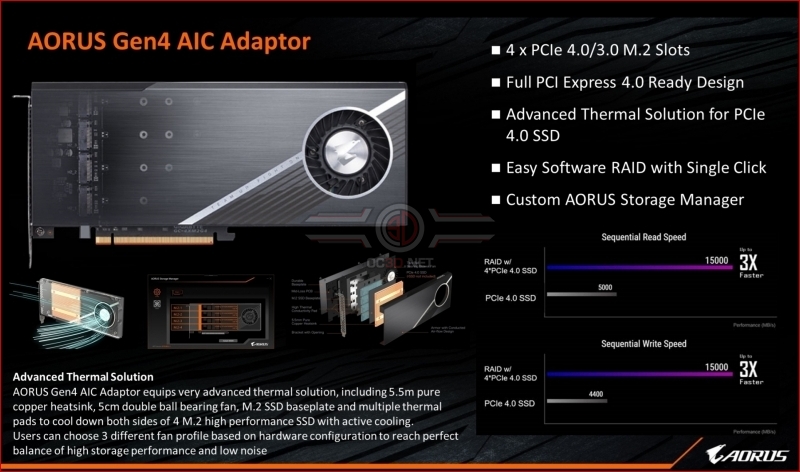