Please note this review was written prior to the AGESA F7b BIOS update. Our graphs have been updated to reflect the new results, but the text remains the same as the fast single threaded stock performance affects so few of our results and none of our overall opinion.

We are sure you must be aware that any major product launch such as the latest Zen 2 means an awful lot of work for us here at OC3D. We don't mind at all, as we're enthusiasts first and foremost and always like seeing what is new in the hardware world. It does, however, mean that occasionally in the wee small hours when we're beginning to get tired that our brains do funny things. With the Gigabyte Aorus Master that funny thing is the introduction of the Metallica song Master Of Puppets every time we think of it. It's the Gigabyte Master (MASTER!).

With a few options to pick from we thought that we'd start with the Aorus Master as it's in the middle of the three Gigabyte Aorus models we have available to us and therefore the one that will find the most favour with a potential purchaser. The Extreme is naturally the beefiest model specification wise, but with a suitably meaty price tag, whilst the Pro is close the Master, but missing a few little elements. Thus we'll start here.

The Aorus range has been a massive success for Gigabyte, becoming their version of the ASUS Strix range or MSI Carbon, where the sales numbers are absolutely enormous and a brand identity has quickly established itself. This doesn't just bring benefits to Gigabyte as a company because sales is financial clout, but if something is popular there is a tendency to ensure that the design is harmonised across your entire range of products, letting people have a system that integrates well and has the aesthetics that appear like it was designed as a whole setup instead of a collection of disparate hardware.

For our purposes the biggest step up the Aorus range has brought is in quality. Gigabyte slightly lost their way for a little while but, in a manner similar to AMD themselves and their Zen platform, they've used their experience and company flexibility to rapidly identify and address their problems and solve them quickly rather than continuing to head down a developmental cul-de-sac until it's too late to return.

The Gigabyte X570 Aorus Master is the second from the top model in the Gigabyte X570 range - the Extreme is the only one above it - it has everything that is new with the latest X570 platform. Naturally there is support for the 3rd Generation of Ryzen processors, but elsewhere we find big improvements in available bandwidth. The headline feature has to be the inclusion of PCI Express 4.0. This is the latest update to the high bandwidth connectivity that has made all of our lives easier and our PCs faster, and in this case the PCI Express 4.0 standard now ups the transfer rate to a massive 16 Gb/s of unencoded data per lane, double that of the current PCI Express 3.0 format. The PCI Express 4.0 will also form the underpinnings of the new AMD Navi graphics cards which should be releasing around the same time.

All this extra bandwidth is particularly beneficial to us thanks to the massive rise in M.2 drives as the core component in all modern systems. Nobody could have predicted how fast the M.2 format would overtake the SATA SSD drives we'd only just got used to, but there is no replacement for blistering speed when it comes to the adoption of new technologies and the M.2 drives are extremely fast. This does take up PCI Express lanes though, so there is always a finite limit to how many you can use in conjunction with your graphics card(s), so there is always a balance to be found to ensure that one isn't crippling the performance potential of the other. Now with even more bandwidth available this should be less of an issue and we should see speeds swiftly ramp up.

Elsewhere the X570 Aorus Master also has the latest WiFi format in place, the 802.11ax, which massively improves the speed of the wireless connection potential. Assuming of course you have the hardware necessary to take advantage of it. A 802.11ac 1x1 connection has a maximum speed of 433 Mbps, the 802.1ax 2x2 on the Master supports 2400 Mbps. This need for the networking infrastructure also true of the Realtek 2.5 GbE LAN port which is significantly faster than a 1 Gb connection we're used to and perfect if you've got a high bandwidth home network waiting to be taken advantage of.

It isn't only the PCI Express and Networking that have seen improvements, as the Gigabyte X570 Aorus Master updates the USB to 3.2 Gen 2 Type-C, and even the famous Gigabyte RGB Fusion has seen a revision, now sporting a 2.0 suffix. 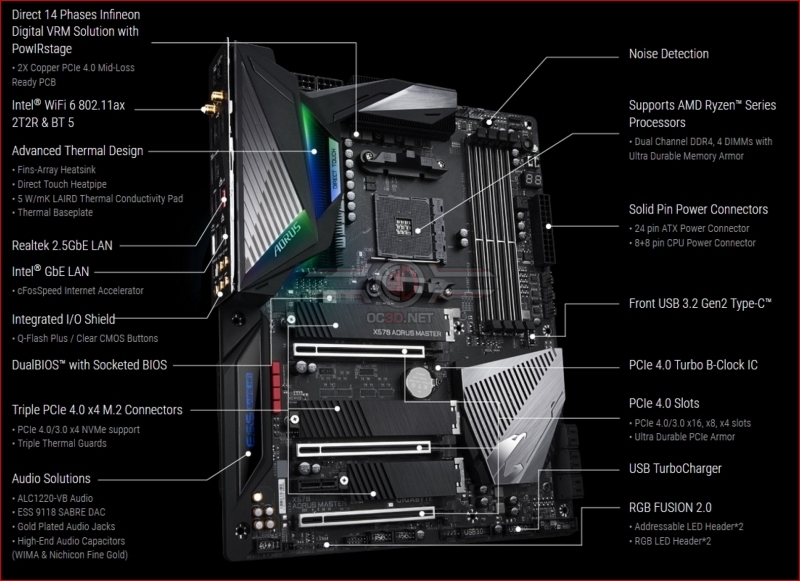 Keeping all your components cool is a vital part of any modern system. As the core counts and clock speeds ramp up through the roof in recent years, so has the need to dissipate all that generated heat. Not only is it beneficial to the longevity of your processor and motherboard, but the least amount of heat soaking into your case also helps your graphics card and M.2 drive to perform to their highest. As you would expect from a motherboard entitled Master, the X570 Auros Master has plenty of hybrid fan headers as well as lots of temperature monitoring points to ensure that your system is as cool and stable as can be. Gigabyte have also brought their silent technology to the X570 platform with noise monitoring cables ensuring that you aren't compromising your hearing when thermal demands are low. 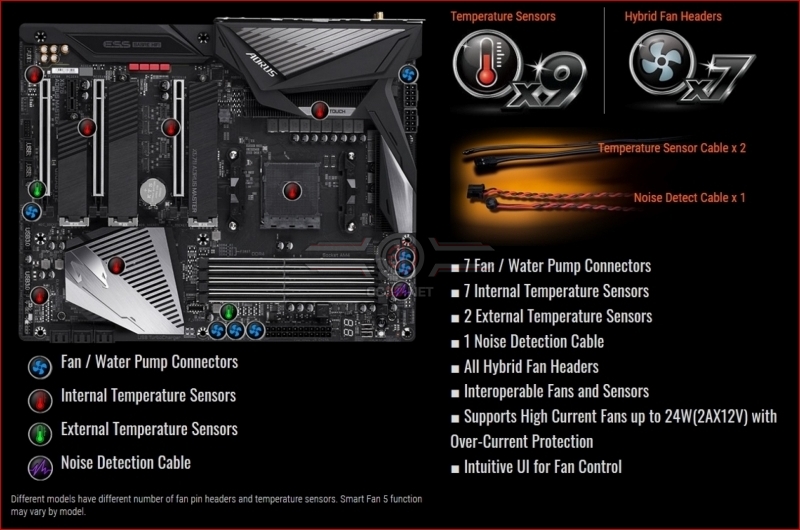