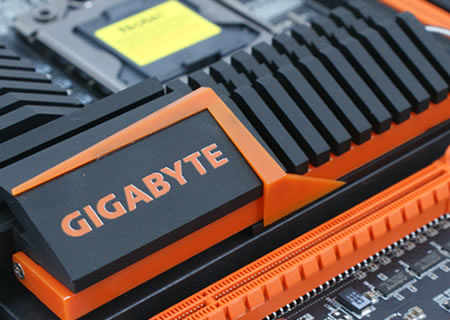 It's very rarely here at OC3D that we actually find ourselves arguing over who gets to test a certain product and, let's be frank, to get a group of journalists who work with hardware day in day out to actually care enough that they threaten to take the biscuits ransom and, god forbid, cut the plug off of the kettle in an attempt to secure the review sample from the others, it's then and only then can you sit back and realise that we may just have something very very special on our hands.

The product that caused all the commotion at OC3D towers was the Gigabyte X58-OC. A motherboard designed from the ground up by HiCookie of hardcore overclocking stardom to be THE best X58 overclocking motherboard on the planet. I can confirm after threatening VonBlade with the lack of caffiene and explaining this motherboard is about far more than its Cincinnati Bengals colouring that he conceded and allowed me the chance, maybe even the last chance to have some proper fun with the X58 platform I quite openly love.

The X58-OC is about far more than bright colours and massive heat sinks that some other brands would say denotes an enthusiast motherboard, however there is so many hardcore features crammed into the X58-OC its actually quite mind boggling. For now though we will give you a first look at some of the features to whet your appetite while I lock myself away in an air conditioned room with a multimeter and a big pile of CPU's and GPU's to torture!

So enough waffling lets move on and take a look at some of the features this board has to offer. We have to start with what seems to me the insane power delivery possible from the 12 phases around the CPU. Up to 1500w input is possible from the two 8pin power connectors and output to the CPU is capable of a staggering 1200w! Imagine having a Corsair AX1200w running at its limits just powering a CPU overclock and you should understand quite how insane these numbers are! The low temperature chokes are capable of handling up to 50 amps each and the entire motherboard is fed with what they call fast and durable Poscaps. Right at the top of the board there is also a very handy set of dip switches to change the PWM frequency in real time from 600K to 800K or 1000K! Moving on to the other side of the board you have yet another selection of goodies. The power button is here by to be called the engine start button! The '4G' button is an instant 4GHz overclock button, this seems a little strange because if you can hit this frequency on your own your shouldn't have even bought this! The DeBug LED is always handy to work out what part of your overclock is borked / hardware is busted and should help you see that post screen again fairly quickly. There is also a large panel of voltage monitoring points for you to accurately keep an eye on whats going through your board when the clocks are starting to go beyond high! Now the + and - buttons are genius, one set are for the multiplier and one for the BCLK, the gear button also ties in with these so you can change the BCLK increment from 0.3MHz to 1MHz for the ultimate in fine tuning when in the OS...

Now all this overclocking needs cooling, and no matter if you are using DICE or LN2 you will always be grateful of easily access able fan header points, the X58-OC doesn't disappoint here either as it has a total of 7 well placed fan header points scattered all around the board. It may seem very strange to see SATA power connections next to the SATA ports but don't get confused here, these are actually to add extra power to the PCI-express lanes should you be rocking a hard core multi GPU configuration. This allows you to load different phases of the PSU to allow for a greater stability when really pushing your GPU's hard and also stops any chances of overclocking the 24pin power connector.

Lets head over the page for a look at the board in all its glory (before we cover it in putty!)

Alicarve
i do like the colour scheme, cant wait to see the performance it is gonna kick out

Karlos_the_n00b
Thanks for the preview Tom. Really looking forward to see what you can do with it.

Anyone else think those sata power connectors for the PCI-E slots are genius? Why haven't we seen those before instead of power connectors mounted half way up the board? Really hope those catch on.Quote