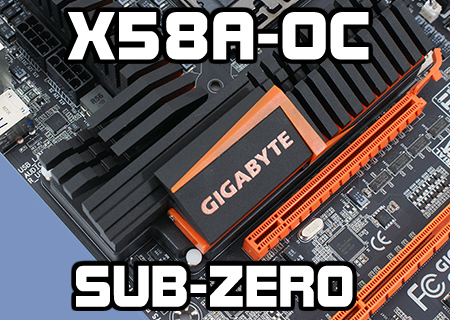 Firstly we needed to establish the general performance of the OC board. To put things into perspective the last time we thoroughly thrashed this chip on our Rampage Extreme we managed to obtain a fairly stable 4.5GHz. Here 4.6GHz was obtained with hardly any effort at all. Unquestionably this board does exactly what it sets out to do. 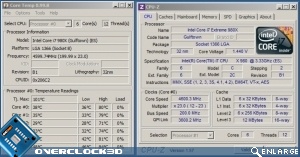 A Moment of Silence

Ladies and gentlemen of the congregation, at this moment we ask that you all bow your heads and take a moments reflection to remember a fallen comrade. Our Core i7-980X had been with us over a year and in that time had provided us plenty of pleasure. It was young, but it was eager. I first met it when it was just a wafer. Little did we imagine then that it would grow into the Hexcore beast that it was. Who can forget its place as the heartbeat behind our Quad-SLI GTX480 test?

Sadly it is no longer with us having gone to that silicone graveyard in the sky. The combination of some very frosty temperatures and some serious overclocks were too much for its weak heart. It died at 5.9 GHz with friends and family by its side and will be fondly remembered by all. 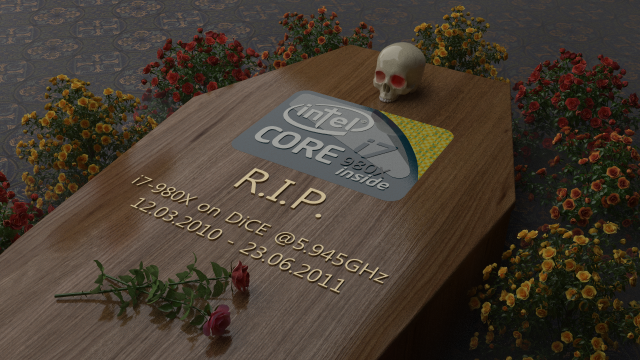 The King is dead, long live the King. Recalled from the war-room and into the frontlines our testing continued apace with the Core i7-990X.

One of the biggest failing points when attempting leading-edge overclocks is actually booting into Windows. Speeds that could be either stable, or at least stable enough for the required CPU-Z screenshots, can often blue screen just because the OS load is particularly harsh. It was here that the OC buttons on the Gigabyte X58A-OC really come into their own, as you can boot up in a stable state, and then use the onboard adjustments to start gaining those precious extra MHz.

With the pot stuffed with DICE, and resembling some B-movie scientists lab, the 990X was coaxed gently past the point at which its predecessor joined the choir invisible, and onwards until we hit an extremely impressive milestone. This milestone just happens to be (at the time of going to press) The fastest 990X on DICE in the world and also the fastest 990X on any cooling in the UK, not bad for a subzero beginner! We'll let the CanardPC validation screen tell the rest of the story. 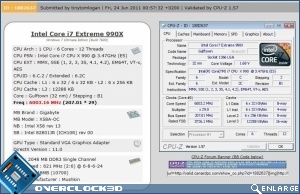 Now considering this is our first attempt with non-standard (water/air) cooling, and certainly the first time we've reached such giddy heights, the ease of which we obtained this clock cannot be underestimated. The Gigabyte X58A-OC was an absolute joy to use, being as bombproof as one could possible hope.

Of course, even with Dry Ice serving to keep everything extremely cool (although when dealing with sub-zero cool is obviously relative) this isn't a stable enough overclock to run some of our tests with, and having lost one chip we certainly didn't want to lose two thousand pound chips in a day. So with that in mind things were backed off to a mere (!) 5.4GHz. 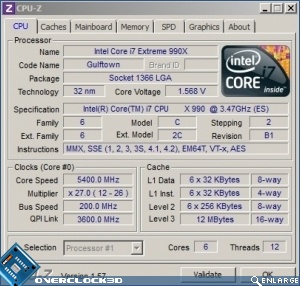 With these speeds available, our tests aren't really comparable to anything we've previously run, so our results will be very different to what we normally show at this point. But still very worthy of your attention.