The power phase uses a direct touch heatpipe as well as a heavily finned heatsink to ensure that all those 90A MOSFETs are kept cool in operation. Above that we find the first two of many fan headers sitting either side the two 12V CPU 8PIN power connectors. 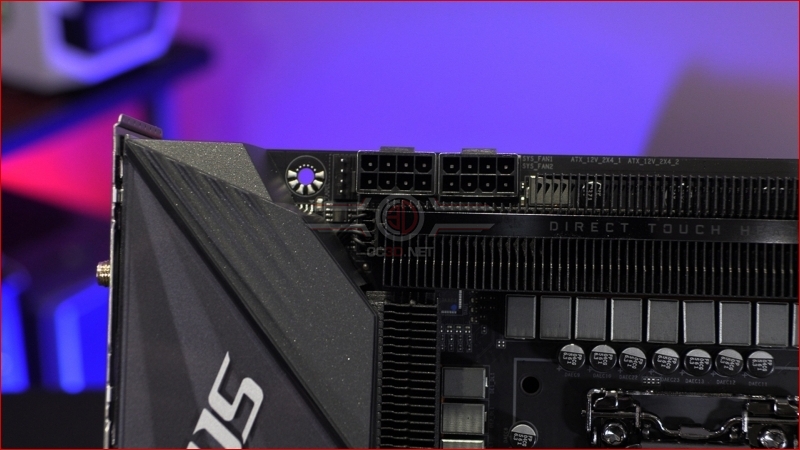 The top right of the motherboard isn't found wanting for connectors. Two CPU fans as well as two System/Pump fan headers take care of all your cooling needs, whilst next to those - above the power button - are an addressable and regular RGB strip header. 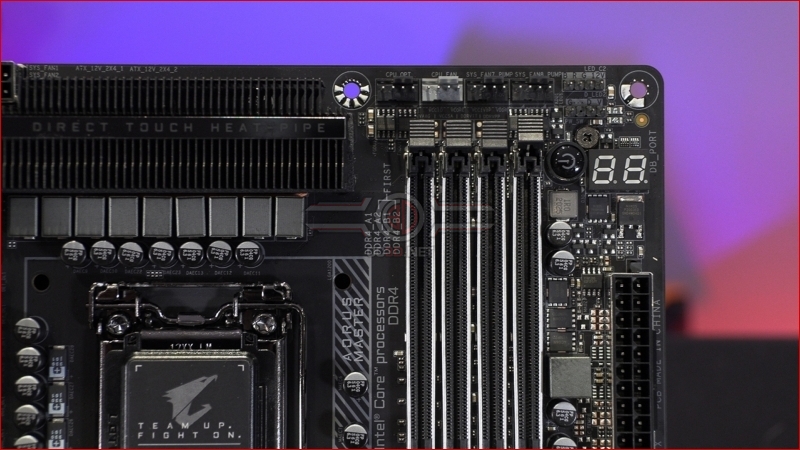 The DIMM slots are braced to help with longevity. It's worth noting the Aorus Master can support DDR4 of over 5000 MHz, should you happen to have spent a fortune on some cutting edge RAM. Below the 24 pin ATX - also braced - is another system fan header and the two Type-A front panel USB headers. 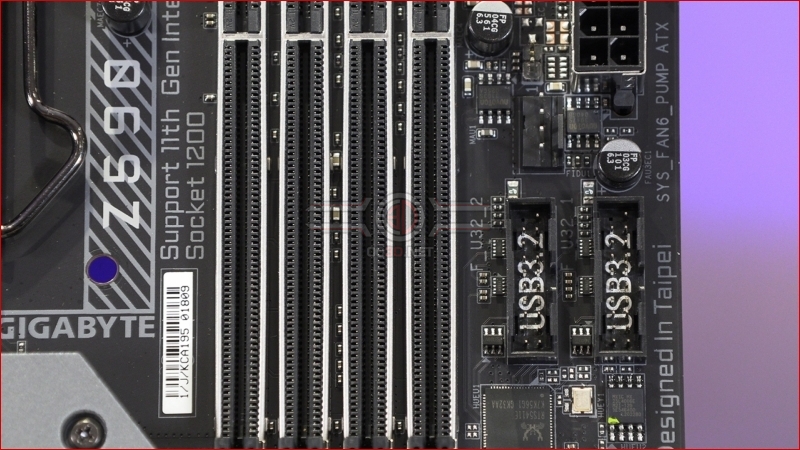 Continuing our tour we come to the Type-C USB header, should you own a modern case. There are just six SATA ports but with support for 3 NVMe M.2 drives storage shouldn't be an issue. 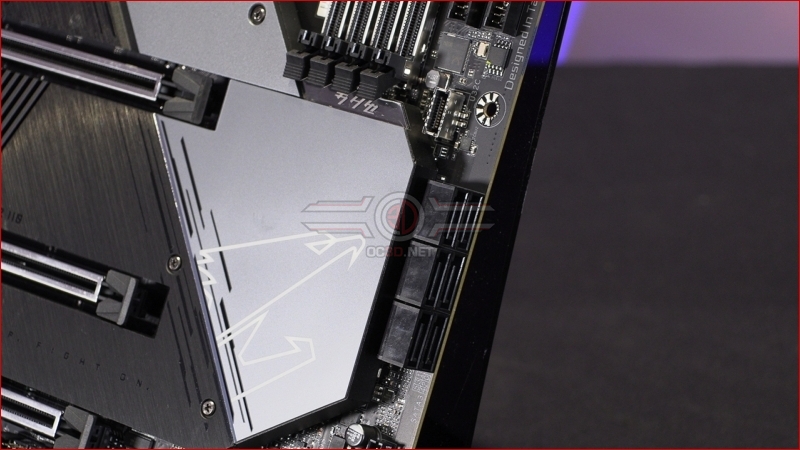 At the risk of repeating ourselves the bottom right hand edge of the Aorus Master is also home to many fan headers and front panel connectors. The keen eyed amongst you will spot the reset switch next to the leftmost fan header, and next to that the noise sensor. We're not sure if we'd trust a noise sensor algorithm to control the cooling of our system, but perhaps we're just old fashioned and prefer to manually set all our fans ourself. Next up two USB 2.0 headers for the RGB on your AIO or other control functions. 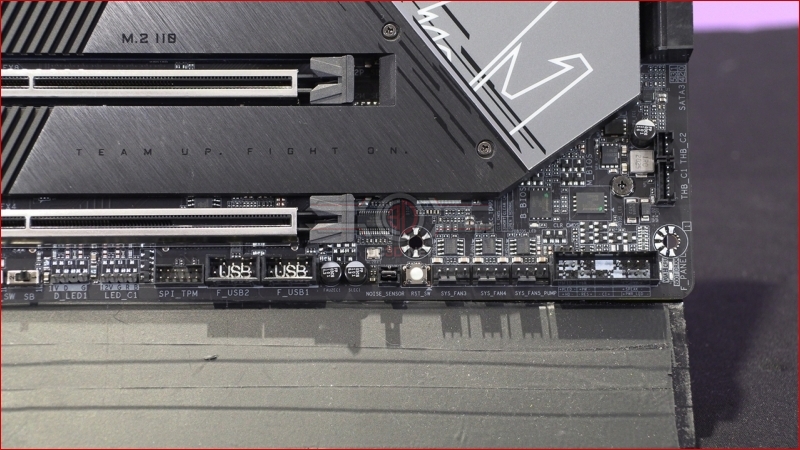 Lastly the RGB LED and addressable RGB LED strip headers are next to the switchable BIOS - a famous Gigabyte feature and perfect if you like a balls-to-the-wall setting alongside a 24/7 one. 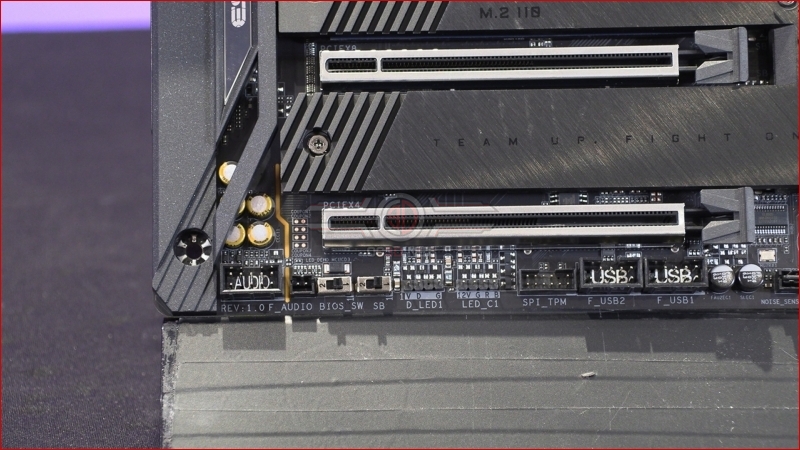 The majority of the lower side of the PCB is given over to the three PCI Express 4.0 M.2 heatspreaders. It's also nice to see all three of the PCI Express slots braced. Normally we just see the primary slot. It's a testament to the attention to detail Gigabyte have put in to the Master design. 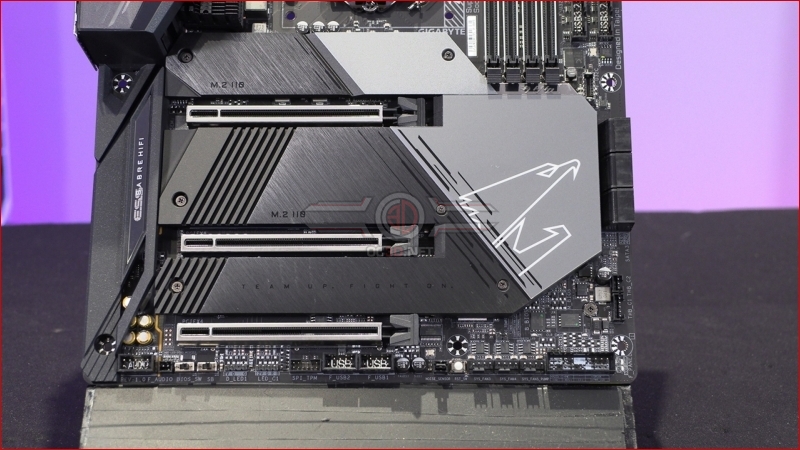 Lastly before we look at it lit up a closer look at the 18+1 Smart Power Stage as well as the big, bold branding. Not long now and we'll have an 11th Gen CPU to fit into the LGA 1200 socket. 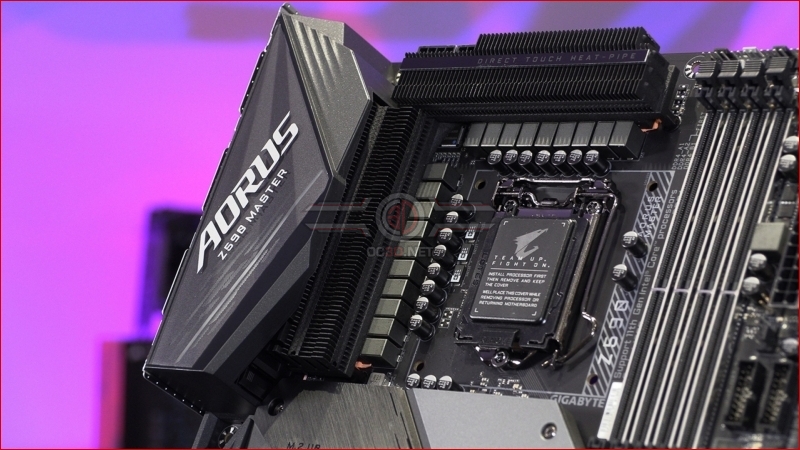 Tom Sunday
Was wondering in how the new Gigabyte Master Z590 will ultimately stack-up against the Asus Z590 VIII HERO? I am sure that both will command close to $500 each, as they are in the same enthusiast luxury league.Quote

tinytomlogan
The Hero will be up next.....Quote

FTLN
Thanks for mentioning Thunderbolt3 headers this time

Lets hope Gigabyte didn't just put them on the engineering sample and then decide to take them of the production boards.

A very important deciding factor for some of us when purchasing....Quote

Tom Sunday
Quote:
For starters Tom your reviews here have all been simply outstanding. Not to be putting the heat on you, but these particular mobo discussions and or reviews (Z590 Hero versus Master) will most certainly influence my purchasing decision. Or for that matter many more avid fans here appreciative of your expert advise and observations.Quote
Reply