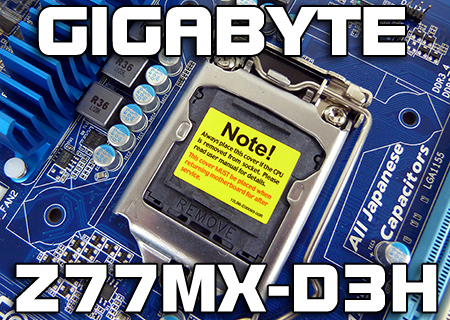 Let's start with something fresh, the Intel HD4000 integrated graphics.

The HD3000 was good for powering what a lot of places would call a home office PC, but it didn't really have the power for anything but the lightest gaming. The HD4000 upgrade provides some extra performance and a lot of under-the-hood tweaks, but the reality is that it still isn't going to be able to run anything but the most undemanding gaming options on the market. The P tests in 3D Mark are at 1280x1024, very casual-gamer friendly resolutions, but still the graphics are found somewhat wanting. However if you just play Sims 2 (for example) and browse the internet and watch some BluRays, then it has more than enough to cover your needs.

As for the D3H itself, it's very good value. Where it stacks up in the grand scheme of things is difficult to assess as it's clear that the UD5 results had some issues due to the tight deadlines and will require revisiting at some point. As a pure overclocker though you wouldn't expect the D3H to be able to keep up with the heavyweights and nor does it, largely thanks to the use of a 4pin ATX power for the CPU.

But 4.6GHz with some gentle prodding is certainly more than enough for most applications. Even better it happily ran our G.Skill memory at its rated 2400MHz speed without batting an eyelid.

The actual benchmarks reflected nicely this performance boost too. PC Mark, in both guises, replicates a large amount of the typical use that the Z77MX-D3H is likely to undergo and the Gigabyte motherboard gave us the highest results in our graph in both tests. With the HD7970 installed all of the results were on a par with that of the UD5, showing that this is definitely the little motherboard that could.

With a lot of connectivity options, a small size, small price (around £100) but bags of performance, the Gigabyte Z77MX-D3H is absolutely worth a look for those of you who don't mind the slightly limited overclocking, and wont miss the very few bells and whistles that have been trimmed off. By virtue of packing in the performance whilst still keeping the price nice and low, the Gigabyte Z77MX-D3H is awarded our OC3D Gold Award.

Thanks to Gigabyte for supplying the Z77MX-D3H for review. Discuss in our forums.

moving on..... awesome mobo for the priceQuote

SPS
The light blue and white are awful coloursQuote