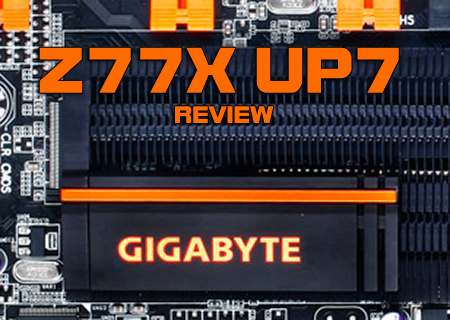 The top of the range 7 designation has been up in the air a lot in recent times. Although all the major LGA1155 chipsets have ended up with a UD7 model, they were never the first out the door. Normally a manufacturer will release their top end model first for the early adopters, then gradually trim the features down for the large volume models.  The Z77 chipset has been around for a little while and the first serious motherboard we saw from Gigabyte was the awesome Sniper 3. Now we're back in the world of their 'regular' models and we finally have a Z77 UP7 to whet our appetite.

After the problems of the Z77 UD5, and X79S UP5 it speaks volumes that Gigabyte have not only chosen to bring the UP7 to the table, but have given it the exclusive black and orange colour scheme last seen on the blazing fast X58 OC. This is no regular motherboard with a few extra bells and whistles, but a ground-up behemoth aimed squarely at dominating the world overclocking record table.

With the combination of the 7 moniker and the orange highlights this sets up lofty performance expectations for what Gigabyte are bringing to the table. Have we got a Maximus Extreme beater on our hands? Something that will make the mighty Sniper 3 seem inadequate? Let us get down to business.

By now I'm sure you're all familiar with the regular Z77 feature set, so what does the UP7 add? Strictly speaking it's not about what it adds so much as what it doesn't take away. This is a feature rich motherboard right up there with the very best. Although few will use them we have all the possible iGPU outputs. For those seeking records there are five PCI Express 3.0 slots, with four of them controlled by a PLX8747, and one that goes directly to the CPU for those single card world record attempts. Add a plethora of USB ports and fan headers, and you wont want for places to plug things in.

Finally, as we will see on the following pages, the motherboard has BCLK and multiplier buttons alongside the regular power ones to enable those extreme overclocks once the niggly business of loading Windows has been dispensed with.

tinytomlogan
Quote:
VB did the review dude, he may of tested here but the words and thoughts are all his.Quote

badtaylorx
songwriters all across the world put out genius works of art.....

but its the lead singer thats gett'n his duck sick!!!Quote

toxic123
i am personally not a huge fan of the orange due to it not really matching any case other than the phantom nor any memory that i'm aware of other than black colored. but it still looks great and performs great.Quote
Reply