It can't have escaped your attention that Intel have retaliated to the release of the 3rd Generation Ryzen Threadripper CPUs with the latest entrant into their X series of processors with the Intel Core i9-10980XE. This is an update of the Core i9-9980XE and has the same eighteen cores and 36 threads on the 14nm process. However, it has seen an increase in the potential clock speed boost utilising prioritised cores and selective core boost to maximise productivity in those applications that don't require every core. The big improvement for the end user is the massive reduction in price. Sure it's still Intel's flagship processor and is still very much for enthusiasts, but this time around you don't even need to choose which kidney you can live without. More affordable and better? Sounds pretty much perfect.

This release has given the manufacturers a good opportunity to revisit their current range of X299 motherboards and refresh them to take advantage of the latest advances in technologies, as well as quietly improve certain elements that had a stickier reception. One such element, which ASUS themselves acknowledge, was the different aesthetics of the Rampage Extreme and Rampage Omega. The Omega most definitely took the utilitarian approach to its design philosophy, being all about provide the best thermal performance for the beefy eighteen core Intel beasts.

With the Rampage VI Extreme Encore ASUS have gone back to the drawing board and produced a model which straddles the design line between the original Rampage VI Extreme and its Omega stable mate. Improvements to the quality of power stages, now utilising TDA21472 rather than the IR 3555 have allowed bigger power amperage, and this has been tamed by the introduction of two 30mm Delta fans. If you're as old as us the concept of tiny fans fills our ears with fright, whilst the word "Delta" usually meant fans which could aurally replicate a jet engine in a pinch. Thankfully that was a long time ago and so there shouldn't be any issues here.

Elsewhere the inclusion of 10G networking, the latest 20G USB 3.2 Gen 2x2 sit alongside improvements to RGB lighting and an all-new full colour OLED display for the ASUS LiveDash. This can be used for simple things such as a clan logo or more useful features such as system monitoring. Vital if you're in the middle of a full-screen task but want to keep an eye on your temperatures and voltages. With fan headers which support 1A/12W fans, as well as High Amp and Water Pump headers which can handle up to 3A/36W of draw, there is much to enjoy in cooling your system. How does it benchmark? Read on.

Before we get to the Intel Core i9-10980XE processor, let's look through the many elements of the Rampage VI Extreme Encore.

On the left hand side of the Extreme Encore we find all the elements that are attractive to us as end users rather than people who want to overclock until your CPU is left squealing from the feeling. There are USB ports everywhere, without a single USB 2.0 or 3.0 there to make up the numbers. Instead it is largely composed of USB 3.2 Gen 1 ports, with a couple of Gen2 and even a Gen 2x2 which has a 20Gbps throughput potential. In other high bandwidth items we have the 10G and 1G LAN alongside Intel's Wi-Fi 6 AX200, and the OLED LiveDash. If you're running multiple GPUs you'll note the three PCI Express 3.0 slots which work in 16/16/4 as well as a PCIe 3.0 x4 slot for non-GPU AICs. 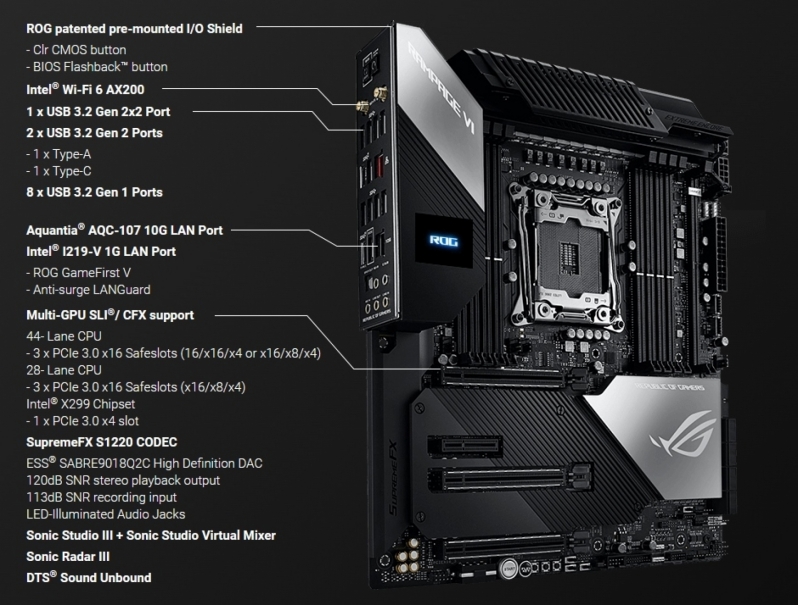 Any time you're expending this much money on a motherboard you want to have one which will last for a significant period of time, and wherever you look on the Rampage VI Extreme Encore you'll find those touches which will not only ensure the longevity of the motherboard itself, but also anything you plug into it. It might not be sexy or worthy of the advertising blurb, but it's important to have. 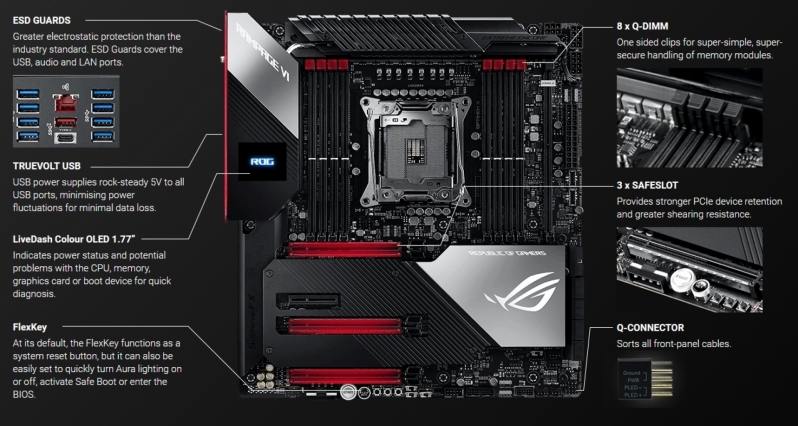 We always are amazed at how fast the technology world moves. No sooner had we got used to the idea of a single M.2 slot than we get a motherboard with four. One RGB header has long been usurped by multiple RGB headers as well as addressable headers for more complicated lighting arrangements, whilst the move from air cooling to AIO or fully custom water loops has meant that the Rampage VI Encore has more than enough fan headers and water flow monitoring points letting you keep your system as frosty as you desire. 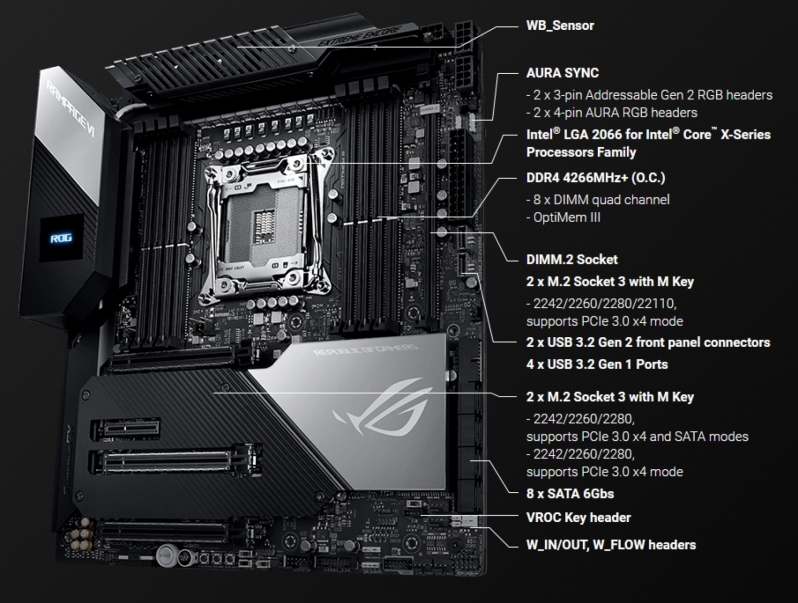