The motherboard we'll be using to test the Intel Core i7-5960X is the ASUS X99 Deluxe. Finally a motherboard with ice white heatsinks. It has taken a long time for motherboard manufacturers to catch up to the rest of the world. As you can see from the one on the right, the amount of circuitry on modern motherboards is almost moving to a level beyond the space available. With the eight DIMMs it's astounding how much extra room the additional four take up. We're used to it with the original X79s, but the extra hardware supported on the X99's really squeezes the PCB to capacity. 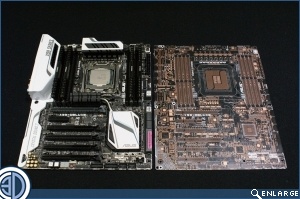 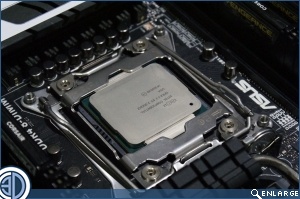 The X99 Deluxe includes the ASUS OC socket, which we'll look at in detail in the Rampage V Extreme review, but it's still a nice surprise to find it included in a non-ROG model. Don't underestimate the importance of that and definitely check out the Rampage V Extreme review whilst you're here. With 8 DIM slots, 4 full PCI Express slots, alongside the increased amount of SATA ports and boss audio solution, the X99 Deluxe truly earns its Deluxe moniker. 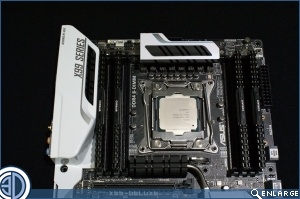 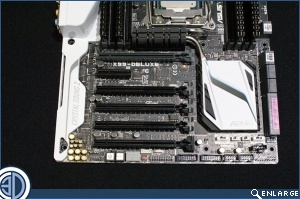 Because different CPUs in the latest Haswell E refresh come with different amounts of PCI Express lanes onboard, 40 in the top model and 28 in some of the other ones in the range, then the 2x/3x switch is important to enable the Deluxe to dedicate the maximum possible lanes to the slots you're actually using. 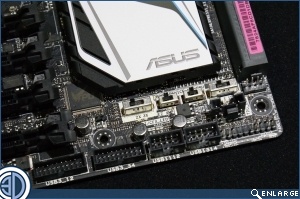 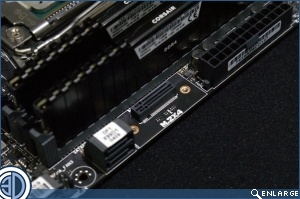 There are more additional elements than we could possible in a review that is, ostensibly at least, about the i7-5960X. However, two that we particularly like are the addon card that provides x4 PCI Express support for the M2 drives, ensuring that both your current drive and any future ones that move from the PCI Express 2.0 x2 to PCI Express 3.0 x4 are supported.

The other cool addon is the fan controller, which allows you far greater flexibility in both the amount, and placement, of your system fans. This has benefits both to extreme overclockers, and to the average user who just wants to route their cables neatly. 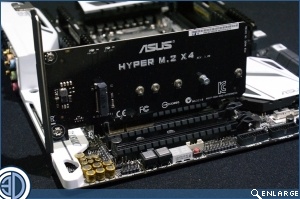 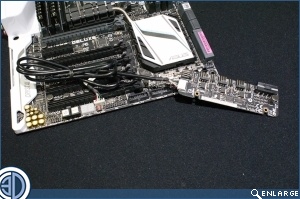