With the release of the X299 chipset we recently took at the excellent eight core Intel Core i7-7820X and found it to be a great performer, easily capable of matching up to the ten core i7-6950X that came before it.

Whilst any major Intel CPU tends to be a pipe-dream for the majority of us, the release of these new processors has come with the additional benefit - beyond the increased performance we mentioned above - of a price reduction. So whereas the i7-6950X was around £1500, the i7-7820X is a mere £570, yet has around the same performance. Hopefully then this new i7-7900X, a ten core behemoth, should be the equivalent of a theoretical 12 core, whilst still being significantly more affordable at a snip-like £950.

Obviously £950 is still a beefy investment, but it's so much cheaper than the i7-6950X that you could afford the motherboard and RAM, or Mobo and cooler, along with the processor and still have enough for a pint.

As always with hardware, everything is relative. But given what has come before the pricing of this latest Intel monster actually ends up as good value for money. Has it the performance too?

Compared to the i7-7820X we've just reviewed the i9-7900X has a couple of extra cores giving four extra threads. This has the natural power/thermal affect of reducing the base clock from 3.6 GHz to 3.3 GHz, so at stock we might see the i7-7820X overcome its minor core deficit. At the sharp end of performance though the extra cores, aided by an increase in level 3 Cache and a whopping 16 extra PCI Express lanes should mean that the i9-7900X has enough architecture to sit happily at the top of all our graphs. Does it? 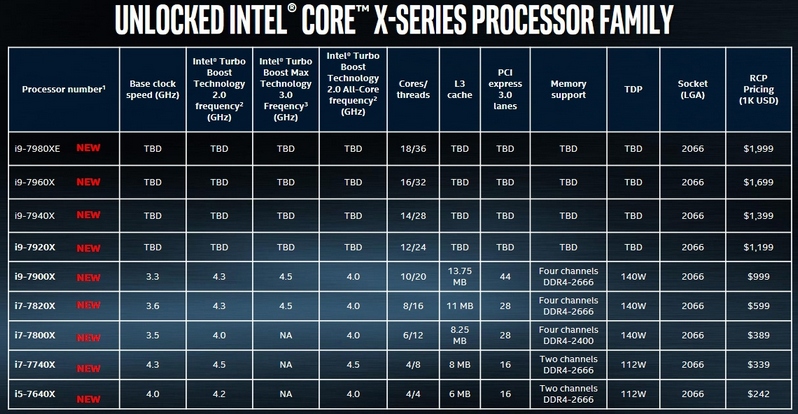 Dawelio
Quote:
Provided you haven't missed a corner due to the lack of sleep though

Korreborg
Awesome review. Like the fanboy rant, SPOT ON

Greenback
Thanks for missing sleep to give us the full review.

TheF34RChannel
Stewie as Deadpool, should do an episode if it doesn't exist already. Oops we're turning it into a hardware/fashion review discussion