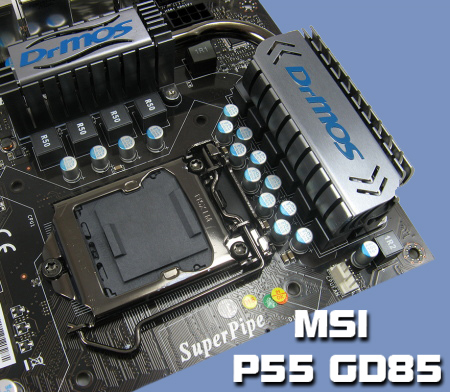 The MSI P55-GD85 is very nicely laid out. On the left we have a large G with the MSI logo within. On the right hand side of the box is the de facto standard list of various third-party technologies and manufacturer highlights.

On the reverse we have the main elements of the OC Genie, which we'll look closer at later on, the many features that MSI have equipped the GD85 with, and a list of the technical specifications we saw on page one. Considering this is very much a medium priced motherboard the list of features MSI have crammed onto it is mightily impressive. 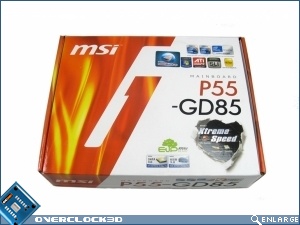 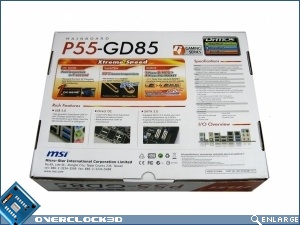 On the side we have a huge GD85 logo, leaving us in no doubt as to exactly which model this is and from whom. Once we open the lid we can see a fulsome inclusion of cables and bridges. Slightly giving away the places that savings have been made is the plain cardboard nature of the shelf on which they are kept.

Of course if there is a place we don't mind seeing the odd cut it's on the packaging, as long as the product is better because of it. 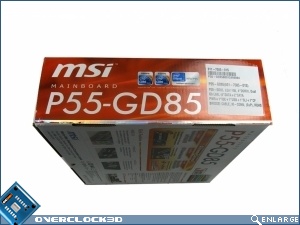 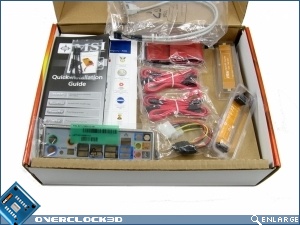 MSI have included everything you could desire, from left to right we have a 2 port USB extension, IDE cables, 4 SATA II Cables, a Molex to SATA, the SLI and Crossfire bridges, front panel adaptors, thermal extensions and the IO Shield. Definitely not left wanting for anything and the only slightly curious thing is that on a motherboard with such a pronounced blue theme, as you'll see soon, the cables are red.

On the right is the documentation for the many features. Not often documentation is worthy of mention unless it's amazingly sparse or excellent. MSI have definitely given us the latter with the manuals covering everything you could desire in clear text and accompanied by clear diagrams or photographs. 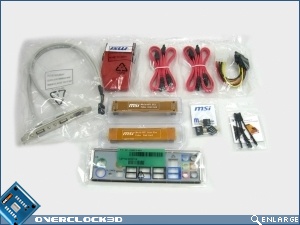 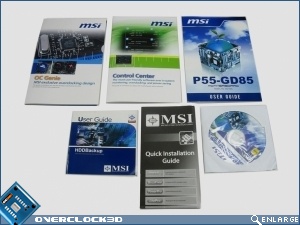 One of the handiest changes to modern motherboards is the inclusion of a block into which the various front panel connectors can be plugged before finally being placed on the motherboard. Anyone who's fixed their motherboard into their case and then attempted the phenomenally fiddly task of putting the LEDs and switches in will appreciate this.

The black lengths of cable on the right are extensions for the voltage measuring points. As to why we need extensions we'll discuss on the next page. 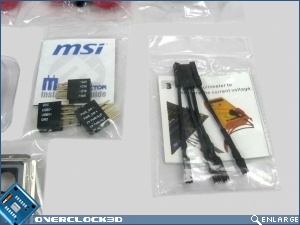 MSI have made sure that even once you've taken the GD85 out the static packaging you're reminded of the many MSI special features, especially the OC Genie. Personally I get a little tired of the "congratulations on purchasing... " thing. Stop trying to tell me what a great choice I've made AFTER I've brought something. Don't get me wrong though. It's not solely an MSI problem. 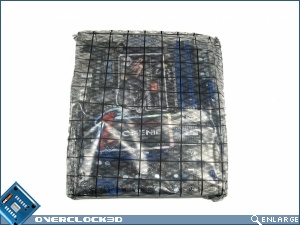 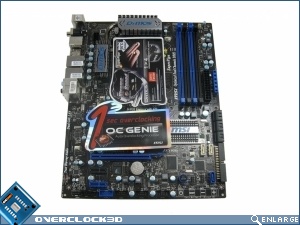 There are many features to cover on this fully-featured P55-GD85, so onwards.