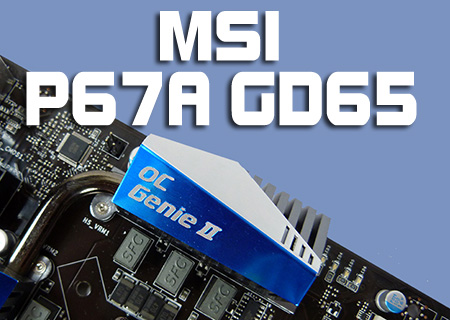 Once open the accessories bundle has all the bits you'd expect. SATA leads, IO shield, manuals for both the motherboard and the included utility disc. The utilities are comprehensive containing monitoring, overclocking, updating, and a wealth of other features in an easily installed, small footprint package. 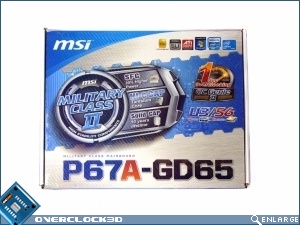 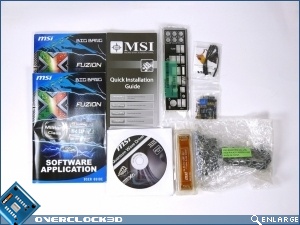 The board itself follows the modern MSI colour scheme of black and dark blue plastics with gun-metal hardware. It looks very classy although it's visually strange to not have the standard chipset cooler below the CPU socket.

PCI arrangement is fine with plenty of space between the two main PCIe slots. It's, as I said on the previous page, odd to see three PCIe x1 sockets and 2 legacy PCI ones on such a modern board. Sure the GD65 isn't the top-end model, but if MSI are going for the masses then why hasn't it got an IDE socket? 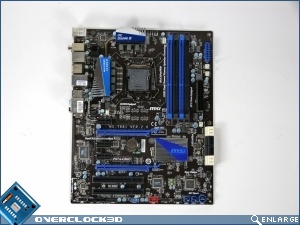 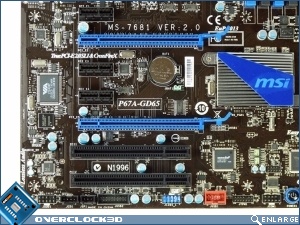 The bottom right hand corner has the on-board buttons for overclocking out of the case, and of course the magical OC Genie button itself. Just above the OC Genie is the JFP1 which is actually the front panel connectors. We laud Gigabyte regularly for their use of a colour-coded one, but to see one without even a plastic surround is perhaps a step too far in the other direction for our tastes.

Around the DIMM sockets we have the ATX24 pin as we'd expect and also a place for your probes if you're a high-end overclocker wanting more accurate monitoring of your motherboard. It's nice to see a couple of fan headers out here too which makes cable routing for your intake fans much simpler. 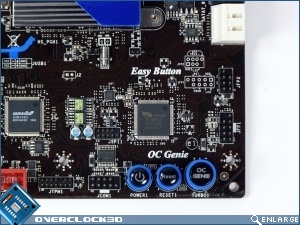 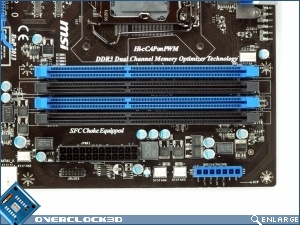 The CPU socket has plenty of room around it for even the largest cooler, although if you've got tall RAM and a big cooler the DIMM sockets are too close to be able to use both. Thankfully modern RAM doesn't really need the oversized heat-sinks any more. The down-slope of the MSI power circuitry heat-sinks are incredibly polished. 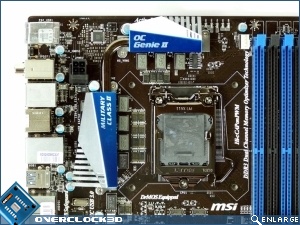 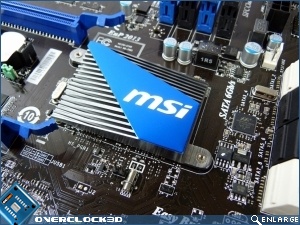 MSI have provided plenty of SATA headers for your storage needs and thankfully we haven't got any of those silly vertical ones.

Around the back is all you'd expect these days, including USB 3.0, e-SATA and a combined PS2 port. It's nice to see the CMOS clear switch located somewhere easy to get hold of too, for reasons we'll get to on the next page. 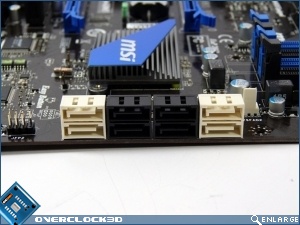 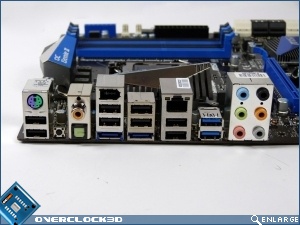 Aurus_OC
I am pretty disappointed by the results of this board. I expected it to be a great board at that price level. Well maybe next time MSI.Quote

Aurus_OC
Quote:
I just can't understand why it wouldn't boot at those speeds??

So perhaps the truly brilliant OC Genie will be the solution to the poor stock performance?

EDIT i must be fair i also hear people using it and its perfectly fine,

i guess my luck comes in again....Quote

I read in all these other sites about how awesome it was, but after seeing this I feel bitterly disappointed as well as being confused how it fared to badly here.

EDIT: Quite a few people seem to get 4.2GHz clock, so I guess MSI is being extremely conservative, in case someone got a half completed chip or something.Quote
Reply