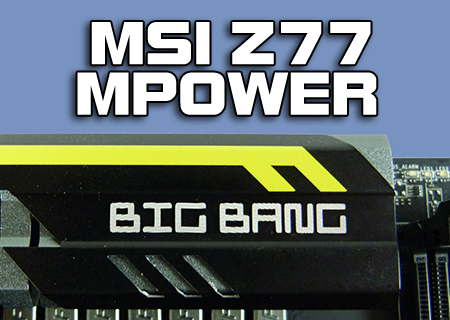 Unlike some other manufacturers, MSI have a clear division between each model in their range, from the lowly G45 up to the enthusiast GD80. It's a simple system with a bigger number meaning a higher end motherboard, and few branches off the path.

The Big Bang nomenclature is reserved for the highest models in the range. Where Gigabyte has a UD7, ASUS the 'Extreme', so MSI have a Big Bang. Each model comes with a different suffix, and today we're taking a look at the latest in their range, the Z77 Big Bang MPower.

Military Class III is the big buzzword with the MSI MPower. Polymer capacitors, Super Ferrite Chokes and MSI's own DrMos II ensure that the MPower really does live up to its name. The Military Class isn't just a bit of meaningless advertising blurb either. These components have passed the MIL-STD-810G test, which is the United States Military Standard for ensuring that items are tested to the very extremes, and thus worthy of use with the Department of Defence. Given how much of a pounding they'll get in the field, it's pretty safe to bet that they'll be indestructible on your desk.

With only three PCI Express slots, the MPower is designed more for realistic home use, rather than any attempts at Quad-GPU world records. PCI slots isn't the only area in which the MPower takes the 'less is more' route, as it's also without a 1394 port, only one LAN connector and no eSATA. For nearly everybody these aren't deal breakers, as they are features that most people ignore or even disable, but it's worth noting if you're heavily reliant upon a Firewire connection or similar.

SieB
Was expecting it to be more than £150, definitely a bargain at that price though.
I was going to buy this board but my GPU is dying, so I need to replace that first

Technology, why u always brake on me? :\Quote

murphy7801
Because you have a crap psu that causes ripple ?Quote

airdeano
after the GD65 review.. i was ready to plunk down the cash, until i heard of the
Power. the lil bells went off in my head and waited (not long) till MPower was
available. call me vain, but the MPower is worth the lil extra for the color scheme
over the GD65. the actual specs are user necessities. no extra frills, just needed
parameters to have. soon as i thin the inventories down, MPower, you are MINE!

Gurt11
Great motherboard! I'd pick one up with an i5 straight away if I'd have the cash