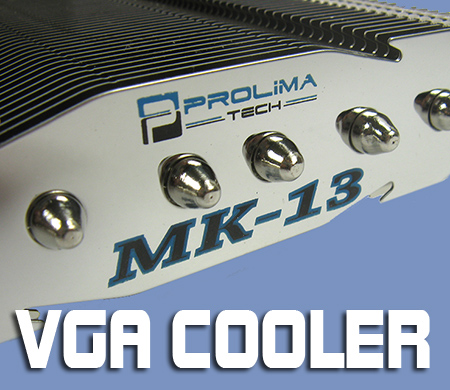 Following a prolonged period of finding a motherboard to suit and aligning our cooling lengthways rather than vertically it was time for the testing. After such a lengthy and frustrating installation period this really needs to deliver the goods.

Testing was done with a 3D Mark Vantage High run to simulate average GPU usage in a gaming environment. Fans used we two Xigmatek XLF-F1253 attached to a fan controller and run at 50% as is standard for OC3D. Vertical describes the fans mounted as in the photographs and as per normal coolers. Horizontal refers to fans across the card as you'd find in a side-panel fan.

It's certainly an improvement. Is it enough to rescue the MK-13?

There is so much to like about the Prolimatech MK-13. It looks fantastic with a gorgeous combination of nickel fins, large heat-pipes and black heatsinks. The ends are highly polished as you can see in the shot adorning the top of every page. Build quality is outstanding and everything fits together with a crispness that comes from a well engineered product.

It's almost the perfect product for a slack review site to be truthful. You could show the box, mount the cooler to your card, take a couple of photographs and right up to that point it's brilliant and worthy of whatever award your site gives out.

However the rest of it is beset with too many issues to overlook. The odd little foible is allowable because nothing is perfect, but when it gets in the way of the usability of the hardware you really start to take a close look at everything.

The instructions are abysmal. Truly woeful. If we compare it to a much simpler to install multi-format item like the Corsair H50, that came with separate instructions for every CPU socket in exceptionally clear wording and images that left no doubt whatsoever what should go where, in what order. By contrast the MK-13 is two sides of a bit of paper with a few very vague illustrations and none of the installation order is correct. If you were doing this "by the book" you'd end up with a graphics card minus a cooler gathering dust or, even worse, one without heatsinks on either the RAM or, if you're an ATI customer, the VRM.

Fan installation is by far the worst element though. The bar that holds the fans in place is far too short to comfortably allow the installation of two 120mm fans. The most irritating aspect is that Prolimatech clearly know this because they provide cable-ties (!) and mention that you might need them in the instructions. Cable ties. On a £50 product that doesn't come with fans supplied. Not good enough.

I could go on about how the PCI bracket to attach the fan bar to is either too large or too small, but certainly not the right size. How the cross-bar screws are so long that it really limits the motherboards you can install it into. How Prolimatech laughingly claim you can install TWO of these in a dual card system. But really it only needs to be installed once.

So let's pretend we've got it installed swimmingly. Is it cooler than the stock cooler? Well yes as you can see it definitely trims the temperatures down on our HD5870. The 5870 isn't known as being a particularly hot card though. Really the target market for this would be the GTX480 or similar, but when Prolimatech state that you should avoid overclocking when using it, you start to wonder what exactly it's for. It's not as if the use of two 120mm fans is quieter than the reference fan either.

Beyond all that though, far and away the single biggest design flaw is that this is a four slot cooler. Even the largest of cases haven't got more than 7 or 8 PCI slots and certainly only eATX motherboards might possibly give one spare PCI slot. So forget running SLI, or having a PhysX card, or a sound card, or.. well pretty much anything other than one graphics card with a cooler the size of Wales on it.

All in all the Prolimatech MK-13 is like Jordan. Nice to look at from a distance but up close the flaws shine and in the end it's not much good for anything.

Thanks to Caseking for providing the MK-13 for review. Discuss in our forums