It's official, AMD is launching their Ryzen 7000 series processors on September 27th, ushering in a new era for AMD with a new motherboard platform, a new core architecture, and a new 5nm process technology. The days of AM4 are coming to a close, and AMD is ready to deliver truly next-generation products.

Every new generation of AMD Ryzen processors has been significant, with every new core design delivering considerable performance gains and increased power efficiency. The move from Zen to Zen 2 and through to Zen 3 has transformed AMD, and with Zen 4 AMD plans to deliver some of their largest generational performance leaps to date.

What will Zen 4 deliver

With Zen 4, AMD has promised their users large clock speed improvements and a healthy IPC uplift. For the uninitiated, IPC means Instructions Per Cycle/Clock, which effectively is the amount of work that a processor can do per clock cycle. If two processors are running at the same clock speeds, let's say 4GHz, the processor with the highest IPC would be faster.

With higher clock speeds and higher IPC (more performance per clock cycle) AMD has been able to deliver up to 29% increases in single-threaded performance for their Ryzen 7000 series processors.

One thing to note about IPC

When AMD says that their Ryzen 7000 series processors deliver 13% IPC gains, they don't mean that users should expect 13% more performance per clock cycle in all workloads. AMD's 13% IPC gains metric is an average that AMD has calculated using a variety of workloads. In some workloads, AMD's Zen 4 CPU cores will deliver larger IPC gains, and in others Zen 4 will deliver smaller IPC gains. Even so, a 13% average isn't bad. 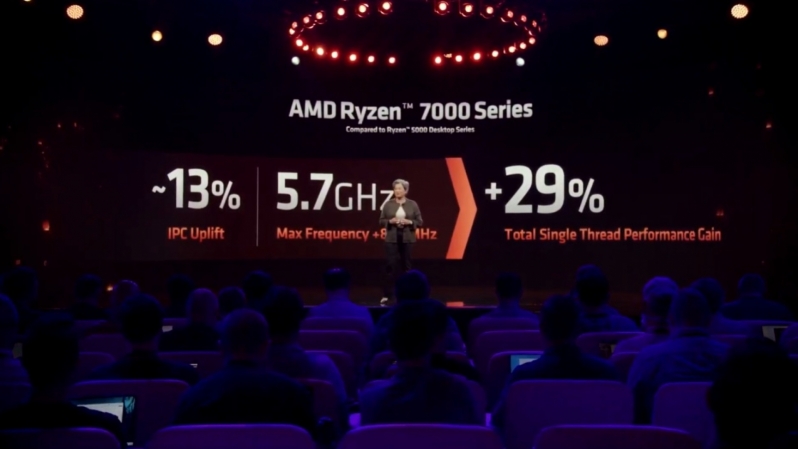 AMD is not increasing their core counts or thread counts with their Zen 4 generation processors. AMD's Ryzen 9 7950X will be a 16-core 32-thread processor, just like AMD's Zen 3 based Ryzen 9 5950X.

With their Ryzen 7000 series, AMD's generational performance gains will come from increased CPU clock speeds and IPC increases, not higher core/thread counts. This is great news for users, because all applications can benefit from increased single-threaded performance. While some workloads love having additional cores to play with, not all applications benefit from higher core/thread counts. In this regard, having performance gains come from IPC and clock speeds is preferable to having new CPUs with higher core counts. 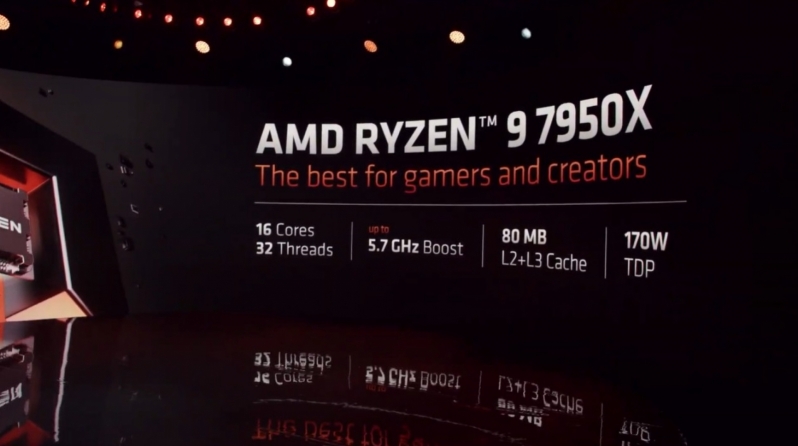 Below are the pricing and basic specifications of AMD's new Ryzen 7000 series processors and their Zen 3 based Ryzen 5000 series counterparts. Below we can see that AMD has not increased their CPU prices generation-on-generation, and that all models offer users significantly higher base/boost clock speeds than their predecessors.

With AMD's Ryzen 9 7950X, AMD expects a significant leap in gaming performance over their last-generation Ryzen 9 5950X, with the slide below showcasing 6-35% performance gains.

What's even more impressive is that AMD's creator performance has improved by 30-48% in the workloads shown below, making AMD's Zen 4 processors significantly more powerful than their last-generation counterparts. If these performance benefits apply to other workloads, AMD's Ryzen 7000 series processors will be a must by for many gamers and creators. 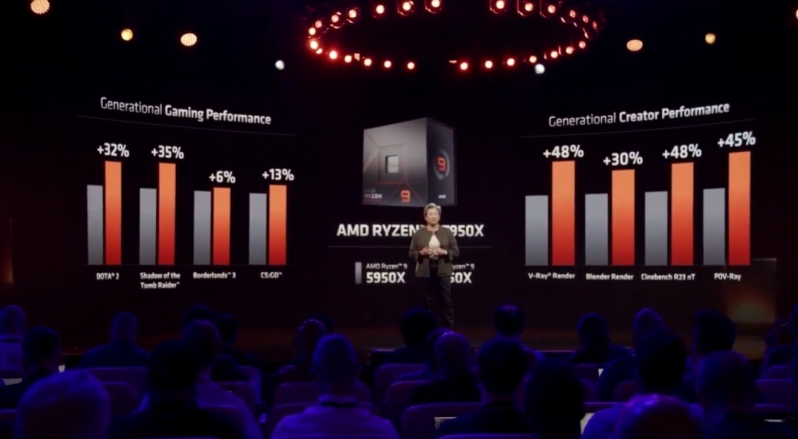 A jab at Intel

AMD is not shy about kicking Intel while they are down. When revealing their Ryzen 7000 series processors, AMD compared their Ryzen 9 7950X to Intel's i9-12900K, two 16-core desktop processors. To say the least, AMD's CPU hammered Intel's offering in the benchmark of AMD's choosing, achieving a 62% performance lead and 47% better power efficiency.

AMD's messaging here is clear, AMD wants to cement themselves in the minds of PC enthusiasts as better than Intel. We will have to wait for full reviews to see how true this is. 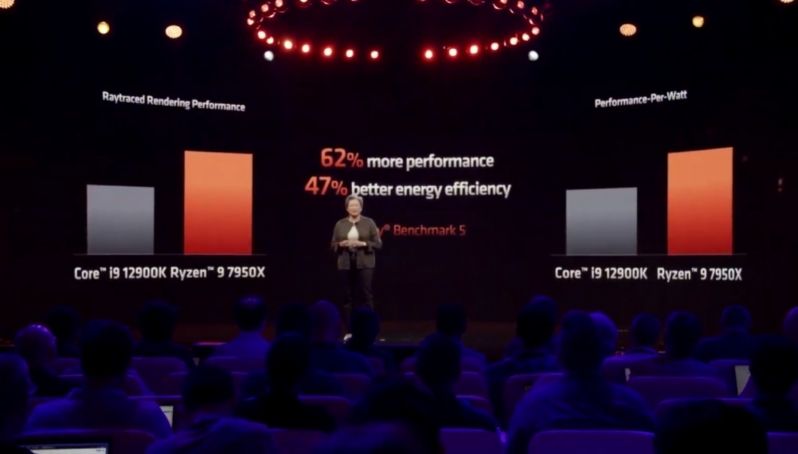 AMD's performance gains this generation come from IPC increases and clock speed boosts. Both of those changes deliver single-threaded performance improvements, and AMD was quick to show that their new Ryzen 7000 series processors can beat Intel's i9-12900K processor in Geekbench 5.4, a popular benchmark.

Single-threaded performance is often linked to gaming performance, so AMD is using these performance numbers to say that their Zen 4 processors have the "fastest core in gaming". 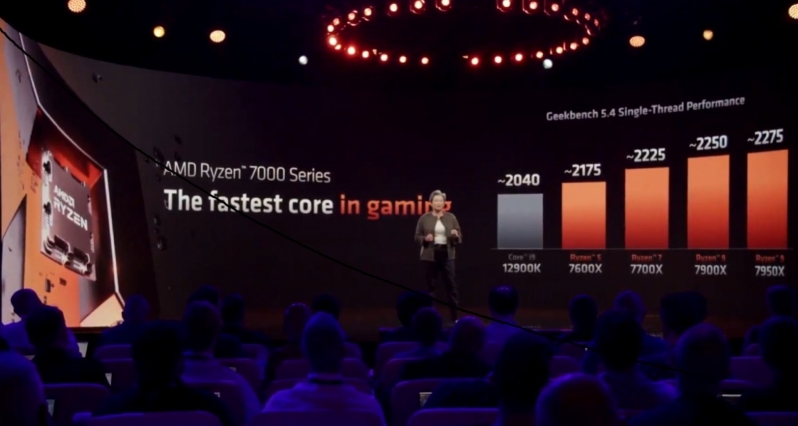 Where a Ryzen 5 can best an i9

AMD's single-threaded performance with Zen 4 is impressive, and AMD wanted to showcase this in games. To start off, AMD compared their Ryzen 5 7600X to Intel's i9-12900K in F1 2022, showcasing an 11% performance advantage.

With AMD's Ryzen 7 and Ryzen 9 models offering gamers more single-threaded performance, AMD could have showcased an even larger performance lead. AMD decided not to do this, instead showing their Ryzen 5 model beat Intel's current flagship. 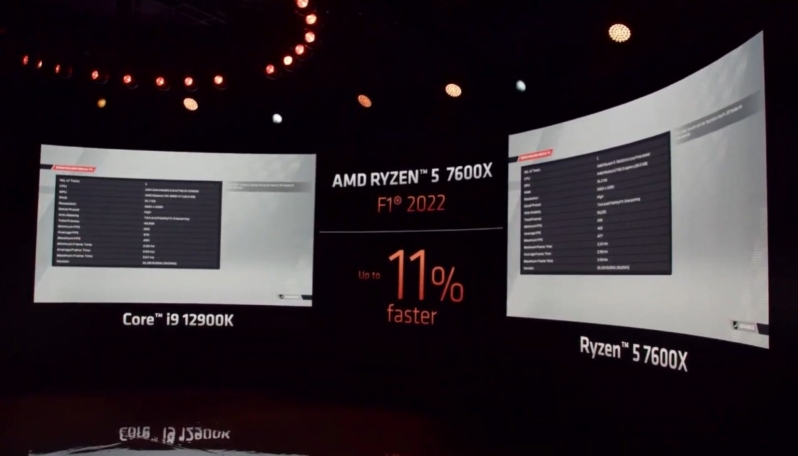 On average, AMD has claimed that their Ryzen 5 7600X can beat Intel's i9-12900K by 5% on average during gaming workloads. While this is not a huge performance advantage, these gains are available from AMD's Ryzen 5 model, and without AMD's V-Cache technology. 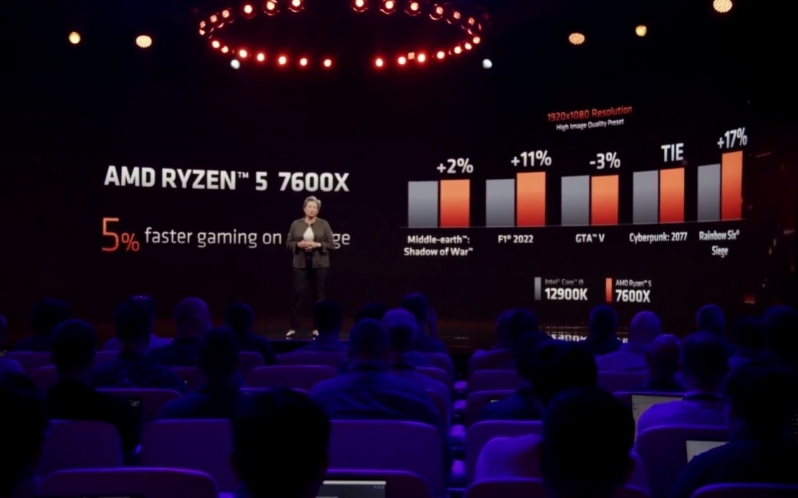 AMD's Ryzen 7000 series processors will launch alongside new 600-series AM5 motherboards. These new motherboards will feature AMD's new LGA 1718 socket, which can handle up to 230W of power delivery, and supports both PCIe 5.0 connectivity and DDR5 memory. AMD has also promised that their AM5 socket will be supported until at least 2025. 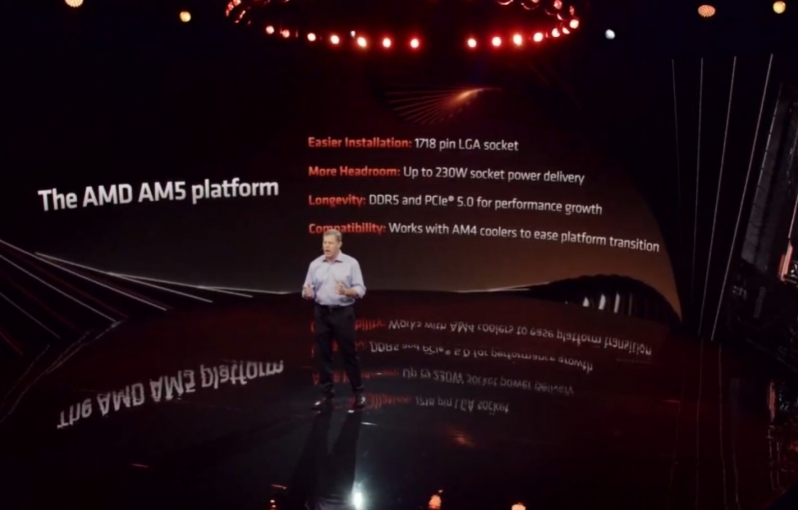 Gothmoth
what surprises me is that AMD did not say a single word about integrated graphics.


as i use many of my systems as render slaves it´s a big deal for me.
until now i always needed an extra GPU for my systems, for troubleshooting.
most of the time i use RealVNC to administer the systems but sometimes you need direct access to a system.


i would expect AMD would at least say "and hey, we also offer an integrated graphics solution with the 7000x series".Quote

ET3D
Type:
Quote:
By the way, one interesting tidbit that wasn't mentioned in the presentation but is mentioned on the product pages is that each CPU has an iGPU with 2 CUs running at up to 2200MHz. Seems to me like this will lose to the Intel iGPUs, not that it matters that much.Quote

AlienALX
I'm not surprised the 7950x bashes the 12900K. Not at all. The KF only has 8 performance cores and threads.

When Intel can physically fit 16 of those onto a CPU? yeah, check the benchmarks then.

It's long been common knowledge that AMD would dominate Intel on higher core models, because of physically fitting stuff under the lid. This became apparent when they released the 3000 series. It was nearly as fast as the competing Intel in games, but slaughtered Intel on core counts and overall performance.

Until Intel manage another successful shrink that will remain in place.Quote


i am really curious to see benchmarks by hardware unboxed and co.Quote

AlienALX
Quote:
Does it? no one knows yet. All we are seeing is AMD's cherry picked titles like F1 and etc where they were in front any way.

However, as not to avoid your question? no I would not be surprised. It has higher IPC than the 5000 series, games only really seem to want 6/12c/t and the clock speed is much higher than I thought it would be. Something AMD have been struggling with.

That said? it remains to be seen the actual performance. Because like I say, looking at another thread showing performance it all seems to be their cherry picked games.Quote
Reply