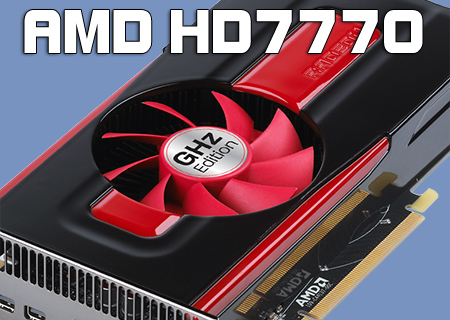 Cards positioned at the £100-150 price-bracket have a very tough time indeed, such is the wealth of options available and the compromises that have to be made to get your GPU down to that price-point. This is especially true as time marches on because the previous generation of cards get ever cheaper, whilst the performance that they offer doesn't change. So, for example, the HD6790 which was a reasonable performing card at the time is still that now, but a bunch-load cheaper than it was at launch. The GTX560 (in both stock and Ti variants) are exceptional performers and now available right in the middle of that price-bracket.

According to the AMD literature the HD7770 is marketed at the GTX550Ti. According to the pricing it's actually up against the GTX560Ti and therein lies the big problem. Its performance is akin to the GTX550, or the HD6790, so why would you spend the extra money to get something that performs in a manner similar to the cards in the price-bracket below, and is stomped by cards available for similar money with nearly identical features such as the GTX560Ti or HD6870? The HD6870 is a particularly thorny issue for AMD, as it's about the same money, is still a DirectX11 card with all the Eyefinity support and the like, but with better performance and is from the same company. It is one thing to be beaten by a rival, but beaten by something you've already produced?

It's not all doom and gloom though. The HD7770 just has a very niche audience.

If you want a card that would be perfect in an HTPC setting, this is definitely a great choice. It's really low-power and as near to silent as makes no difference. Plus you have all the outputs necessary to plug it in to whatever display you desire. If you don't care two hoots about gaming and just want a card that can pump a display out to six screens for your design work or whatever, then once again it's a great choice. If you don't mind casual gaming and will play on a 19" screen at medium settings, it will suit you perfectly well. Although of course so will many other cards that cost much less.

So if you're a hardcore gamer, it's probably best to look at the GTX560 or HD6870 for a start, depending upon your loyalties. If you just want something that is quiet and fits in your HTPC setup with no gaming required, there are plenty of cards that will do that, at less money (the HD7950 for one).

But if you want to game a bit, and yet still have many screens running, and want silence, and want something new that is low-power, then it's worth taking a look at the HD7770, and for that it just about scrapes our Bronze award.

Thanks to AMD for supplying the HD7770 for review. Discuss in our forums.

Ruthless
Quote:
not much to get excited aboutQuote

yassarikhan786
Really disappointing card. As you said in the conclusion no point in getting it over a 560 or 6870 for gaming purposes. The noise and power aspects are the only pluses about this card :/Quote

If it wasn't for these cards being priced as high as they are, they would be much better because price to performance would be good, but at the moment it's not. I just hope when Nvidia launches Kepler the prices even out, for now i'll stick with my 6850.Quote

Lollipop
The card is a bit.... meh.Quote
Reply